I've been so obsessed with the chicks lately that I have neglected to write about my other girls, the honeybees: 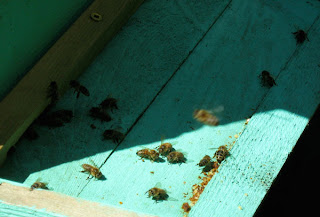 Here they are at the entrance to one hive. Two weeks ago I put in several frames of drawn comb (that's beeswax that the bees have already turned into honeycomb; saves them a lot of work compared to drawing out comb from flat sheets of beeswax foundation.) The crumbly bits towards the bottom right are debris that the girls have cleaned out from the drawn comb I put in. Bees are highly fastidious, keeping their hive pristine. They even have "undertaker" bees who carry out the dead. "Bring out your dead! Bring out your dead!"

Bees generally don't allow intruders into the hive and will attack things like bumblebees and wasps that try to get in, but if something big like a mouse or snake enters (as they sometimes do), the bees will sting it to death, then cover it in propolis. Because they can't drag out something as large as a mouse, propolis is used to encase it completely, rendering it sterile. Bees also use propolis to seal cracks in the hive, among other things. Read about it on Wiki.

Here's an upsidedown honeybee cleaning wax or propolis (not sure which) off a shim that was in my previous hive set-up. These girls don't waste anything! 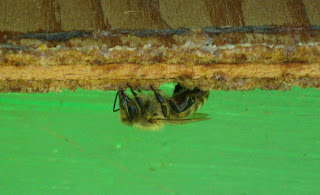 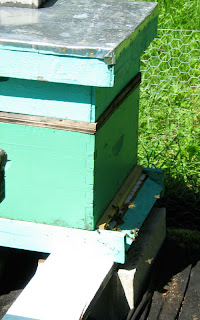 Normal activity at the hive entrance. Right now I have entrance reducers on the hive, which help protect a small colony from being robbed by other bees/honey-loving insects. You might have noticed my hives looking different in previous blog posts. I have two very nice new hives that are D. E. hives instead of the standard Langstroth. But my bees came on Langstroth-sized frames, and I had intended to switch them over to the D. E. hives this year. But we've had such a crappy summer, weather-wise, that my beekeeping mentor suggested to me that I just concentrate on letting the bees fill up one deep (box) each this season, and then we will overwinter both hives in our barn, as the colonies are small and need that added protection from the weather. Normally you wrap and insulate the hives, and leave them out all winter. The bees maintain a constant interior temperature by clustering together.

If you want an indication of how poor the nectar flow has been this year (due to the record-breaking cold, wet July we had, not to mention the cold and crapacious June weather and the dubious May), here's a statistic: around mid-July last year, my beekeeping mentor had harvested 4,000 lbs of honey from his 39 hives. This year? NADA. ZIP. NOTHING. No harvestable honey as of mid-July. (You always leave the bees enough honey for their own needs, then add shallow boxes on top of the deep ones for the bees to fill with honey that you later steal.) I picked just about the worst year possible for starting beekeeping, but that's okay. I'll hope for honey next year. My goal is to build the colonies up as much as possible and get them through the winter. 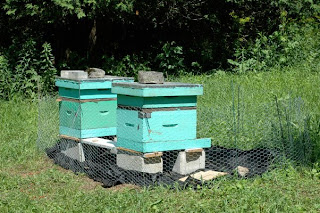 My two hives, with chicken wire to keep the skunks out. Skunks love to eat bees. They will go up to the hive and knock on it at night until the bees comes out to investigate. When they do, they became skunk-snacks. A robust hive can take a few skunk attacks, but colonies that are small like mine need more protection. Another solution is to lay nail-studded boards, sharp end up, in front of the hives. I plan to do this after Gordon gets the nail gun he's hankering after.

Bears are also a conceivable problem around here, but black bear sightings are uncommon in my area, so I haven't put up an electric fence yet. I may move the hives closer to the house next season anyway, so for now I am taking my chances. Nothing less than a high-powered electric fence will keep a bear from honey. 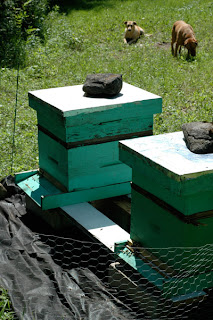 The dogs love to come with me when I visit the hives, and they have quickly learned (being fairly obedient) to keep their distance. It's really hard for Sophie, who loves to catch and eat honeybees, bumblebees, wasps... she has eaten so many I can only think she has built up quite the immunity to their venom! 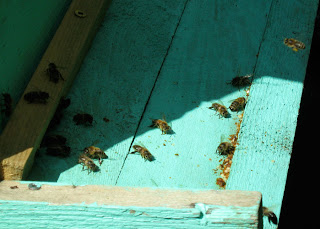 If you click on the photo to enlarge it, you can see the full pollen baskets on the hind legs of the bee flying in at the top right. Bees do have little "baskets" on their rear legs that they pack full of pollen when they are out foraging. It's a good sign to see pollen going into the hive, as they use it to feed their young.

I've had quite the drama down at the hives since installing the bees on June 24th. First off, the bees in the "west" hive offed their queen and made a new one. (Perhaps it was "cuddle death.") They'll do that if the queen is injured or not a very good egg-layer. It's also possible their queen was killed in transit from my beekeeping mentor's place to mine. Queen bees apparently don't travel well. Anyway, my mentor saw the new queen and said she's bigger than the one he supplied, which is good.

Then two weeks ago, I opened up the "east" hive and the queen was sitting right on top of the frames with her attendants. I was quite excited because it's sometimes hard for new beekeepers to find the queen. I carefully closed up the hive so as not to damage her, and decided to come back the next day to put in the frames I'd been planning to install.

So the next morning, what do I find? A dying queen on the ground in front of the east hive's entrance. The bees had unceremoniously tossed her out, for whatever reason. Queenie expired as I watched. I brought her corpse home with me, but my damn cat Naomi ATE it when I wasn't looking!

So in the space of about six weeks, my bees have re-queened both hives. Not necessarily a bad thing, since the initial queens were small and my mentor thought I should perhaps replace them anyway. Such drama in Beeland.

I haven't inspected them for two weeks but plan to open things up next week on a sunny day and see what the heck is going on now. From viewing the outside activity, I think things are just fine but I want to check that the queens are alive and laying eggs.

There now, wasn't that a nice change from chickens?

And as a total non-sequitur, here is the pillow my friend's 12-year-old daughter Rachel made me. She is learning to quilt and did a beautiful job: 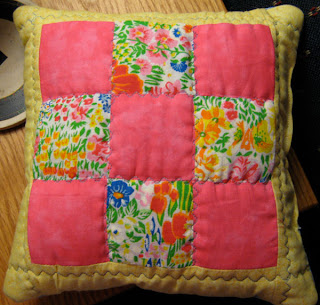 My friend, her hubby and their four kids visited from Maryland last week for four nights and we had a great time. My friend and I met each other almost thirty years ago when we became penpals (remember those?) through a US-based penpal catalogue. Over the years we have become close friends and see each other regularly. For the first couple of decades, we wrote on good old pen and paper, which morphed into faxes, then emails.

Rachel also made me the most beautiful beaded honeybee, which I have to photograph and get on the blog. And her 10-year-old brother made us these great Fimo sculptures, including one of a bear attacking a moose which I absolutely have to get up on this blog because it's not only great, it's hilarious.

And now I need to go visit my chicks. Happy weekend!