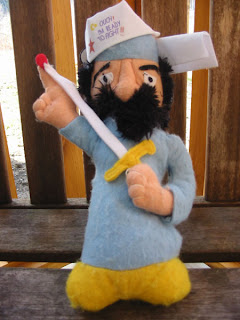 I didn't make this up. He's a dog toy with bone inside. Apparently the covering is edible and safe for dogs, but I think I'd just want to keep him for posterity. Anyway, he is going to a friend of mine in California. He cracks me up every time I look at him. Should you wish to acquire one of your very own, visit the Bony Babies site. (No, this is not a paid endorsement. I do not do paid endorsements. Anyway, who in their right mind would offer me money to endorse them??? Apart from Yorkshire Gold tea, perhaps. Ahhh, must get a cuppa!)

And I bring to you Julius, aka Mr. Fluffy, aka Fluffalicious, aka Fluffmaster J, aka Agent Orange: 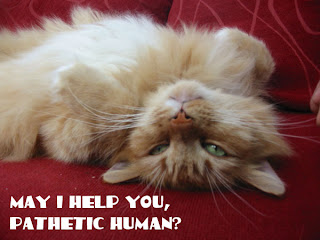 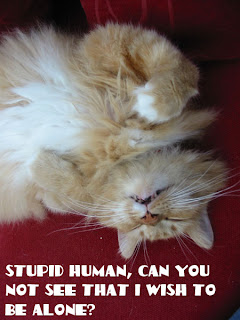 Have a good day, readers.
Posted by Knatolee at 8:17 am 4 comments:

Can I say that any more emphatically?

Most days, I go for a 45-minute walk along the main road near our house. I pass a lot of trees, a beautiful lake, some nice birds and animals (saw a muskrat Monday) and not a lot of houses and cottages. What I do see a lot of is garbage that people have tossed out their car windows. And that makes me really, really mad. Because if we can't even stop ourselves from throwing crap all over the road, how in the name of David Suzuki are we ever going to be able to stop the environmental crisis enveloping our world? (because I know Stephen "Helmet head" Harper and his useless environment minister John "Scare Tactic" Baird sure as hell aren't going to be doing it!)

Several decades back, when I was just a wee thing, I wrote a speech called "Ecology" and made it to the school finals in our annual public speaking contest. When I was even younger than that, my parents taught me that littering is a cardinal sin. You just do not EVER throw your trash on the ground. There are plenty of garbage cans around, and you should use them. PERIOD. If you don't, you're a disgusting little slob. This is Canada. Most of us have FREE garbage pick-up at the flaming curb, fer cryin' out loud.

So every day I am appalled by the amount of man-made crud in the ditches and on the shoulders of the road I walk on. Most of the trash is in one of two categories: food packaging, or cigarette-related paraphernalia. The list is long: Cigarette packs. Cigarette butts. Old lighters. Beer cans. Beer bottles. Wine bottles. Pop cans. Juice boxes. Styrofoam take-out food containers. Cardboard take-out food containers. Frigging wrappers galore. A lot of McDonald's bags and related CRAP.

Yesterday I just about blew out an aneurysm when I saw a McDonald's bag, a Big Mac box, a cheeseburger wrapper and a fries box blowing around the centre of the road. Some ass had clearly just tossed it out the window. What was also blowing around was this: 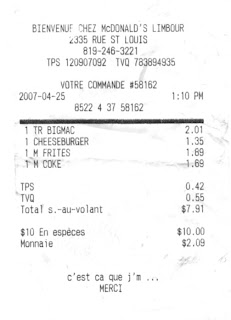 Looks like a single, very hungry moron visited the McDonald's on St. Louis in Gatineau, ingested a Big Mac, cheeseburger, medium fries and a Coke, and vomited forth the packaging (and receipt) as he was sailing down Rue Buckingham in whatever vehicle it is that hungry littering morons drive. I guess he or she just didn't want to sully the pristine interior of his or her vehicle. I guess he or she was just TOO DAMN LAZY to put his or her CRAP in a garbage can.

I won't get into my opinions on fast food, other than to say I stopped eating it after I read Fast Food Nation. I think what you eat is a highly personal decision that is yours alone to make. However, I do feel compelled to criticize those who throw TRASH out their vehicle windows. What is wrong with you? What makes you so special that you can't save your crap for a garbage can? My Mum had a word for that: LAZY.

What really kills me is that I bet most of these slovenly people have or want children (and are teaching their innocent kids that it's fine to throw trash on the ground!) Certainly most of the people currently polluting the hell out of planet Earth have children. I just cannot understand this overarching lack of concern for the shape we are leaving this planet in for future generations. Hey, I don't even have kids, but I care what happens to our world. You littering types clearly don't. And you should. You should care because your little ones will be here long after you have shuffled off this mortal coil.

Maybe you won't switch to a more fuel-efficient vehicle. Maybe you won't turn off your vehicle engine when you're sitting for more than three minutes. Maybe you won't stop buying things you don't need. That's fine. But could you at LEAST not throw your garbage out the window of your car?? PRETTY PLEASE?

As for me, I feel guilty walking past this trash every day without picking it up, but when I walk, I walk fast and am trying to get some real exercise. If I stopped to pick up every piece of crap I saw, my walk would turn into a turtle-paced two-hour one. However, I do plan to go out with a big green garbage bag sometime very soon and pick up after all you weenies who can't pick up after yourselves. It pisses me off no end to have to do that, but I'm not doing it for you. I'm doing it for this poor suffering planet.

Rant over! Thanks for reading. And thanks to all of you, fortunately the majority, who put their trash in trash cans instead of heaving it out the window.
Posted by Knatolee at 8:46 am 8 comments: 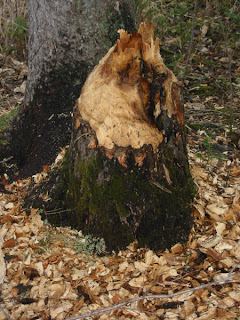 Yes, it was a busy weekend for the beavers who have a lodge at the edge of our property. They managed to bring down a very large tree, after much gnawing: 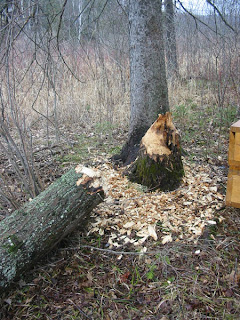 Fortunately, the tree fell away from the brand-new dock our landlord built last fall (and has on dry land until the spring thaw is complete.) And the large hole in the tree next to the stump was made by a pileated woodpecker looking for insect treats: 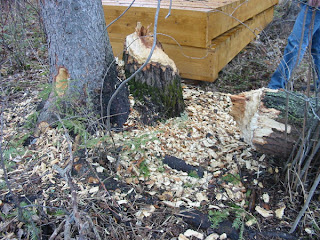 I can't believe how fast this tree went down. We never even heard it fall, if we were at home at the time. Here Gordon surveys the veeeeery long tree and marvels at the cutting ability of big beaver incisors: 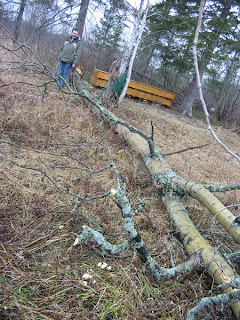 Poor tree! The birch on the left has green fencing around precisely to keep the beavers from lunching on it. They already make off with any branch that dares to stick through the fencing! 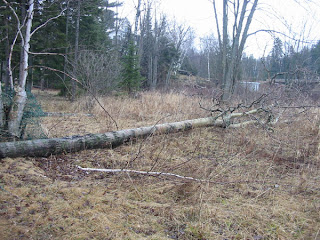 When beavers fell large trees like this, they are mostly interested in the tasty young branches closer to the top. They tend to leave the large part of the tree where it is, but they'll strip the top bare. Nummy, nummy.

The local cottagers on this lake get ticked when the beavers dam things up under the bridge, so every winter somebody sends out trappers. (I'm not clear on who does this but I think the municipality may pay them.) The trappers were here many times this winter on our property, which is the only place with land access to the lodge. Nice pair of guys who seemed to know what they were doing. However, I did not want to KNOW what they were actually doing.

Frankly, I am glad that the beavers have outsmarted the trappers. I have learned that trapping is just not an effective way to deal with the problems caused by these humungous rodents. There are alternatives! Let's just say that if we owned this place, we'd be forcing people to use the more effective alternatives instead of letting them trap on our property.

I wouldn't necessarily be against trapping them if it were actually EFFECTIVE and there weren't alternatives, but it's not, and there are.

So three cheers for the beavers, symbol of Canada: big hairy rodents that gnaw constantly and live in a lodge and dam a lot. Yup, that's us Canucks. But I do feel sorry for the tree.

ADDENDUM: Somebody asked for more info about options other than trapping. They do exist!

and here is an article about the device I saw on a good TV programme about beavers, the Beaver Deceiver:

And another useful article:

http://www.beaversww.org/solutions.html
Posted by Knatolee at 8:09 am 5 comments:

I'm not keeping up with the blog! Right now we are attempting to purchase an 86-acre farm. If that works out, at least we won't have to spend our weekends farm-hunting anymore!

Anyhoo... I do have some interesting bird stuff for you loyal viewers. As you can see, most of the snow has finally melted. Yay! What birds can you spot in this photo? 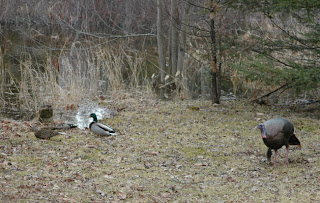 That's right, from left to right, you have Mrs. Mallard, a wood duck, Mr. Mallard, and a wild turkey.

The wood duck is gorgeous and considered perhaps the most beautiful duck in North America. Now we have a pair of them hanging around, as well as the mallards and black ducks, and this week I saw a pair of hooded mergansers on the water behind our house.

The wood duck apparently has no fear of the turkey, not that the turkey ever seems to notice or care about the ducks: 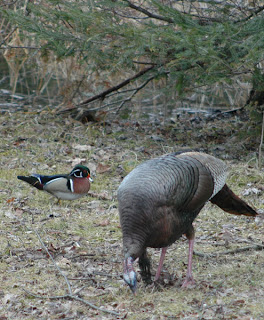 And here we have SQUIRZILLA, or rather, one of the several Squirzillas in our yard. Yesterday I saw one of this little monsters make a running body slam against my beloved pair of wood ducks, to get them away from the birdseed he wanted! The poor ducks fled back to the water after the evil rodent broadsided them. I regularly see red squirrels kick birds out of the feeders (my hubby recently saw one eject a crow from feeder by creeping up and pushing on his feathered behind!) and chase away the mallards, but yesterday was the greatest act of Squirzilla violence I have yet witnessed. It's shocking what goes on in this yard, truly shocking. 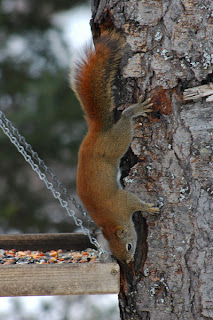 (And yet, I secretly like the squirrels and make no effort to keep them from the feeders! Shhhh!)

Meanwhile, back in the house, Julius drinks from his favourite water fountain. His humble slave, aka ME, turned the tap on for him: 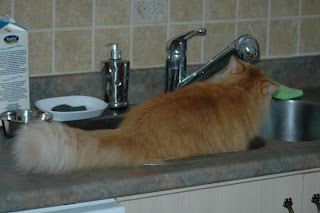 I would like to be a cat with human slaves.
Posted by Knatolee at 7:19 am 3 comments: