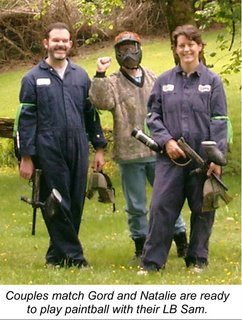 The boy and I volunteer as a "Big Couple" for Big Brothers Big Sisters (fun! You should volunteer too!) A couple of weeks ago, we went to play paintball. Turns out I am a natural born killer... I LOVED it. I mean, really really loved it. A little too much. And I was good at it! I never got shot, and I killed several others. At one point, I could have killed the referees, I was so well hidden. They were actually LOOKING right at me in the forest, and they couldn't see me. The referees repeatedly warned us NOT to take off our face shields while in the field, and what does Mr. Referee do when he's looking for me? Lifts up his face shield. I coulda had him. I COULDA BROUGHT THAT SUCKER DOWN! Yeah, baby! But I restrained myself.

I thought I was going to have a heart attack at one point, there was so much adrenaline coursing through me! Can't be good for my blood pressure.

The two other over-40 woman who came with their little sisters both refused to play when they learned the true nature of paintball (i.e. you might get shot. Or marked. Or dirty. Or whatever.) Sissy girls! Girlie girls! Wimps! I was proud of myself for representing over-40 womanhood in the sport of paintball. I am WOMAN! Hear me shoot!

Of course, in family-friendly paintball, they don't use terms like "kill" and "gun" and "bullet". Ahem. But some of us just got a liiiiiittle too intense. Ahem. I'm sure I don't know who that would be. Certainly this little nature-lovin' pacifist. Oooh no. Not me.

Ya know, I could be one of those soldiers who go into the jungle and never come out again...

PS There were lots of coveralls there with the name "Trevor" on them. Gordon and I were both "Trevors" in the photo above. I wonder who Trevor is? I had a little teddy bear named Trevor once.
Posted by Knatolee at 2:14 pm 3 comments:

The sucker went on the market today. I am so relieved! We cleaned it and organized it and staged it to the hilt, so I hope it gets snapped up quickly...

Then:
"Show Me Properties"

then scroll down to us, the new listing on Armstrong. 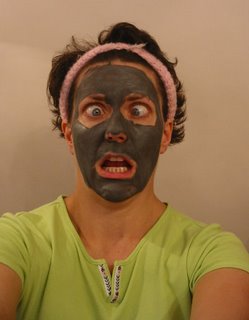 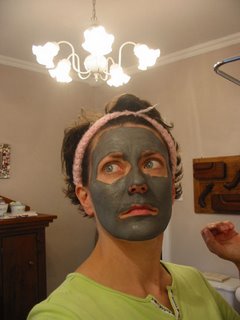 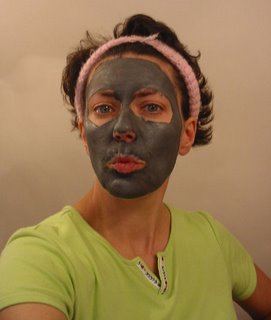 You get an entry today because the dog got me up really early and I don't feel like going out and trimming the hedges yet. We hope to have the house listed by Monday!

Anyway, a couple of weeks back I got bored after putting on a face mask our friends brought me back from Fiji. I think you can plainly see who will be Canada's Next Top Model!

Incidentally, that pink headband was knit or crocheted by my Mum at least 30 years ago. Acrylic lasts forever! I will never part with it. :)
Posted by Knatolee at 10:19 am 6 comments:

You'll be happy to know I'm not dead. At least, I HOPE you're happy to know that. We are drowning in "get the house ready to sell" work. It's gonna kill me. I am almost finished regrouting the white-tiled kitchen counters. We figured that brownish, stained grout with pristine white tiles wasn't exactly a selling point. So now the grout is new and white and no one (read: Gordon) is allowed to use the counters until we've sold the house. And just in case, I'm damn well covering it all with chopping boards and wax paper and whatever else will spare the grout from the wrath of he-who-knows-not-how-to-wipe-a-counter.

The grouting was strangely satisfying, even if all that chiselling-out of old grout did reactivate my recurring shoulder injury. And I hurt my lower back on Wednesday when I had a coughing fit whilst bending over. This particular place on my lower back is my "Achilles heel" and if I am going to injure any part of my body, this will likely be the spot. I feel fricking old.

At any rate, I was mobile enough to finish my grouting, despite starting today bent in half. Last night I spent four hours on the couch, wishing Gordon weren't away on business because I needed someone to feed me grapes and rub my feet.

On a brighter note, my trampoline-loving neighbours just sold their house in a WEEK for $100,000 odd more than they bought it for less than a year ago. The real estate market in this town is INSANE. I am secretly hopeful (well, no secret, really) that we are going to make a killing on our own house. We shall see.

I am going to walk the neglected dog, then accomplish something from our list of "5,821 things to do before we list the house", aka Chore-o-rama.
Posted by Knatolee at 6:24 pm 3 comments: 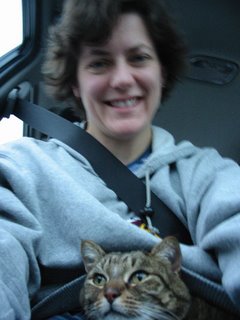 Yep, Zoe got out of the crate once in a while too. She likes sleeping inside my sweatshirt. Here she is peeping out!
Posted by Knatolee at 7:58 pm 3 comments: 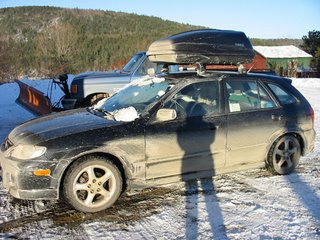 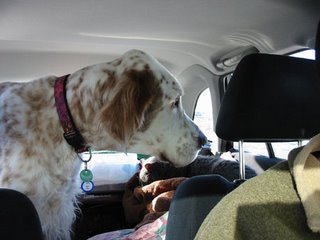 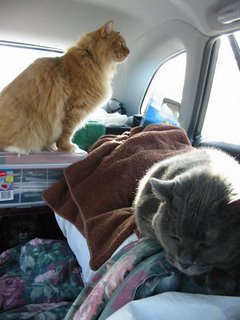 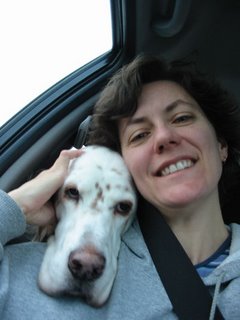 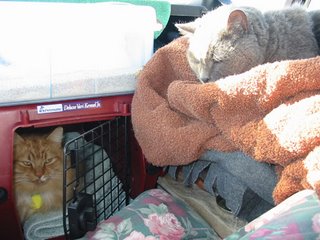 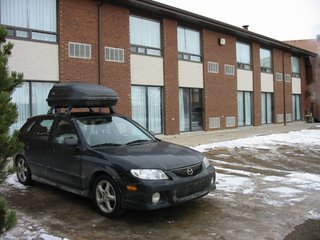 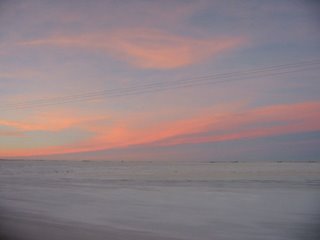 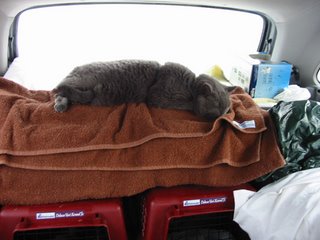 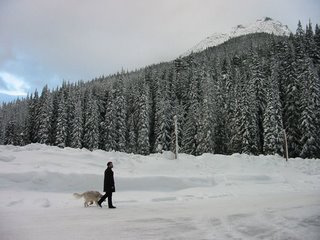 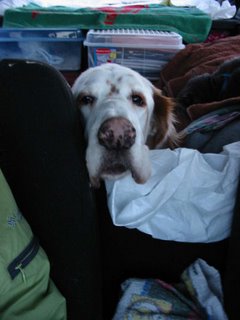 If you subtract a day for the blizzard, and the redundant 200 km, we averaged about 750 km a day. And now we're doing it all again. Don't tell the pets!
Posted by Knatolee at 3:57 pm 5 comments: