Don't trifle with me! 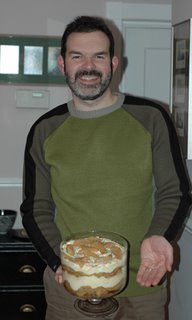 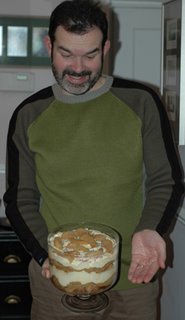 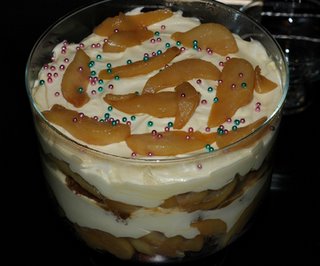 The hubster made an awesome dessert for Christmas. It's a caramelized-pear sabayon cream trifle. Basically it involved caramelized pears, champagne, cream, and pound cake. Yummmmmy!
Posted by Knatolee at 1:07 pm 4 comments: 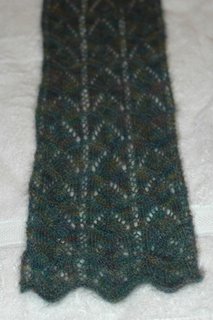 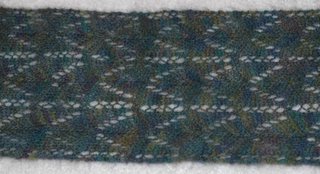 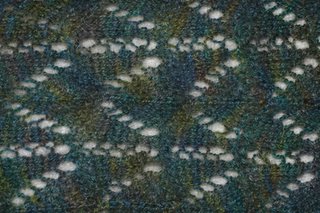 This year, I thought I would earn daughter-in-law brownie points, and knit my mother-in-law a nice scarf. So I ordered this hand-dyed qiviut blend from a store in Whitehorse called Folknits
I had never knit lace before, but I thought, what the the heck, it will be a learning experience.

Er, no. It was KNITTING HELL! Quite apart from the fact that I made four billion mistakes (mostly all corrected), I had almost finished the scarf when I realized I had missed a knit row, so that the pattern was on the wrong side for half the scarf! Oh my GOD.

I unpicked the whole thing and re-knit that sucker in ten days. I finished it December 23 and was amazed at myself.

The yarn is 45% qiviut, 45% wool and 10% silk. Qiviut is made from muskox fur and is about eight times warmer than wool, and incredibly soft. It was LOVERLY to work with. Too bad I had such a hard time with the pattern!

I learned some valuable lessons from this nightmare, I mean, project. They are:

-Do not knit a lace scarf after sundown. You may think your eyes are 16, but they are really 41.

-Do not knit a lace scarf while allowing your attention to drift towards the rerun of Gilmore Girls on TV.

-Do not knit a lace scarf before you have had breakfast.

-If you are knitting a lace scarf, and have successfully completed a 12-row pattern, and your brain is telling you not to tempt fate by continuing to knit that day, LISTEN TO YOUR BRAIN!

-Do not knit a lace scarf when you are mad at your husband.

-Do not knit a lace scarf when your pets are irritating you by demanding constant attention.

-Knitting a lace scarf will cut ten years off your life. You've been warned.
Posted by Knatolee at 12:51 pm 3 comments: 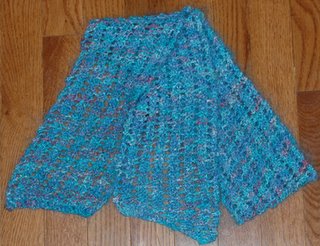 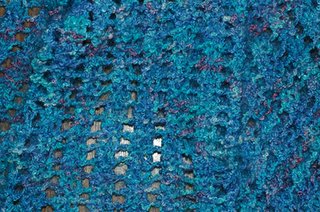 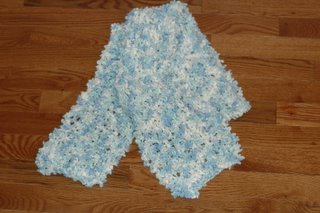 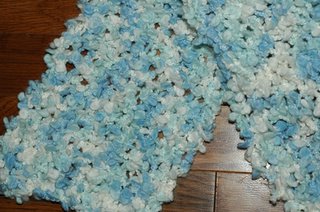 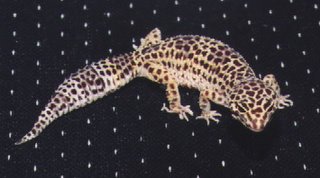 The latest in Christmas knitting, now mailed off. The bottom blue "fluffy" one is for my friend's daughter. It is Patons Pooch, in "Big Sky" or something like that. Her favourite colour is blue. This was simple to knit on two huge needles.

The other one is another Fleece Artist/Hand Maiden creation. It is silk and kid and something else I have forgotten and am too lazy to look up!

Alas, unlike some people, I do not have a lizard willing to model my scarves. If I draped one of these over my leopard gecko, she would surely smother!
Posted by Knatolee at 9:57 am 3 comments: 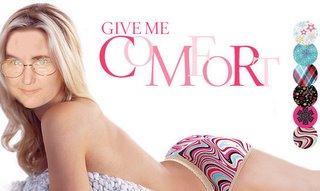 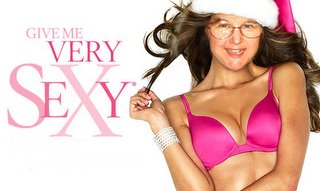 Yesterday, my office was truly a sty. I mean, a dangerous sty. Things were falling off my desk!

It was a sty because I was:

1) knitting a pink shawl
2) hooking a goldfish rug
3) hooking a coffee cup rug thing
4) wrapping a birthday gift
5) wrapping Christmas gifts
6) looking through my knitting patterns
7) hemming the burlap on the coffee cup rug thing
8) ironing a lace cloth
9) working on some dude’s website
10) drinking tea
11) answering email
12) painting a Christmas gift
13) taking photos with the digital SLR
14) eating and dropping crumbs in my keyboard
15) researching kidney disease for my MIL
16 )marvelling at the weenie inch of snow we got yesterday, which freaked out my fellow weenie British Columbians, who think you need chains to drive through an inch of snow. They wouldn’t last ten seconds in a Nova Scotia winter!

And cats rule my office, in particular, my table:

The cats pics are a bit fuzzy, sorry. Julius is the orange one and Zoë is the fat one. This all started a couple of months back when I made the mistake of putting that leopard-print cat bed on my table, under the desk lamp. Instant kitty tanning salon! That bed is constantly occupied by either Julius or Zoë.

God forbid they should have to, say, sleep on the floor!

I am running out of workspace on this table. However, you can see that I *did* manage to clean my office by the end of yesterday!
Posted by Knatolee at 8:06 pm 1 comment: