Kitten roller coaster aka the week that broke my heart

I have turned off commenting for this post as I am sick of Spammers leaving their crap here on this sad post. Screw you, Spammers.

So April 12,  I took in a beautiful cat named Agnes, and her six adorable kittens... 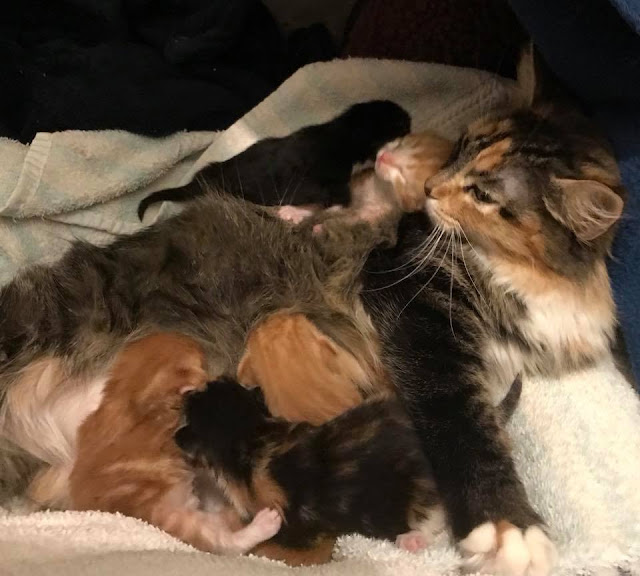 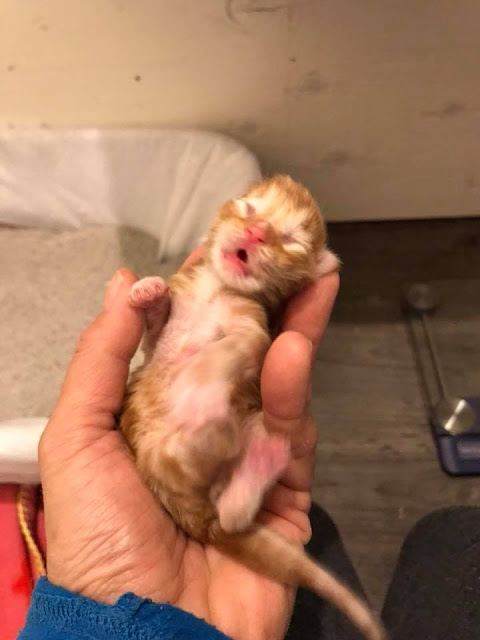 This little fellow was the first to go.

Everything seemed okay when they arrived, although Agnes was a first-time mama (who came to me from Operation Spay + Neuter in Hawkesbury) who not had the best of care before arriving at OSN. 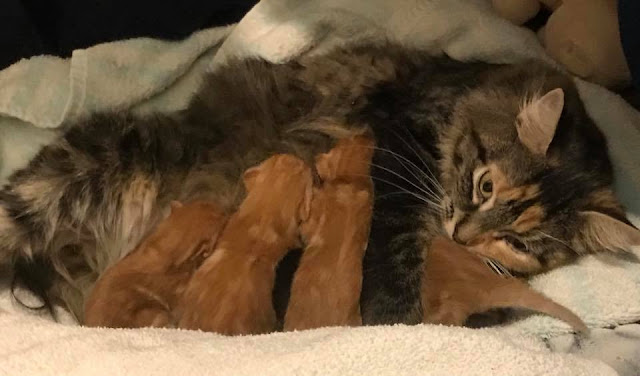 At first, her babies were feeding well. But the Monday after she arrived, one orange baby started fading. So we rushed off to the vet. Agnes had a bit of a temperature but seemed okay otherwise, so she got a shot of long-lasting antibiotic.

By Thursday, I had lost more orange babies and was back at the vet. Agnes' temperature was higher, so she had an x-ray (to check that nothing was going on in her uterus, like a retained kitten or placenta.) Apart from her temperature, she seemed reasonably well, so she was started on another antibiotic, and Peter the vet taught me how to tube-feed the three remaining babies, who had started losing weight the day I brought them in. I would also give them Clavamox via the tube.

Tube-feeding is now my super-power, lol.  I can do it when I am so tired I can barely put two words together And it is a tool I will now always have at my disposal if I ever have to help fading kittens again (which I probably will, since I intend to continue fostering!)

So from Thursday night to later Saturday, I tube-fed those babies every two to three hours, including through the night... 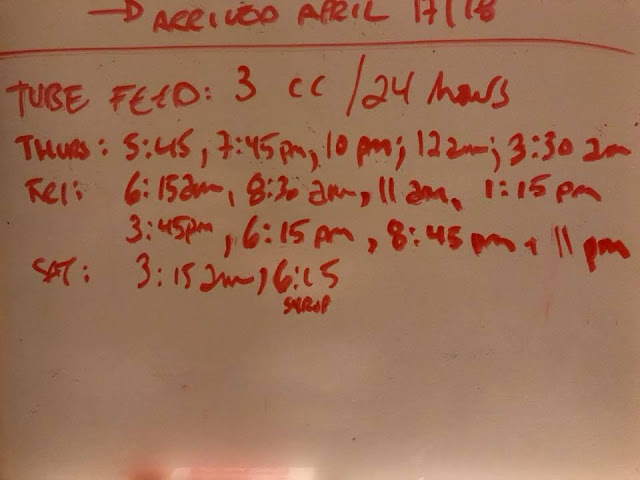 I learned that two nights of this kind of interrupted sleep is all I can handle. My concussion symptoms even started to recur! Althoguh I don't do well with sleep deprivation, I was determined to give it my best shot, so I hauled my ass out of bed, went to the granary, prepped the formula, and fed those babies. Sometimes around 3 am Saturday, I did not properly close the shaker bottle I was using to mix formula, and managed to spray Kitten Milk Replacer all over myself, including my hair.

It was not my best moment, but I got those babies fed and went back to bed, figuring my own cats would lick the milk out of my hair. Plus I had to get up again in three hours, so no time to waste cleaning up splattered milk.

The little black kitten and the little calico had been hanging on through several feedings.

Then the black one started to fade.

Still,  I kept rooting for this girl... 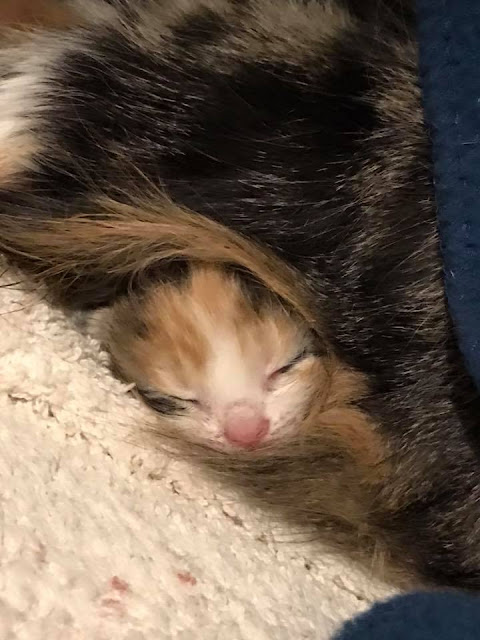 She was the only female in the litter, a beautiful little calico. 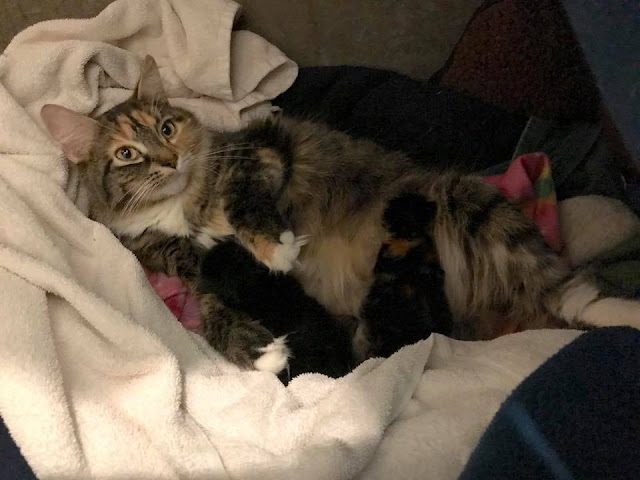 I believed she had it in her to overcome what was happening (likely issues with Agnes' milk quality and supply, due to her infection.)

I so wanted this little angel to make it... 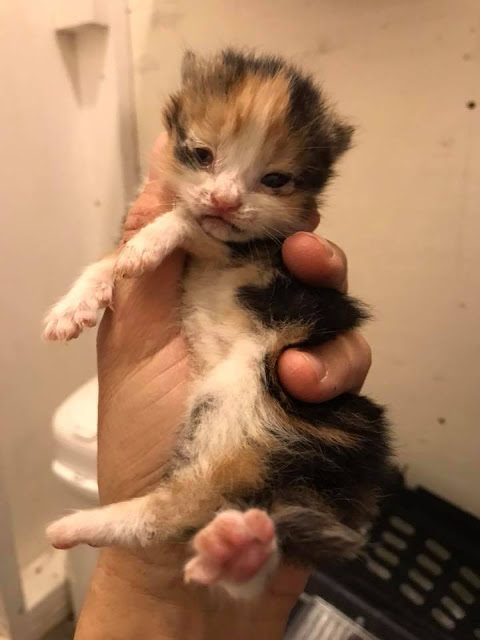 I can't even remember now exactly when she died, I was so exhausted after two nights of feedings. But when she did, I was just so sad. I really thought she'd survive. Well, I hoped she would.

I also took in Jewel and her five babies, born April 13... 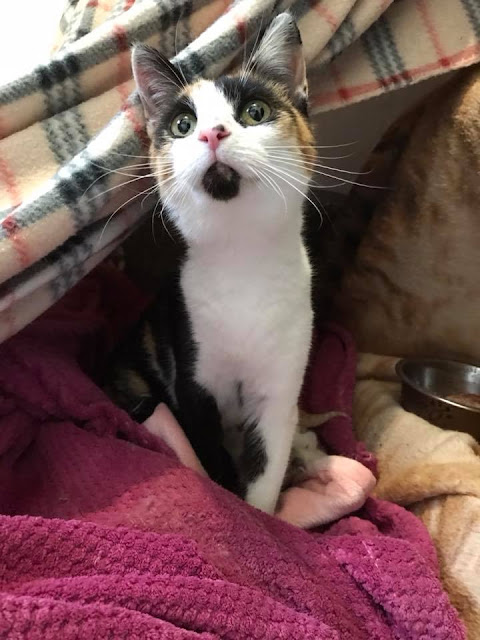 Jewel's littlest died right after I got her from Operation Spay + Neuter, then her grey boy died soon after that. I was (and am) so tired, I can't even remember the timeline. But in a short time these two foster cats lost eight kittens. 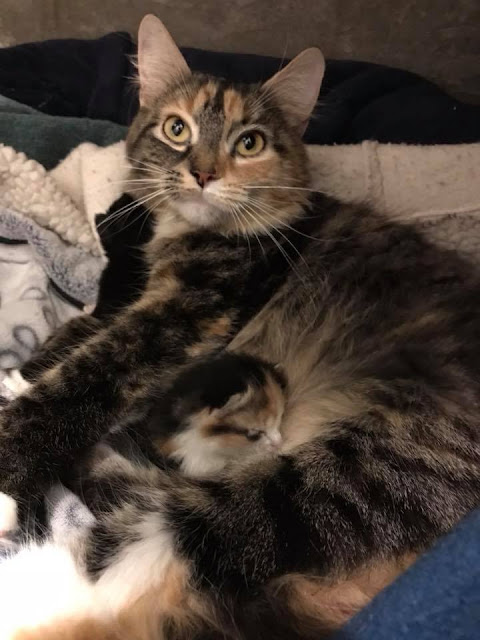 Agnes was a great mama but she is young, had no vet care before being take in by Operation Spay + Neuter. and of course, had an infection to boot.

Jewel is also young, but has managed to keep three of her babies going... 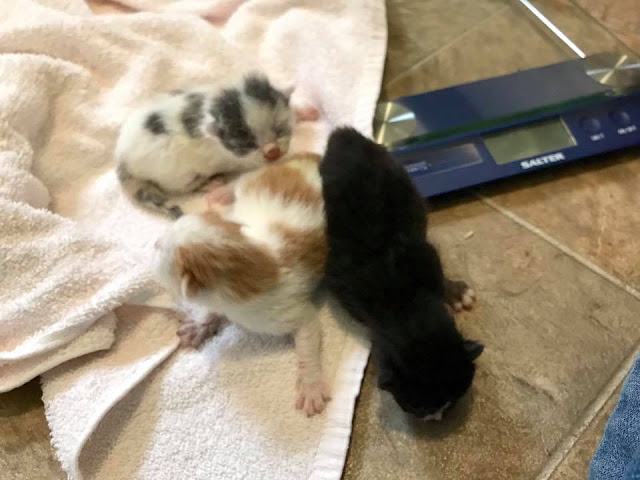 And then last Sunday, I took in these four premature kittens, and Jewel happily accepted them... 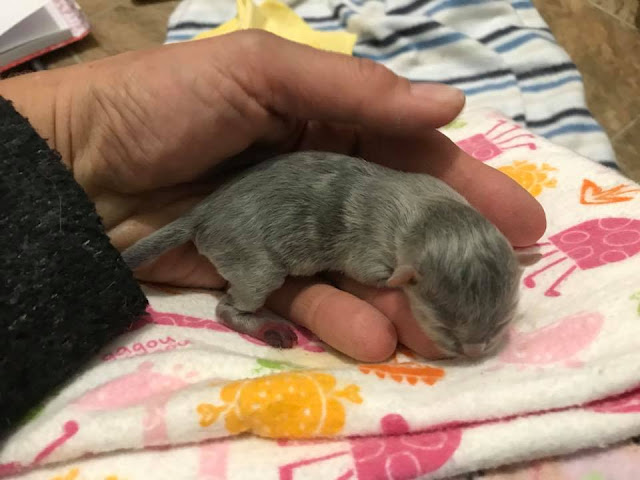 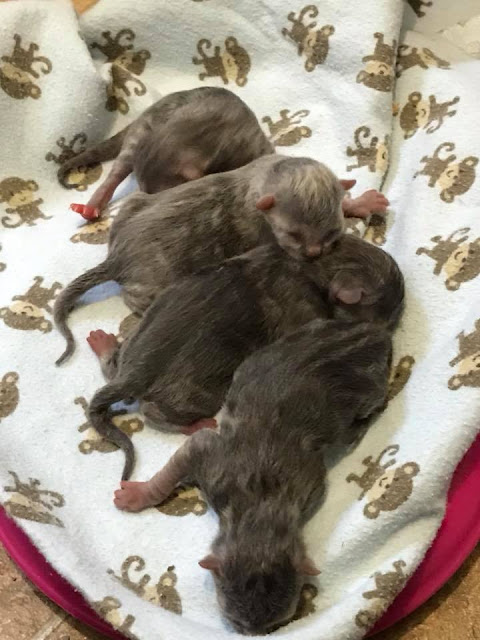 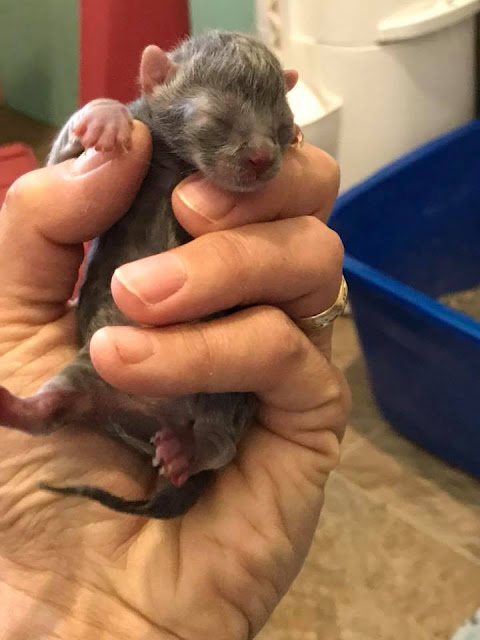 Their mama was EIGHT MONTHS old and had zero interest in them after giving birth. Their birth scene was a bloody mess; one kitten was still in her placental sac, and two of the six kittens died right away. We decided to give it our best shot, but by this morning, I'd lost three of the four, and tonight the last one is very weak. I think they were just too premature to survive, but it was worth a try. I have read that any kitten under 90 grams is considered premature; these four weighed from 72 - 85 grams. Still, they were nursing off Jewel so I had some hope.

In the past week, I've dealt with 11 kitten deaths, and probably will have another in the morning, which not only makes me sad, it makes me angry. I am so pissed off at all the irresponsible, uncaring people out there who refuse to spay/neuter their cats, and treat them as disposable items... people who do not care about the suffering of animals, nor the suffering of the people who end up caring for them, only to lose them. Not only does the world not need more kittens, it does not need more kittens born to poorly-fed, unvaccinated mothers who have never been to a vet's office because the owner couldn't be bothered to take them there.

I am well aware of the fragility of kittens, but even so, 11 is a lot, and every death made me sad. By the time I got to bed Saturday night, after the little calico died, I was exhausted, angry and crying. It just felt really raw. For someone who cares about animals as much as I do, it was a bit much to see these kittens fading away one by one. I am so sick and tired of irresponsible people who don't care about their cats and don't spay/neuter. We have WAY too many cats in our area, and all of these needless suffering is utterly preventable.

But then, I still have these three... 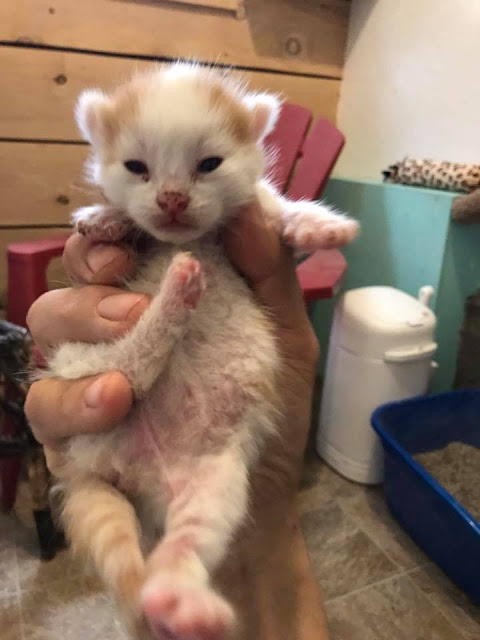 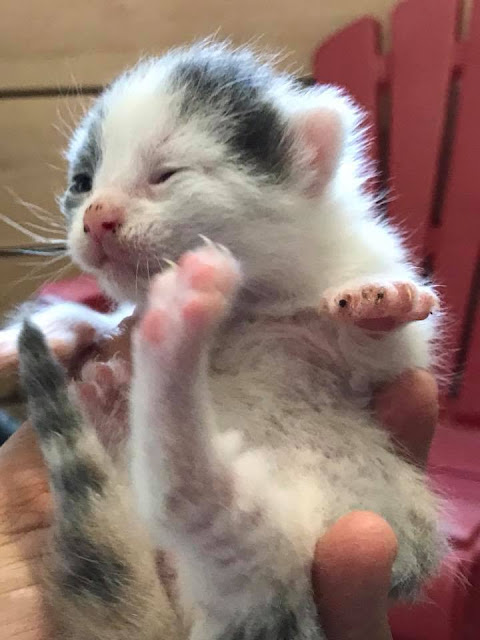 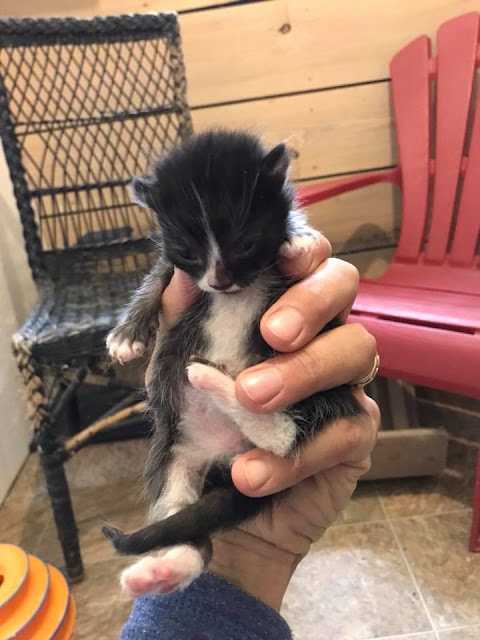 Please send good thoughts for these three. Like I said, they are doing well, but they are young yet. Their eyes have just opened and you can see they are getting ready to explore. I want them all the have long, happy lives with excellent families!!!

And another bright note, look at Grayson, aka Fake Grace... 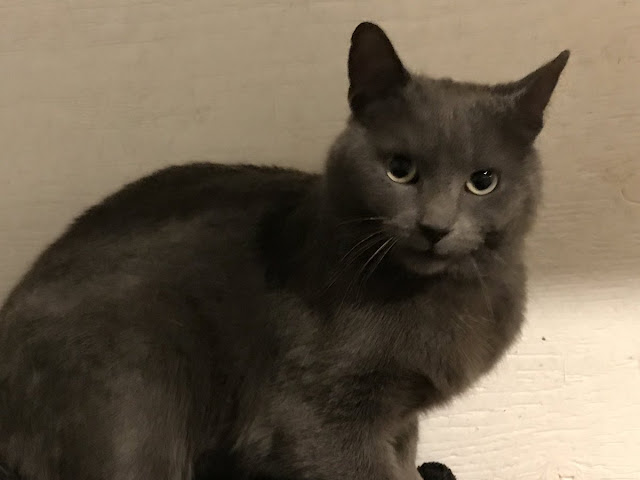 He has been here for something like five weeks, and in that time I've had him neutered, microchipped and vaccinated. And in all that time, he never made a sound: not a hiss, or a purr or a meow. He didn't scratch or bite or even struggle. He was almost catatonic, if you'll forgive the pun. But on Sunday, he cracked. 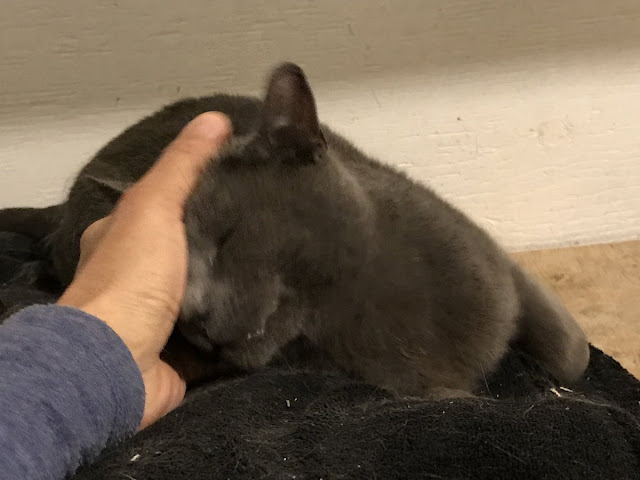 Grayson pushed his face into my hand as I scratched him. THen he rolled on his side. Then... he PURRED!!! 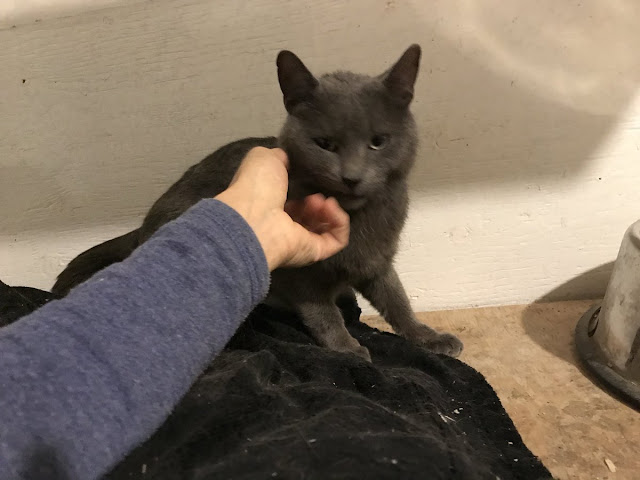 And today he gave me bologna tongue... 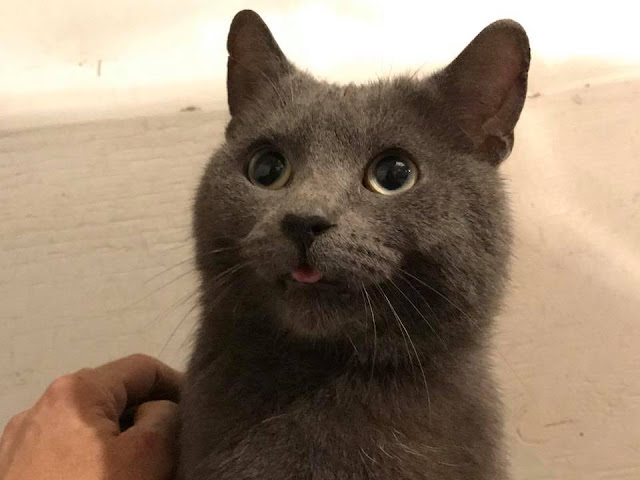 So for all the sadness this past week, there is some happiness too! Such is life.

PS: I got another poem published, this time at Love's Executive Order!
Posted by Knatolee at 10:08 pm 14 comments: