I love me a happy ending! 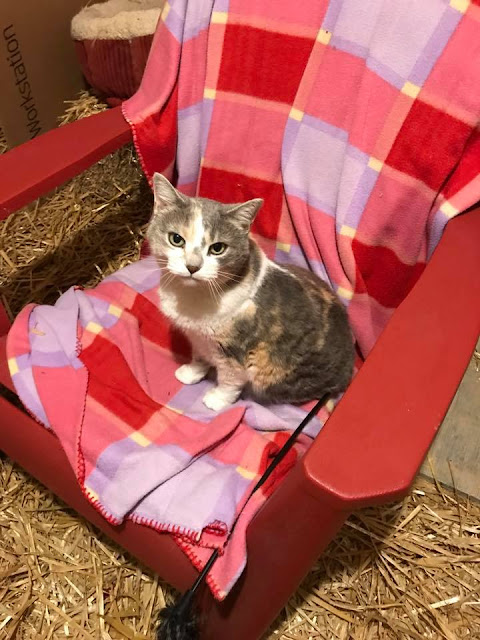 ...has now been adopted into the most amazing fur-ever home! 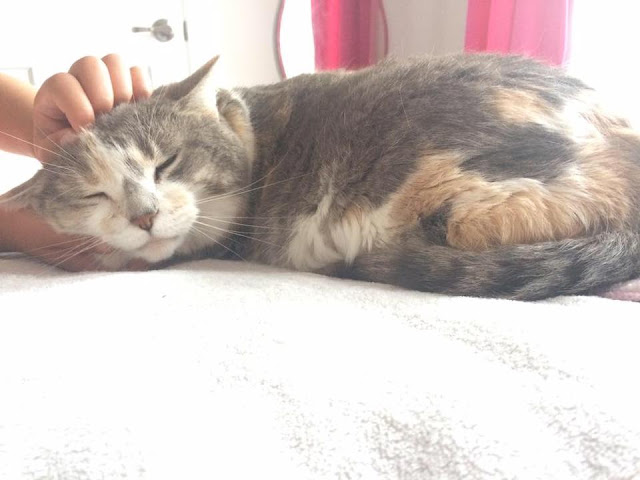 And she doesn't miss our barn one bit! 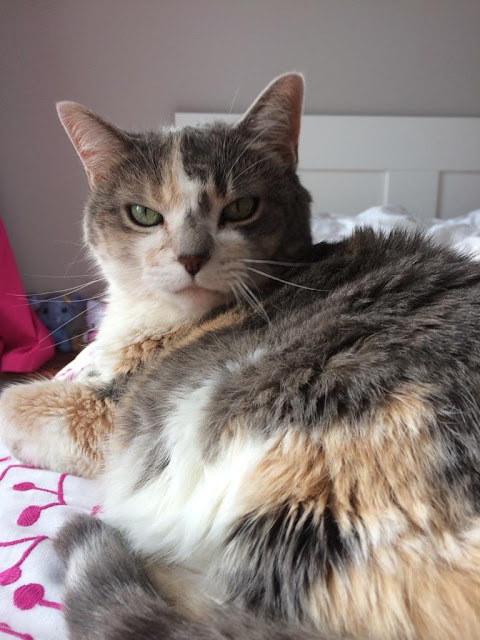 She is now living with a family of four that includes two lovely little girls who dote on their new kitty. And she has a Jampup and a Potcake (adopted from Eastern Ontario Potcake Rescue, like our three!) as siblings. :)

Cocotte's new family has fallen in love with her, and the feeling is mutual. I could not have asked for a better home for her. Cocotte sleeps with one of the little girls and has taken up residence on the pillow next to her head.

And in other amazing news.... 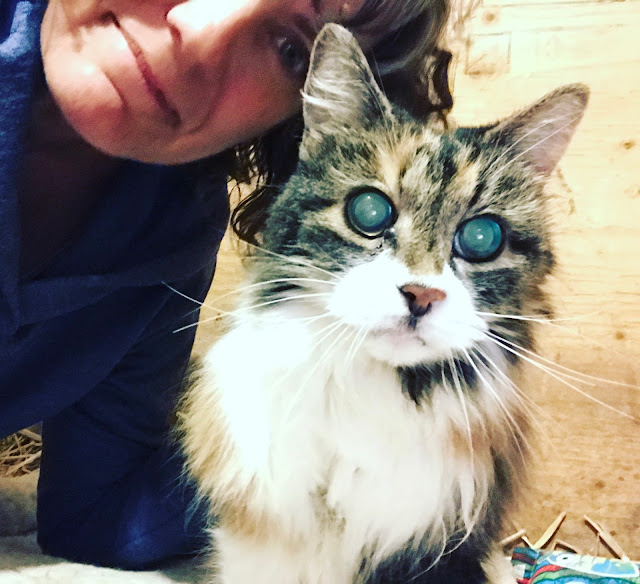 ...blind senior kitty Beatrice is going to her new home with my friends Sharron and David next Saturday! It takes someone special to adopt a cat most people would overlook. But this girl is so lucky. She is going to a home where she will be loved and cared for with the greatest attention until the end of her days (so long as she gets along with the two resident cats, LOL!) Sharron has been visiting Beatrice regularly, and Beatrice clearly adores her (well, I'm pretty sure it's mutual.) This poor cat (who has suffered through declawing, blindness, and mats so tight to her skin that most of her fur had to be shaved off) is going off to a wonderful life. I wish her many years of happiness in her new home. Our vet thinks she is quite healthy for an old gal. If anyone can squeeze a few more quality years out of a geriatric cat, it's Sharron.

Let me just say, adopting out animals was never my goal at Bee Meadow Farm. I feel like it is a huge responsibility to find the right home for an animal in my care, and nerve-wracking to boot. But so far I have adopted out six cats and touch wood, they have all gone to amazing homes. Which is just as well, because otherwise I would have 23 cats...  which I don't need, because I spend too much time worrying about animals as it is.

Speaking of cats, on Saturday Chloe jumped up on the bed next to Alex. His face tells you exactly what he thinks of that... 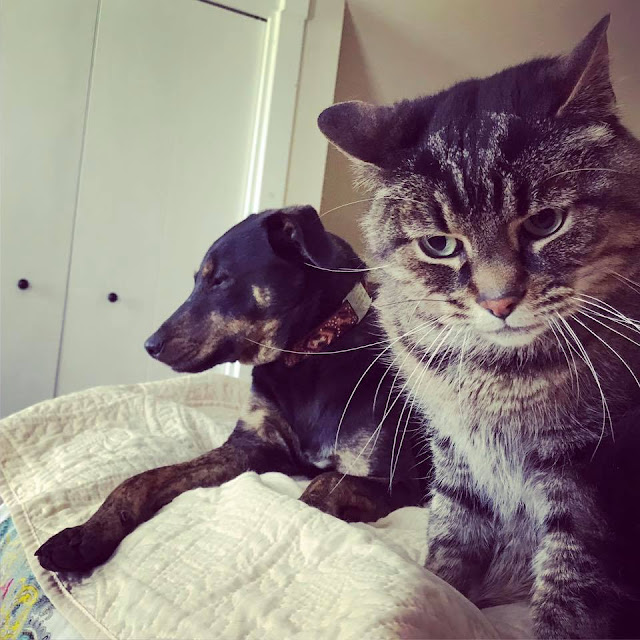 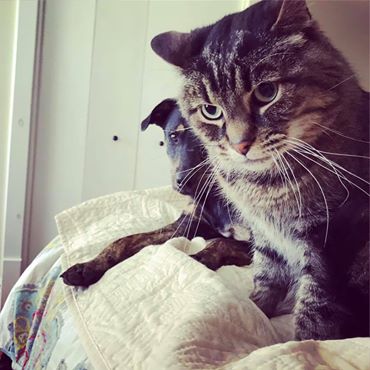 Alex always liked our dogs Sophie and Tristan, but he thinks the Jampups are a vision from hell. They aren't mean to him or anything, but they are a lot more, er, energetic that our other dogs were, and Alex has mostly been avoiding them. Usually when they jump on the bed, he jumps off. But this time he stayed, and eventually settled down next to Chloe, which was amazing. Chloe is the dog who most wants to play with the cats. Her idea of playing involves putting the cat's head (gently!) in her mouth. Not surprisingly, most of the cats don't appreciate this. Okay, well, NONE of the cats appreciate this, but strangely enough, Mimi tolerates it and seems to like Chloe. Anyway, I know Chloe is growing up because she was able to lie quietly next to Alex for quite some time without wrapping her jaws around his noggin. 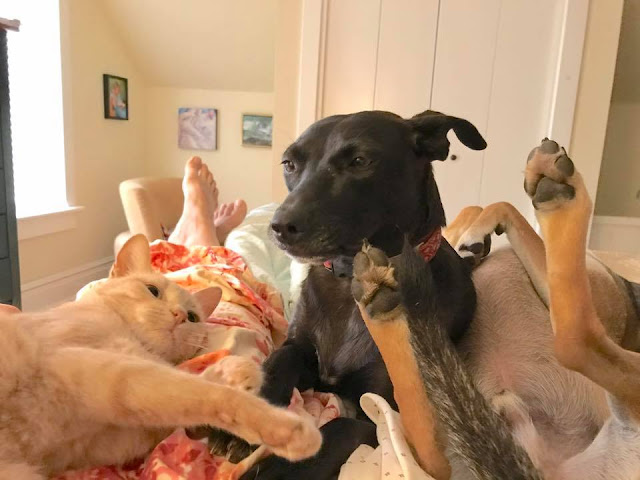 Gigi likes cats too. And Honey has figured out that Gigi  respects cats. All she has to do is give her a whack on the nose and Gigi stands down. We all had a nice cuddle in bed the other morning (those are Dodger's feet on the right.) 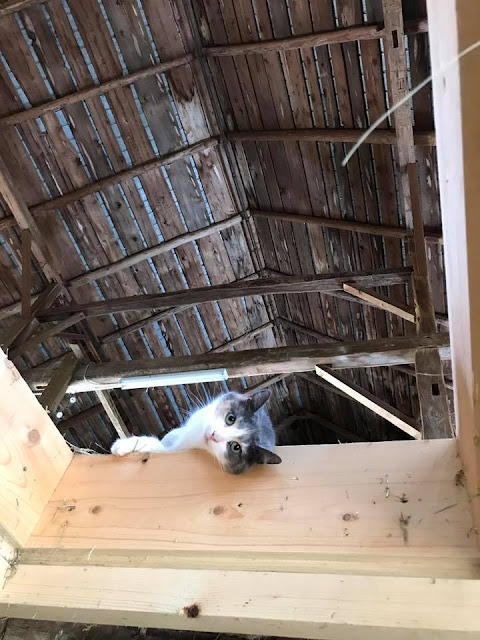 ...Missy likes to watch me from the hay chute when I am working in the box stall area.

And in a further thawing of dog-cat relations... 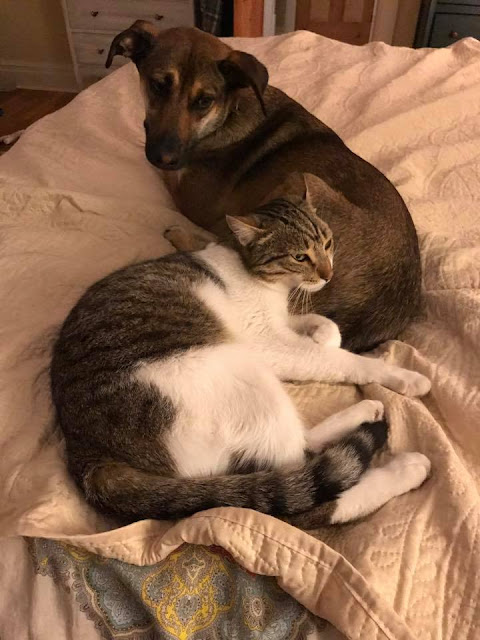 ...Archie surprised me last night when he umped up on the bed and curled up next to Dodger, using the dog's butt as a pillow. 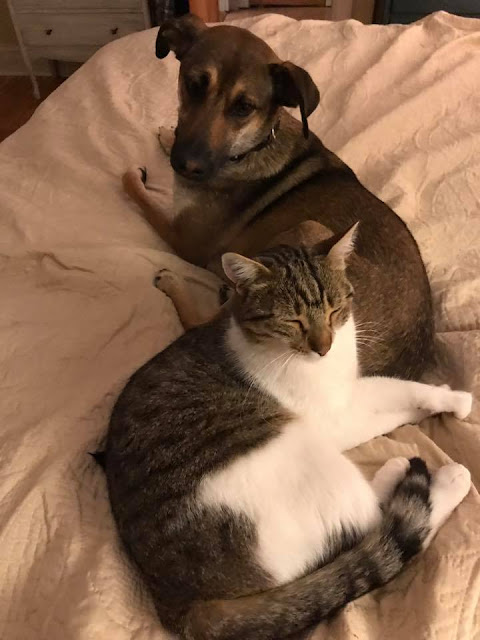 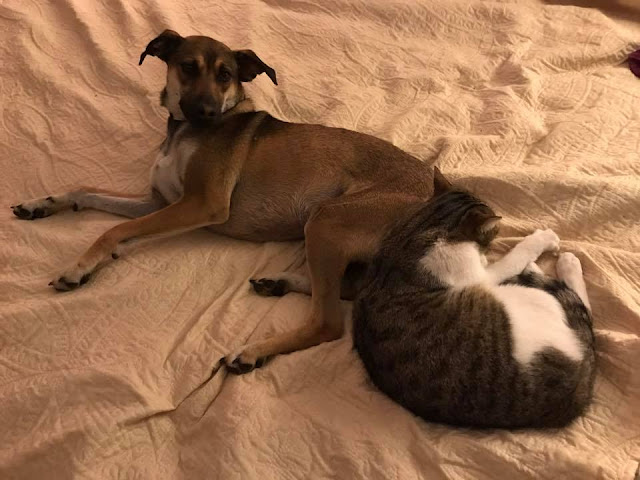 But eventually he relaxed. 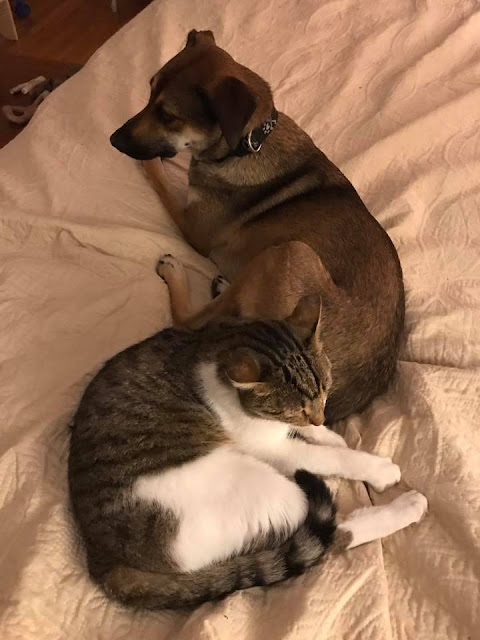 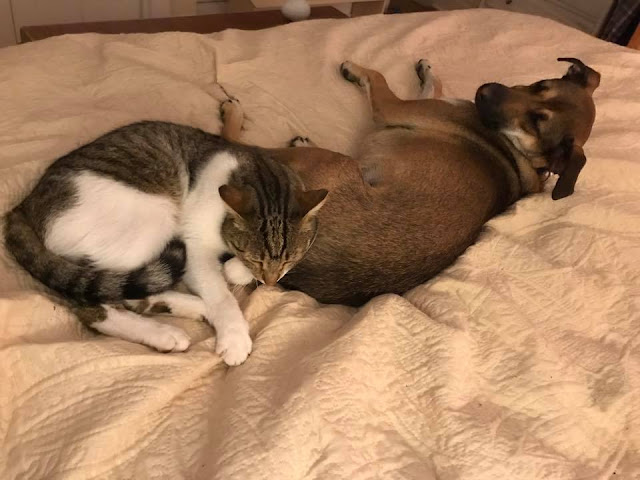 And the two of them fell asleep together. I was amazed, because Archie was not impressed by the pups when they arrived. But as the months have gone by and the dogs have calmed down a bit (emphasis on "a bit"), the cats seem to have realized that they can rule the dogs quite easily, and that the dogs, while rambunctious, mean them no harm. That said, Chloe needs to learn that she can't play with cats like they are squeaky toys! But the cats do a good job of setting her straight on that themselves.

Hope you all have a great week!

We are fostering two cats for a rescue in Hawkesbury that is full to the gills. 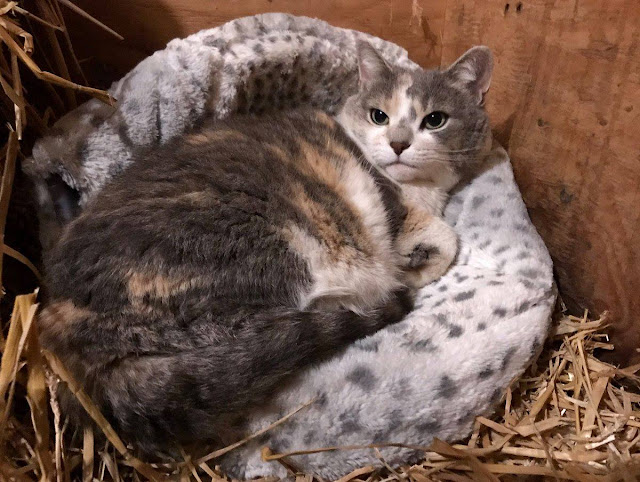 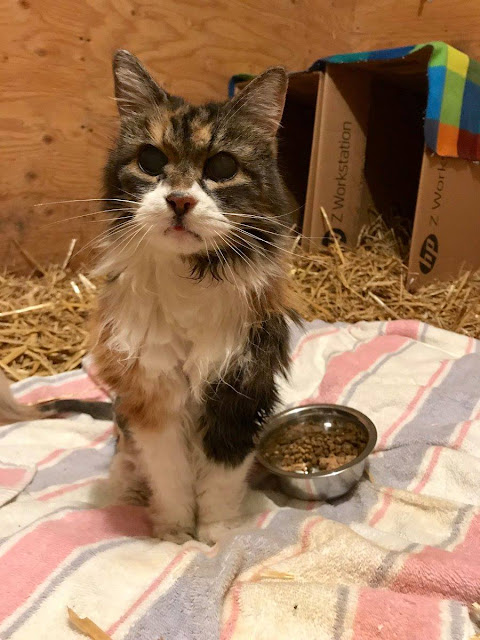 Sigh. I am pretty sad about these two. The other day, the rescue was notified that these cats would be euthanized or tossed in the street that night if they weren't taken away immediately.

They belonged to a pair of elderly sisters who hadn't told the landlord about the cats. When he found out, he said they had to go. Apparently the options were "toss in street" or "euthanize." The whole story is a little sketchy.

Operation Spay & Neuter in Hawkesbury asked me if I would foster them (I had previously offered up an empty "room" in our downstairs barn.) So they are with us for now. Gordon took them to our vet tonight for vaccines and exams.

Cocotte is 7 - 8 years old, spayed and in good health. She could stand to lose a couple of pounds! 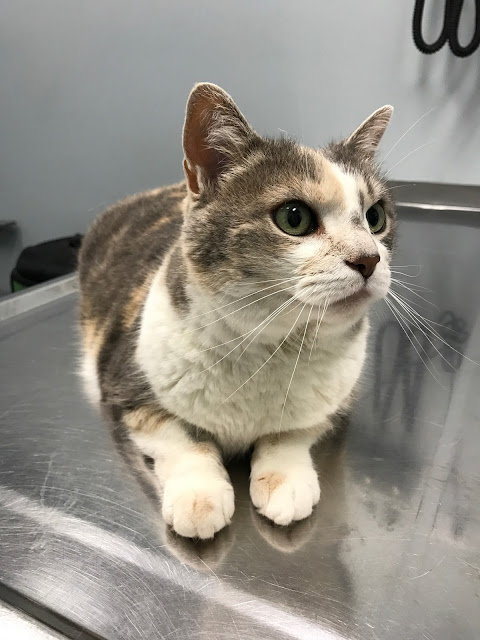 I really like her. She's got backbone and personality! She loves to be petted and brushed. She has a playful demeanour, but is calm and quiet. She'll tolerate some lap time but she would rather sit next to you. She's a pretty dilute calico. She was a bit despondent the first few days she was here, but she is coming out of her shell now. She was a very good girl at the vet's this evening.

But Beatrice, poor Beatrice... She is a long-haired calico. When the ladies from OSN picked her up, she was so matted it was like she has a turtle shell on. It was just a hard mass all around her body, and she could barely move. On top of that, she is almost completely blind. The ladies who had her said she has "shown up" two months prior and apparently did not know or did not care that she was blind and badly matted. The OSN ladies spent two hours shaving off Beatrice's mats... she is moving around well now! I can only imagine how much better she feels.

Our vets says she is 15 - 16 years old. She so reminds me of our Julius when he was in renal failure (the blindness, funny gait, etc) It would not surprise me if she turns out to have kidney problems. The vet is running some blood tests on her.

Clearly Beatrice may not be the most highly adoptable cat but the people who have met her this week have really fallen for her. She is no shrinking violet! She gets around well without her sight, eats like a horse, and likes fresh catnip and catnip toys. She enjoys being petted and gently brushed. My friend Sharron picked her up and cuddled her to her chest for some time and Beatrice was very happy with that. I've been enlisting people to come to spend time interacting with the cats. It is so good for cats and humans alike!

Poor Beatrice has  been declawed on the front. Both cats are spayed, and as of this evening, vaccinated.

So here I am, hoping against hope that someone will adopt these girls. They are not at all bonded so they don't have to go together! Cocotte hisses at Beatrice any time she comes near here, and Beatrice could not give a rat's ass about Cocotte... trust me on this! :)

It all makes me (more) despondent about humanity and how awful people can be to animals. I mean, who tossed out Beatrice two months ago before she came to the elderly sisters? ANd Cocotte is just a sweetheart. And you know these two are a drop in the buckets. There is a ridiculous number of unwanted cats (not to mention other animals!)

Still, I am trying to focus on the good people, like the ones who have come this week to cuddle and play with these two. My friend Christine brought her son Finn and they gave gentle attention to both girls (and brought toys and treats!) My friend Tina, Sharron and Kathleen have all come to spend time with these two cats so they aren't so lonely in the barn room. There are lots of good people in the world.

So I guess I'm hoping these two both find the loving homes they deserve. At 17, we really have all the cats we can manage/afford, and I would love to see these two in their dream homes. Sigh...
Posted by Knatolee at 8:43 pm 11 comments: