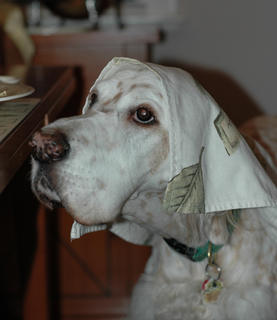 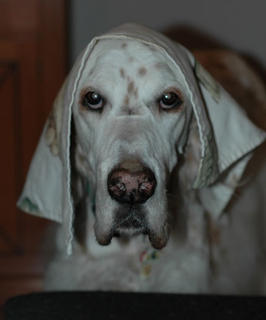 We had company over for dinner last night. Tara, our aged English Setter, decided to try her luck begging from our friend Greg. Greg's response was to drape a napkin ever-so-delicately over Tara's head. She seemed to like her new headgear. 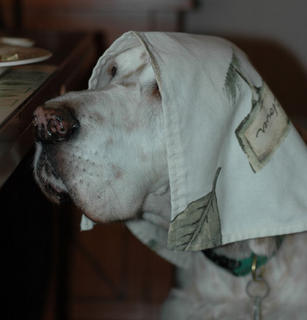 “I feel pretty,
oh so pretty!”


Going incognito in the quest for table scraps.
Posted by Knatolee at 1:54 pm 2 comments:

My husband travels to various remote places in BC as part of his job as a treaty negotiator for the federal government. He has made quite a few trips to the Wuikinuxv village at River’s Inlet. On his last trip, there were lots of grizzly bears around, not yet fattened up on salmon.

My husband was spending way too much time trying to view bears. Someone suggested Gordon (the Bearded One) staple pork chops to himself and go out for a walk in the evening. My husband knows bears, especially grizzlies, can be dangerous, but until last week when I made him read True stories of bear attacks : who survived and why (by Mike Lapinski), he was a little too eager to seek them out. Now that he’s read about people having their faces ripped off by grizzly claws, (“Hey look, here’s his ear! Hey look, there’s his nose! What’s under that log? Is that a... is that a BUTT CHEEK?”) he's going to be more cautious around these beautiful beasts.

Here's a skinny grizzly that Beardo and his fellow city-slicker negotiators spotted in the village when they were last up there: 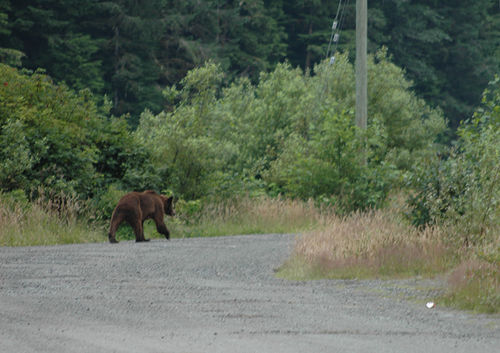 One time when The Bearded One and the other city slickers were in River’s Inlet, they went for a little walk down some road. Halfway through the walk, a logger showed up in his truck to rescue them. A grizzly bear was on the road between the city-slickers and the village. Treaty negotiators make the best bear-toys. And they're all fattened up on Timbits! You'd think the city-slickers might think about why the Wuikinuxv DRIVE everywhere in bear season.

Here is spectacular River’s Inlet, where the bears (and the Wuikinuxv) live: 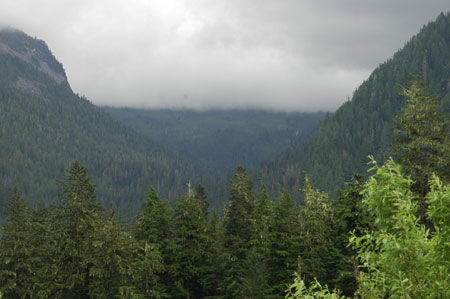 And here’s a beautiful totem pole in the village: 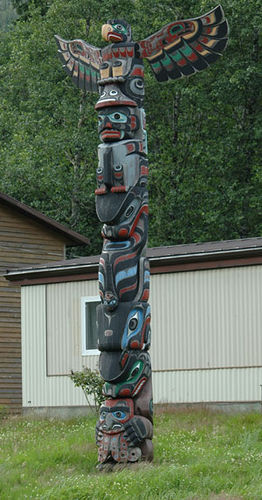 And here are some of the village doggies, enjoying a nap in a truck without brakes. Apparently brakeless vehicles aren't entirely rare in these remote villages. They are just driven slowly enough so as to glide to a stop. And yes, it does appear to be parked in the fire lane! 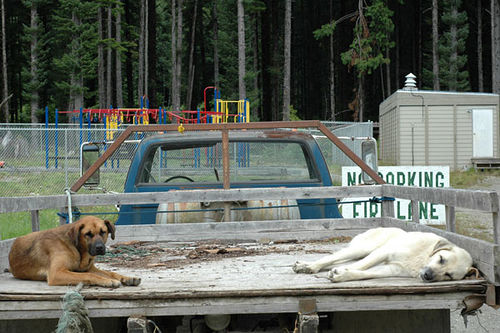 “Finally, some time off from trying to protect those dorky city-slickers from grizzlies!”

And when my husband isn’t trying to become a succulent bear-meal, he’s flying through mountainous areas in these weenie little planes, where he sometimes gets to sit in the co-pilot’s seat... BECAUSE THERE IS NO CO-PILOT! And no, I don’t know what happens if the pilot comes down with a brain aneurysm mid-flight. I suppose SOMEONE learns to fly very quickly, or else there’s another smouldering wreck hidden in the mountains of British Columbia. I hope those pilots are taking their blood-thinners. 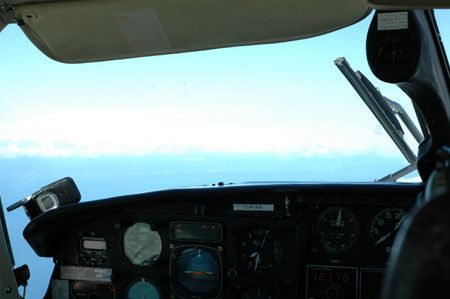 Thank God the Bearded One has life insurance.
Posted by Knatolee at 11:56 am 1 comment: 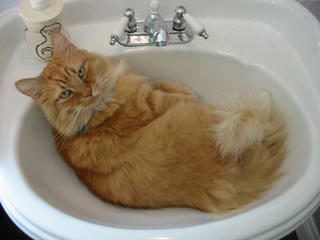 “Why yes, in fact I DO own this sink!”
When we moved from Nova Scotia at the end of 2003, I wept many tears! I like to keep a connection to "the homeland" (even though I was born and bred in Toronto) and so, in addition to staying in touch with my Nova Scotian friends, every year I do the design and production work for the Bide Awhile Animal Shelter photo contest calendar. Bide Awhile is a great little shelter, and they are currently building up a fund to build a new, bigger and better shelter. Visit their website:

And hey, if you're flush, make a donation! This no-kill shelter is well-managed and does great work. I do the calendar for free every year because they mean that much to me!

And check out the photo challenge winners on the site. There are some dang cute pets featured there! That fellow pictured above is our very own Julius, the only one of our pets born in NS. He just showed up at our back door one night and never left.
Posted by Knatolee at 7:58 pm No comments: 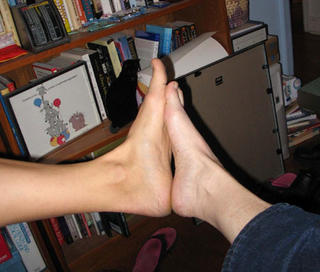 Speaking of my nameless friend (Phyllis) here are our feet. She thinks my size ten feet are GIGANTIC! I think hers are cute, but they would look stoopid on me because I am 5' 7" and she is only 3' 2". But her feet are waaaay cuter than mine.

I think we both needed pedicures.
Posted by Knatolee at 10:35 am 3 comments: 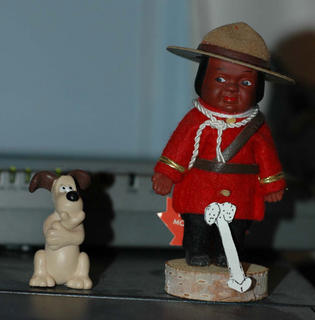 And why, might you ask, does my nameless friend (Phyllis Phyllis Phyllis) feature so prominently on this blog? Well, probably because none of my other friends would tolerate me exposing their private lives in this manner. Of course, you get to see my husband here, but he too is used to me abusing him in such a fashion!
Posted by Knatolee at 10:23 am 4 comments: 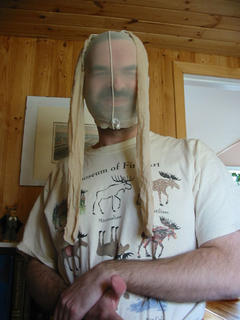 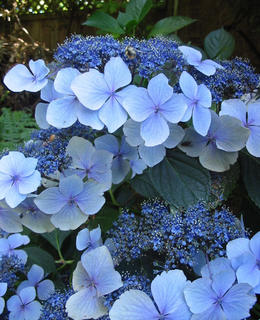 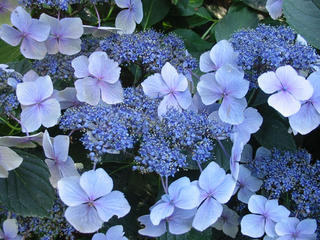 Isn't this hydrangea PRETTY? It's growing at the back of our garden.
Note the bee enjoying its nectar/pollen in the top photo.
Posted by Knatolee at 11:43 am 1 comment:

Okay. For the year and a half we have been living here, we have endured the hell of eleven houses being built next to us. We knew this was going on when we moved in, but figured we'd survive. I did not realize the construction would be going on for so long. These houses are SPECIAL. The people who buy them are SPECIAL. We live in a heritage house in a sweet old village founded in 1905. Somebody managed to get a hunk of land out of the agricultural land reserve, and got approval to stuff (and I do mean STUFF; these lots are teeny!) eleven houses on the piece of land next to us.

Granted, the houses are quite nice-looking. They will soon all have white picket fences. However, too many 2200 - 2400 SF homes are crammed in here. And people with children are buying them. People with children who like to play outside. Children who need a big garden to play in. Not a postage-stamp size lot.

A couple of the lots are bigger than others, but mainly they are really really small. Three houses run the length of our entire backyard (we have 1/4 acre.)

Now, trampolines are HIGHLY popular in Anusford. One of the new homes in this subdivision has one shoehorned into its backyard, but it is so big it actually extends out into the alley behind the house, impeding traffic. When I saw that one, I said (before the houses next to us were finished), "You watch, honey, every one of those three houses next to us is going to have a trampoline in its backyard, with kids jumping up well above the height of our fence." "Pshaw!" said my honey, or something to that effect.

Now the first of those three homes is occupied. Lovely people! But what did they stick in their back yard? A TRAMPOLINE! We endured a couple of weeks of the kids bouncing and screeching outside our bedroom window, occasionally until 11:00 pm. But then this week, the trampoline miraculously moved to their side yard (which is a gazillion times the size of their back yard.) Now it's next to our parking pad, hallelujah, and I hope it stays there. Well, really, I hope it disappears in a mysterious act of arson, but... 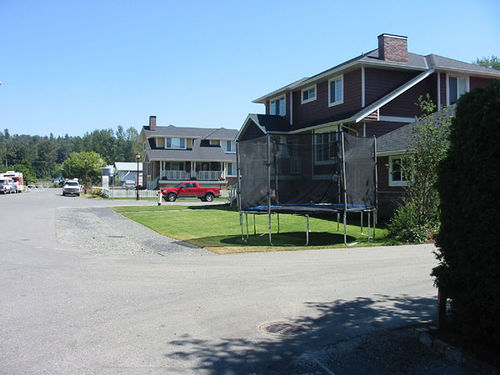 Here's my disclaimer: I do not hate kids. I really like kids! We volunteer as a Big Couple for Big Brothers and Sisters. I don't begrudge them their trampoline. BUT IT'S UUUUUGLY! UGLY! UGLY! And it's NOISY NOISY NOISY! Apparently, when kids get on trampolines, they scream for the sake of screaming. I mean long, loud, unintelligble screams, in fact, more like screaming contests!

It's okay though. The trampoline was the straw that broke my honey's back and made him realize that yes, we now live in suburbia (something we swore never to do). He is determined to move next year, to our dream acreage in the country. For that, I have the trampoline to thank.

Less attractive than the trampoline is the Porta-potty that has been sitting jauntily next to our fence (down the right) lo these many months. Some days I get a nice whiff of construction-worker pee-pee, aged to fine perfection. They do pump it regularly, but it's not always soon enough.

The cute little white roof can be seen from our yard, a vision at the top of our fence. 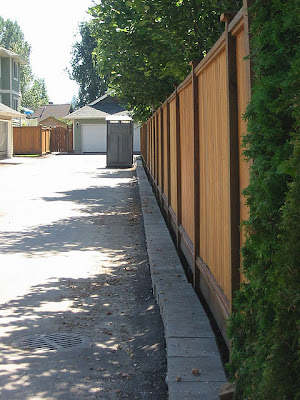 There are many construction wonders around here. Just this morning, a dump truck unhitched its pup-trailer right in front of my house and scared the crap out of me before I'd had my second cup of tea.

So there you go. I live in a quaint heritage village surrounded by farms surrounded by unbelievably ugly suburbia (clear-cut those mountains!) We get many interesting farm smells on a regular basis (mostly chicken manure), blueberry cannons in July and August (to scare off the birds who dare eat the blueberry crop), Westjet planes preparing for landing over our roof a few times a week (that didn't start up until THIS year), helicopters from the helicopter school, rich wanker teenage boys in Honda Civics who drag race up Wright Street in the middle of the night (village speed bump be damned!), endless construction noise (I've decided those Bobcats with the reverse beepers are the worst) and did I mention the trampolines? For this I left oceanfront in Nova Scotia. I am not bitter, I am not bitter. No, not meeeeeeeee!
Posted by Knatolee at 5:22 pm 1 comment: