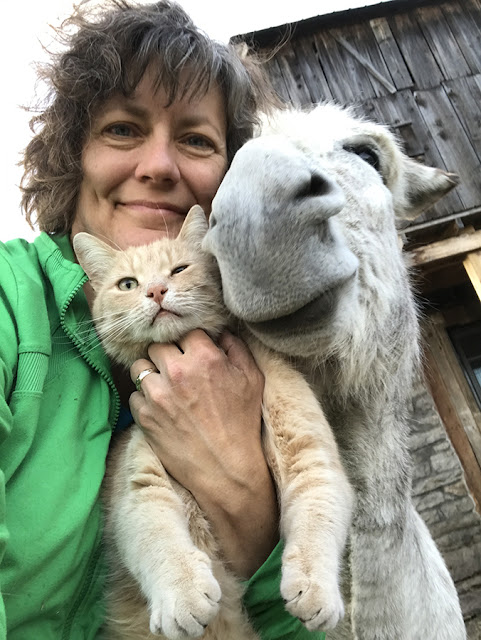 ...these two CRACK ME UP! Emerson and Saul just love each other and they are both so snuggly! What a pair.

And yes, my Quarterhorse Roo has a birthday today! 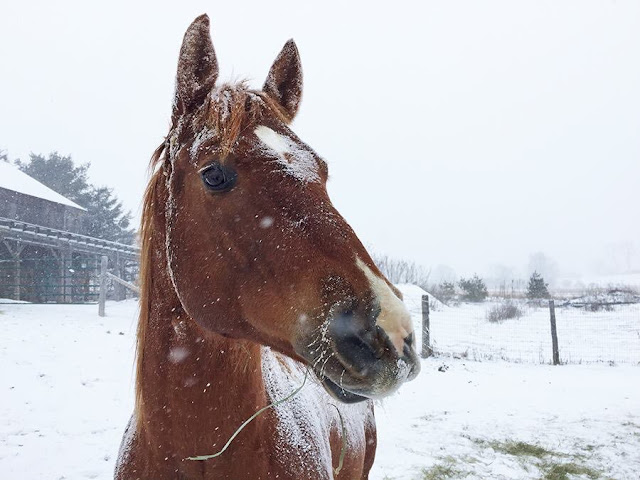 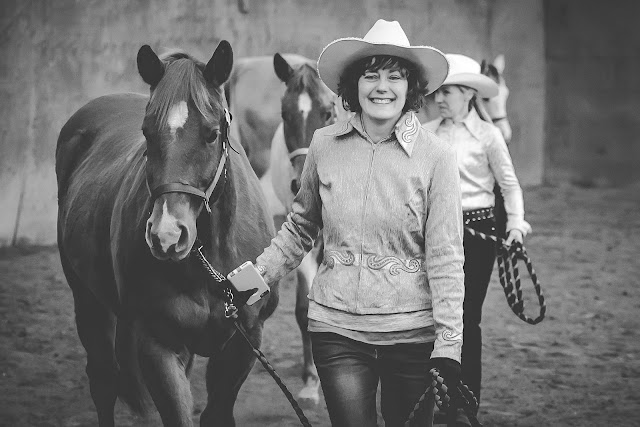 We've had so much fun together the past two years! 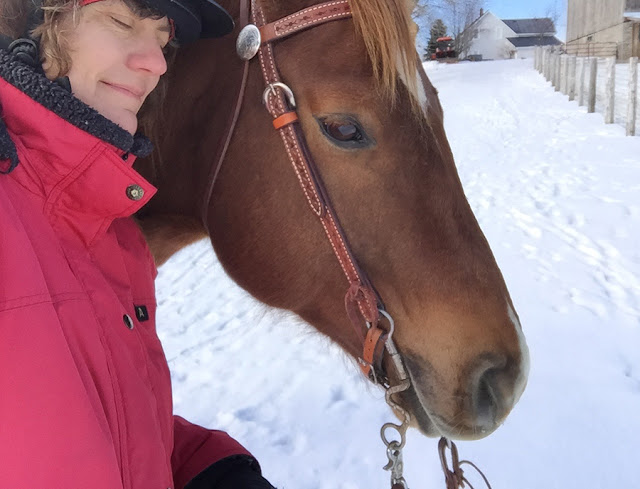 Here we are on MY birthday in January, which was the last time I rode before my concussion. But as of last Sunday... 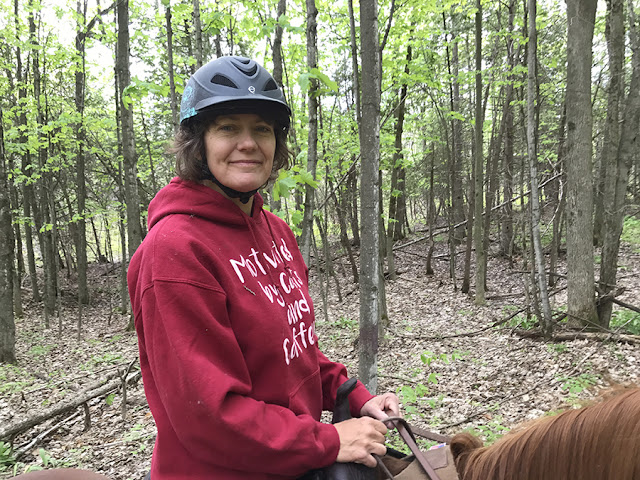 ...I am back in the saddle again! Woo hoo! It felt so great to go on a trail ride. We didn't go any faster than a walk but it was fantastic. (And my shirt says "Motivated by Cats and Caffeine" ... I got it from one of my fav Etsy shops, RC Tees!) 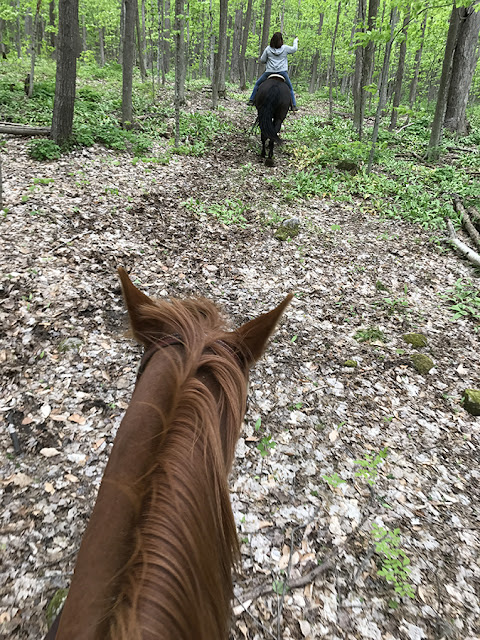 Gordon and I went out with our friends Debbie and Luc. The woods are greening up nicely and it was a beautiful ride. We trailered Roo and Sandy over to Luc and Debbie's place, and left from there. They have beautiful trails right by their property. 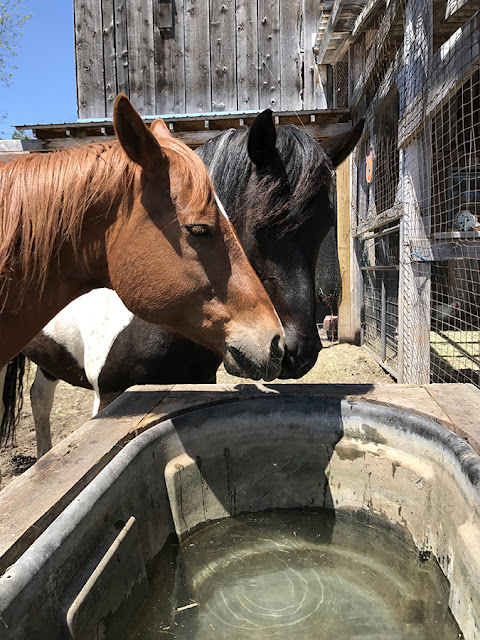 Here's Roo with his girlfriend Ella, waiting for the stock tank to fill. I love my big goofy horses. He'll get a treat later today.

The cats are all hanging in there. 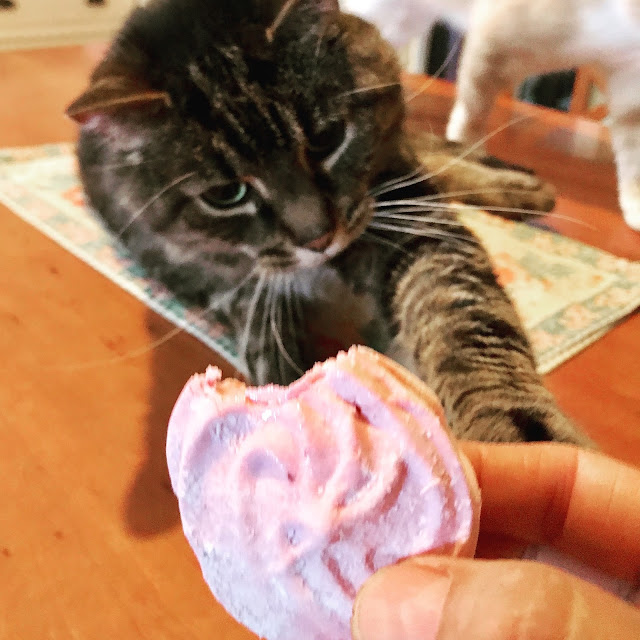 Last weekend some friends of Russian heritage visited from Ottawa and brought these delicious homemade Russian marshmallows, flavoured with apples and cranberries. Alex wanted some but I would not share!

Missy gave us a bit of scare the other week... 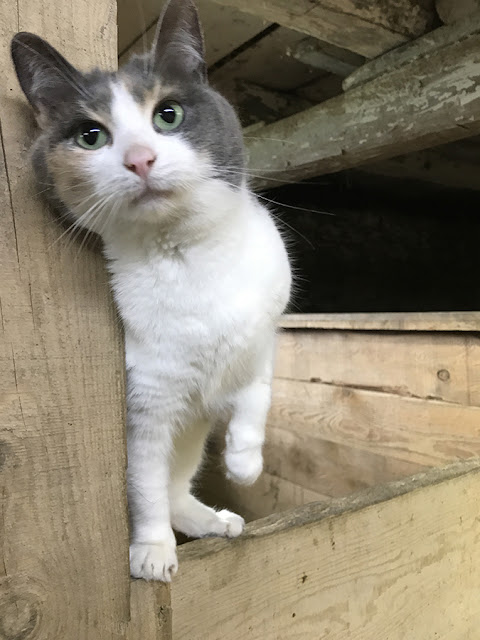 She disappeared in the barn somewhere for about 24 hours. We finally found here hiding behind the hay bales. She had somehow injured her foot and wasn't putting weight on it, so off to the vet she went. He couldn't find anything obviously wrong.  It might have been a tiny ligament tear. She came in the house for a few days to get medication and rest (and hated every minute of her time in Gordon's office!) but she healed quickly and is back to her normal, chatty self. Phew!

And here's the reason(s) my front porch is a muddy mess littered with chewed-up cardboard... 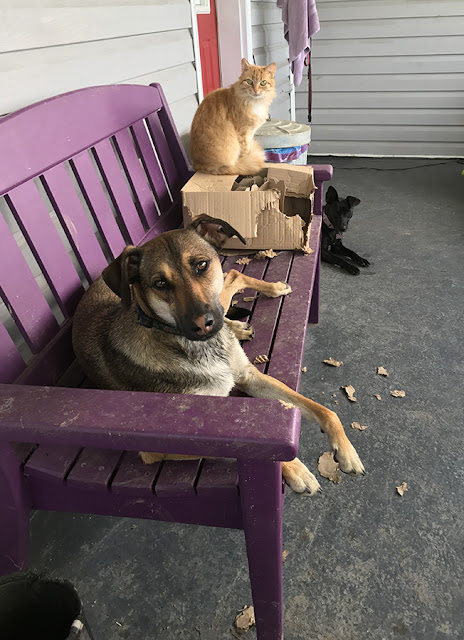 Dodger, Mootie and Gigi look very proud of themselves.

On another note, I wrote a piece for the Ontario Beekeepers' Association's journal, for their "Meet a Beekeeper" column. It was just published, with my photos! 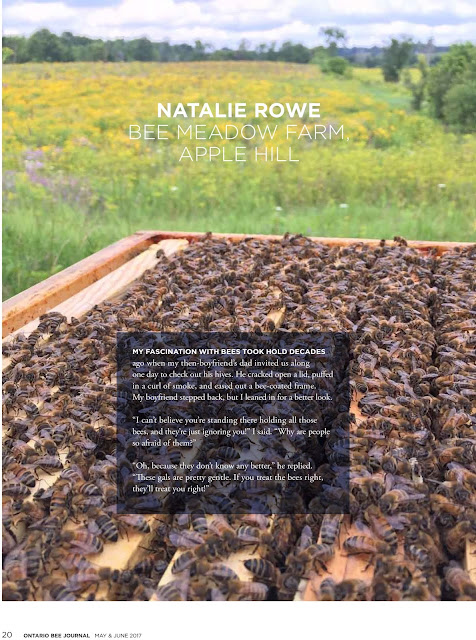 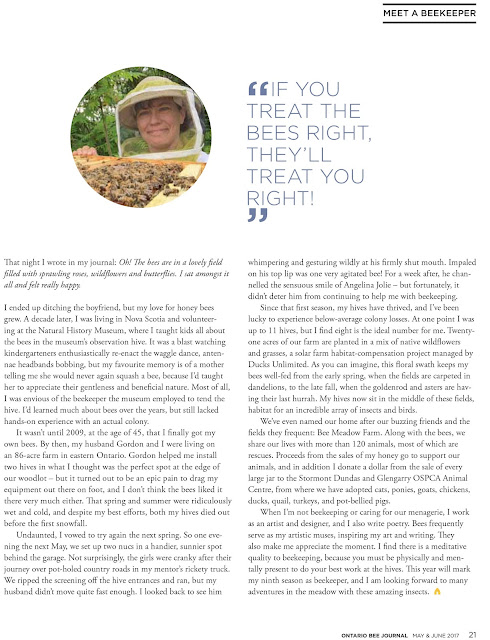 So nice to see my writing in print!

And if you're in our area, we are having an Open House and fundraiser on June 17th: 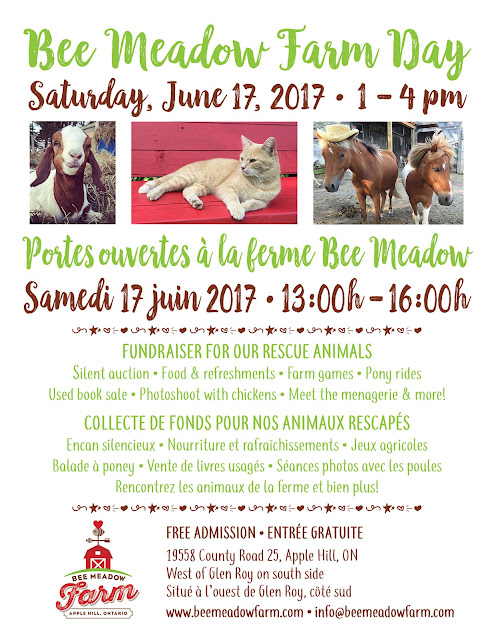 I am off to give my horses some carrots! Have a great weekend.

It's May, but it mostly hasn't felt like May because it has been cold, wet and damp. It was our anniversary the other day and it was actually snowing for the first time that I can remember!! 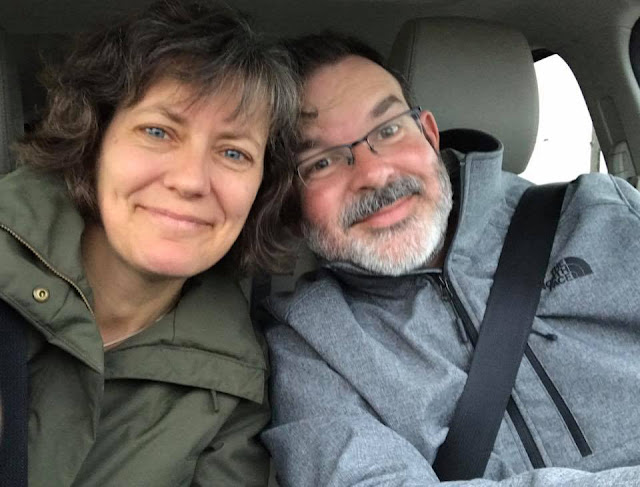 We made it to #24!  We went out for a nice supper at Sheep's Head Bistro the day before, because Gordon was out of town on business the actual day of our anniversary... which wasn't such a great day, because besides dealing with snow, and cat pee in my front hall, I went down to the goat house in the afternoon to find Ninja lying on side, dead. 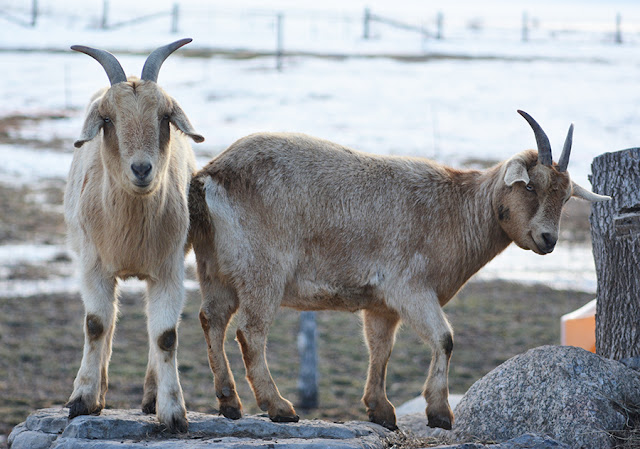 Here is Ninja after we adopted him in March, with his sister Cindy. They are about three years old, which is young for goats.

This is the first time I have lost a goat, and I was so shocked and sad. We can't figure out what happened... they were a bit thin when they arrived here but the goats are dewormed and Ninja wasn't showing signs of a severe infestation. He has no visible injuries; it looked like he just keeled over very suddenly. The goats get along well so I have no reason to think Kevin rammed him to death, but who knows, maybe he took a hit that did internal damage? I just couldn't find any signs of anything having gone awry.

I talked to a goatkeeper friend of mine who said she has lost a couple of goats that way to a twisted bowel... I don't know. We didn't send him for an autopsy, so I will never know for sure, but it is very upsetting.

Last Thursday, he and Cindy were out and about playing with Buttercup... 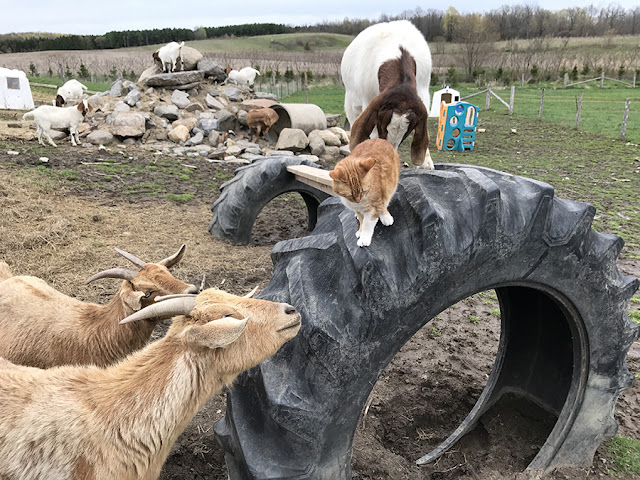 Monday morning, Ninja was lively and eating. Monday afternoon, he was gone. It really sucks... and not only will we miss him, but so will his sister Cindy. She seems to be coping okay. Vet is coming next week to do everyone's annual vaccines.

RIP dear Ninja. You were a lovely boy and I am so sorry I couldn't have given you a longer life here. :(

On a (literally) brighter note, the sun made an appearance yesterday and everyone got to go out on pasture for a bit... 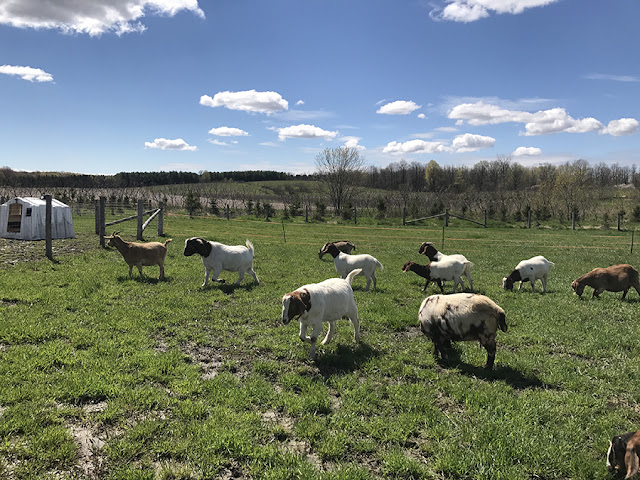 Everybody here was happy to see the sun, including me. The grey weather has really been getting me down.

But Millicent is thrilled with life! 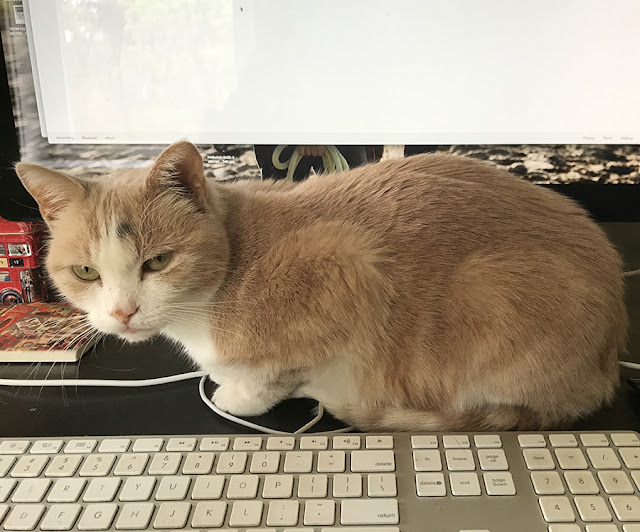 She has now come out of Gordon's office for good and is fearlessly roaming the house. 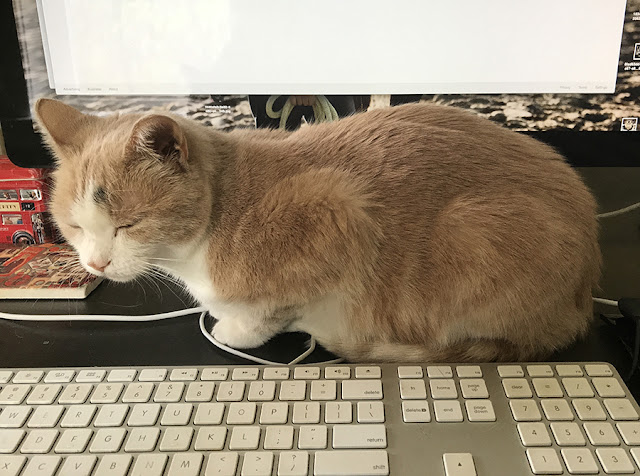 In fact, she has become a bit of a pain in the butt when I am trying to work, because she always wants attention and loves to roll on my keyboard and block my computer screen! 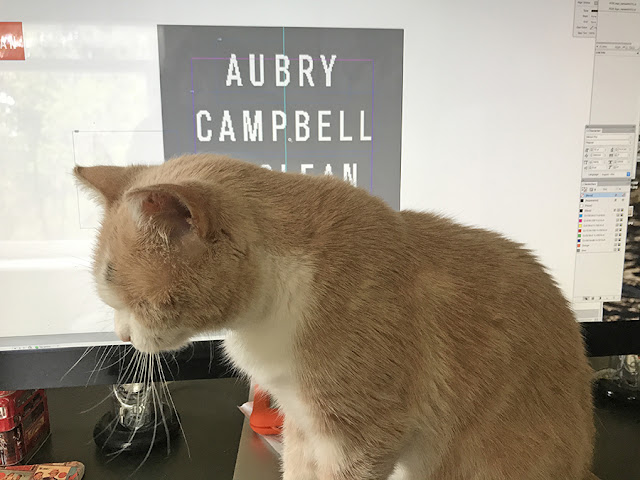 Or doze off in front of it. 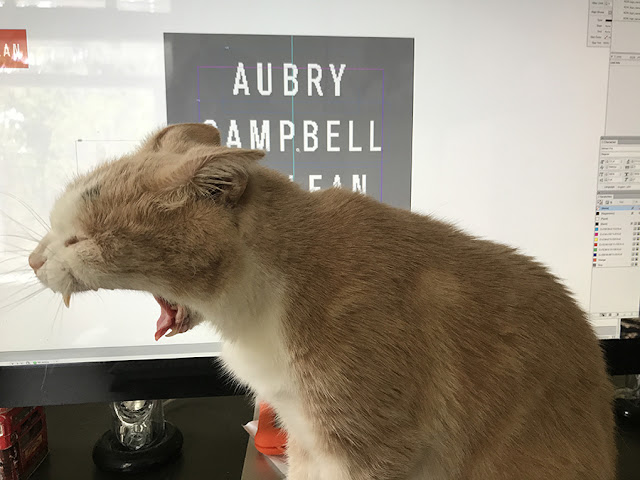 That's her opinion of the graphic design work I was doing for Gordon!

All the other animals are doing well. Emerson loves to hang with the goats... 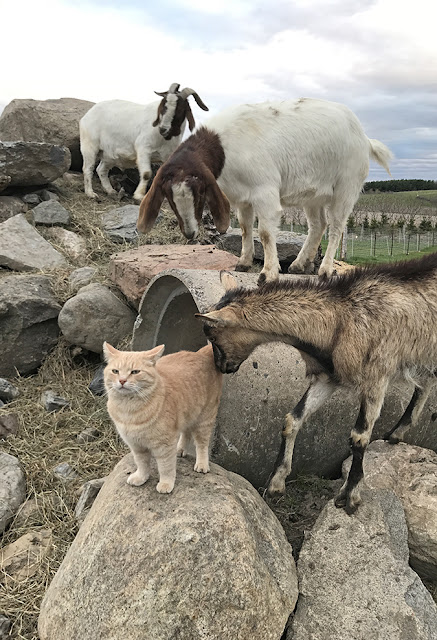 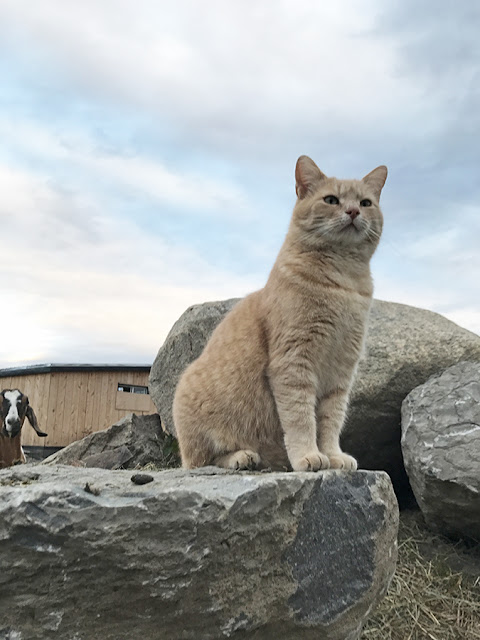 He is Cat King of Goat Mountain! 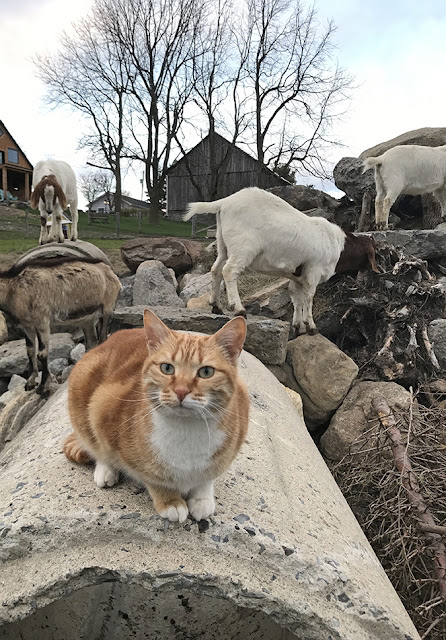 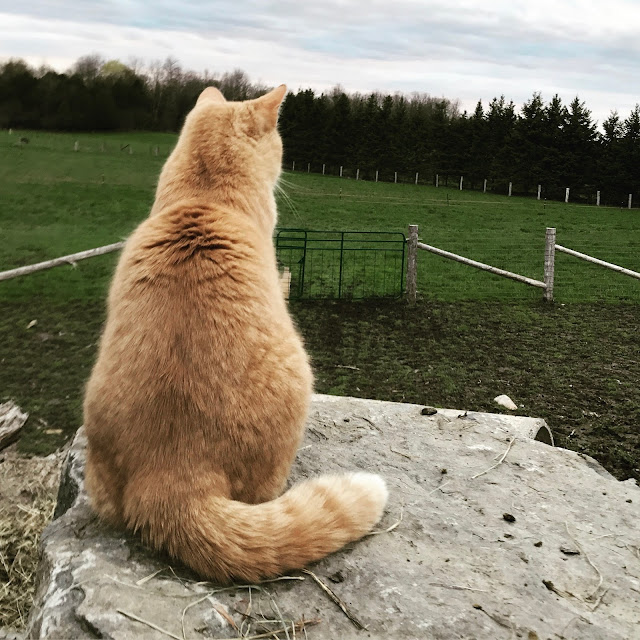 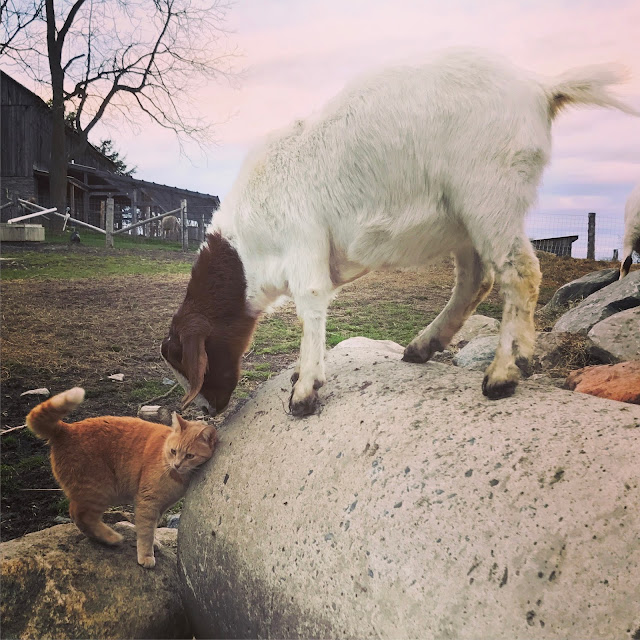 The friendship between the barn cats and goats is very sweet!

And Annabelle is a bit bossy: