For all you Gordon fans

Okay, I got a complaint about the lack of photos of Gordon lately. So as well as it being Hallowe'en, I am declaring today National Gordon Day, and celebrating with the following three photos! 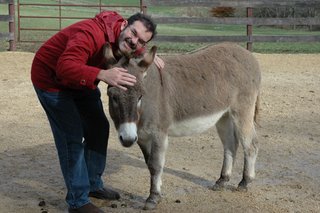 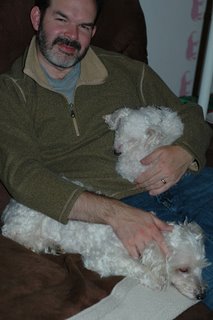 Gordon loves up Fred (bottom) and Clint (top), two of my friend's dogs. Clint is a tiny ancient poodle who was rescued from Hurricane Katrina. Gordon fell instantly in love! Apparently he is a small-dog man. 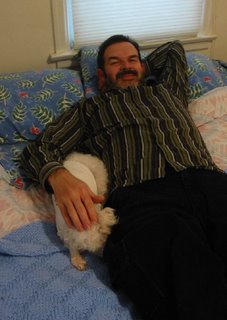 Okay. Can I now go back to my self-absorbed posting of photos of myself?!
Posted by Knatolee at 8:12 am 2 comments: 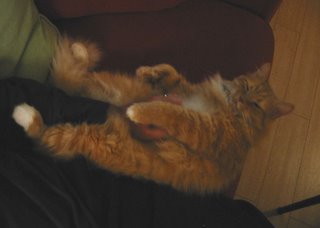 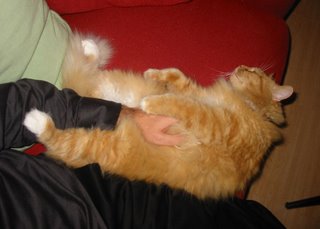 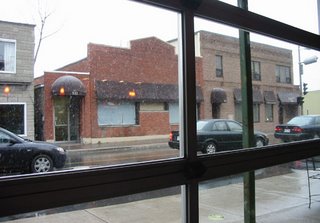 Julius keeps stealing the turkey feathers that I brought home. He really, reeeeeally likes them.
Posted by Knatolee at 8:46 am No comments:

We went to a great hat store while on our visit. Phyllis very reluctantly posed for me in this jester hat. She looks so darn impressed, doesn't she? 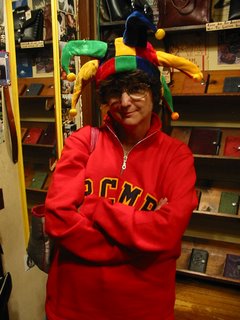 She isn't actually IN the RCMP. That sweatshirt was a gift from us. What she really wanted was a flesh-and-blood, serge-suited manly Mountie, but alas, that we could not provide. So we did what we could. 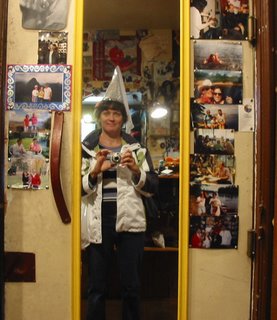 ... is quite possibly the most surreal self-portrait I have ever taken.

Everyone knows I'm a princess. I should have bought the hat to prove it!
Posted by Knatolee at 8:56 am No comments:

We just got back from visiting my friend Phyllis. What a great time we had! Here is a stunning abstract self-portrait of the two of us. I called it Nasal Passages of Time. 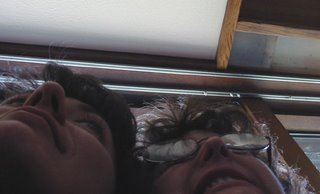 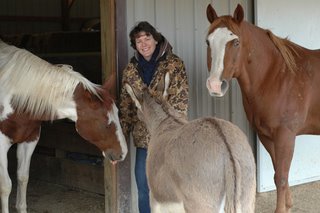 We visited Phyllis' sister's hobby farm and I communed with the horses and donkey. Everything was going very well. I fed them mints, and I loved them up, and I let them lick my hands (horse tongues are much more delicate than cow tongues!) And NO, that is not my camouflage jacket, just so you know.

Then disaster struck, and my husband clicked the shutter just at the very moment "Sweet Pea" the donkey CHOMPED DOWN ON MY THUMB and tried to walk away with it: 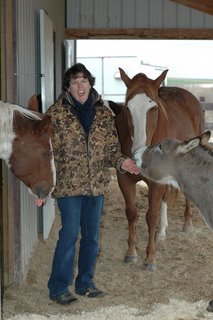 I had been so busy making sure the horses didn't make off with a digit that I didn't pay enough attention to Sweet Pea (aka the Human-Eating Donkey from Hades.) No lasting harm done, and it's a good thing donkeys are so cute. 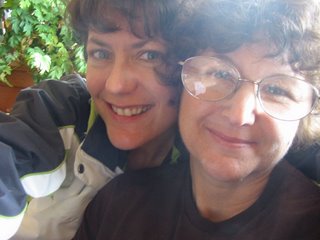 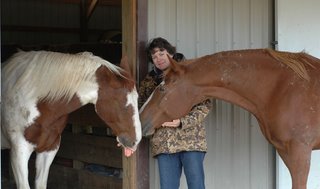 Posted by Knatolee at 8:39 am No comments:

Another day, another walk

For a change, my last walk was in the opposite direction to the previous walk I photographed. Here we have... 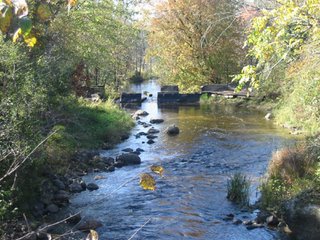 ... a pic from the bridge near the end of the road I walk along. 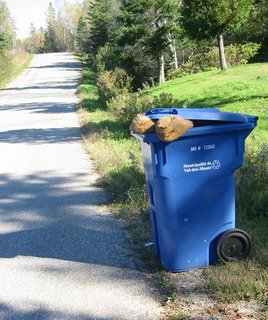 Someone is trying to convince the town that big fuzzy slippers are recyclable! My guess is NO. Gordon is certain that the slippers, which have been sticking out of this box for over a week now, have some deep and mysterious reason for being there. I just think someone figured it was worth a shot trying to recycle 'em. Or maybe not! Maybe they were left there by aliens with feet that are no longer cold. 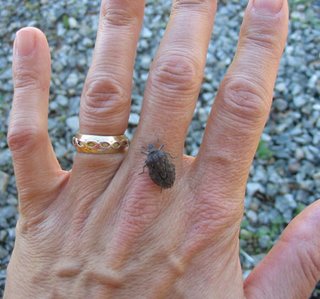 Skipping ahead to the end of my walk, and a hand badly in need of a full-throttle manicure, here we have the fellow who hitched a ride home on my shoulder. Assassin bug? I dunno, I'm really not up on my insects, and my field guide is sitting in a heated warehouse in Gatineau! (Btw, my wedding ring is an Irish claddagh ring but the exciting bit is twisted around the wrong way.)

Ya know, this year I went to a party where they had a palm reader. He sat me down, looked at my hand, and said "You're an artist!" How did he know? Do all artists have beat-up hands with a zillion lines and wrinkles in them, and short nails and chapped knuckles?? Actually, my hand is scaring me a bit in this photo. It looks eerily like my Dad's hand, albeit a girlier version.

My mother had very nice nails that she looked after. I do not! 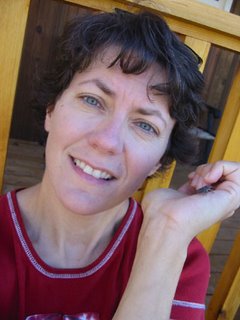 Self-portrait with bug. The camera is making my nose look bigger than it is. Really. It's also giving me wrinkles. Yup. 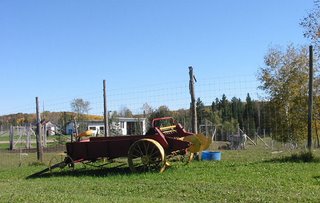 There is a deer farm just down the road, and if you look carefully here, you can see some deer to the right of the farm machinery. They are very cute. 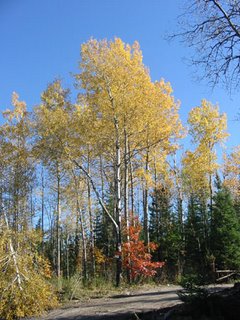 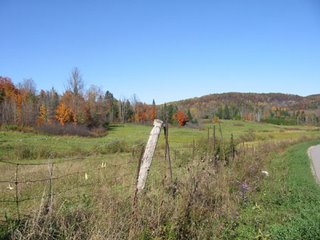 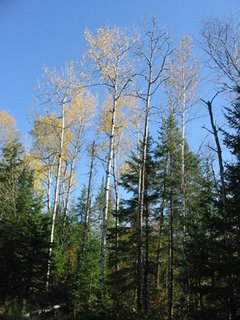 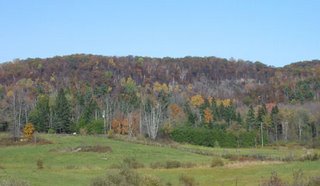 More fields and rolling hills. We ain't called "Val-des-Monts" for nothing: "valley in the hills", more or less.

Thus ends today's tour of the life of me. My blog is getting very pedestrian. Time to bring back the Spidergurlz or something!
Posted by Knatolee at 8:29 am 3 comments:

My peaceful countryside existence! Not a whiff of chicken manure, no sounds of subwoofers or squealing tires or motorized scooters or blueberry cannons... just crickets and birds. Ahhhhhhh!

Talk to me when snowmobile season arrives, however.

And here we have Miss Hairy Woodpecker, aka pic chevelu. I've seen at least two female hairies, and we have at least one male downy woodpecker frequenting the feeders, as well as northern flickers. And the other day I saw a juvenile yellow-bellied sapsucker. I live in woodpecker heaven. 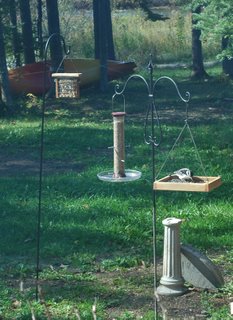 Not sure what knocked the birdbath top off! Some marauding night animal, I suspect. 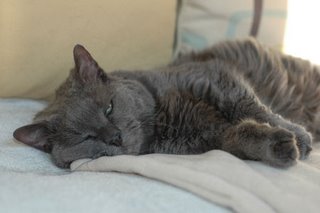 And here is our sweet Mashka, age 15. She has just been diagnosed with renal failure, poor darling, and has lost a lot of weight very quickly. She has been at the vet's for three days receiving IV hydration therapy, and she comes home tonight. We can't wait. She is Queen of the House, you know, and rules all that she surveys. I believe her look in this photo says, "Bugger off, I'm trying to take a nap!"
Posted by Knatolee at 10:37 am 3 comments: