Two weeks without posting! Alas, I have been mucho busy lately, between working on the illustrations for a children's book (my deadline is May and I am now officially sweating) and trying to buy a farm. We thought we had one this week, a 142-acre baby, but someone else bought it out from under us. Back to the search!

In the meantime, things have been hopping in the backyard. I give to you Bobby, aka Stumpy, the red squirrel with half a tail: 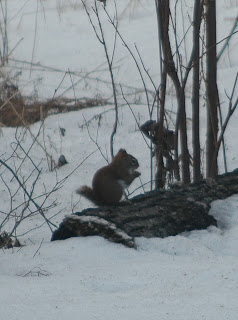 Sorry for the crappy photo quality. You do what you can when you're shooting through a dirty windy on a grey day! Bobby is very, very cute. There is something incredibly endearing about his amputated tail. No idea what happened, but it's an old injury and he's doing just fine without it. He has a great appreciation for my gourmet seed mix from Ritchie's feed store in Ottawa. 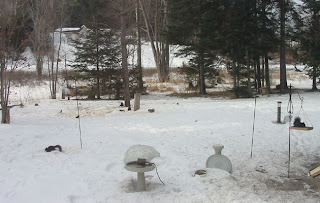 There are 12 squirrels in this photo, red, black and grey. Due to crappy photo quality, you may not be able to count them all. Do click on the photo to enlarge it. Some are in the feeders on and around the tree stump at the back of the yard, almost in the centre of the pic. Some of them look like dots in the snow. They are EVERYWHERE. They are like nits in a schoolgirl's hair!

I have thus far counted a maximum of thirteen squirrels in the yard. Never in my years of birdfeeding have I seen THAT many squirrels coming to the feeders all at once. And to think that for six months, not a squirrel visited! All of a sudden, word has spread through the bushy-tailed grapevine.

I call it Squirrelpalooza, and it's kind of creepy when there are that many running around the yard. They are rodents, after all. They don't give a damn if you bang on the windows in an attempt to scare them off. You have to go outside and yell at them to get them to move at all.


And here we have a ruffed grouse (at least I think it's a ruffed grouse) from last week. He/she was eating the cracked corn that I spread for the wild turkeys. But now we have mallards and black ducks coming on a daily basis as well ad the turkey-lurkies. Like I said, word has spread. Because you know, without me and my gourmet seed mix, shelled peanuts, suet and 55-lb bag of cracked corn, they'd all starve to death. Oh yes. 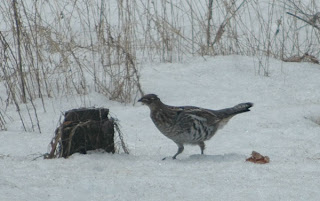 But bar none, the best wildlife event in ages happened last weekend. We had THREE pileated woodpeckers in the yard at once. Look at them!! Two females and a male, I believe... 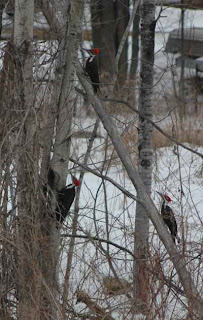 And then two of the girls spiralled up the woodpecker tree, so called because there are always woodpeckers (downy, hairy, pileated or northern flickers) on it, often pecking the bark to shreds: 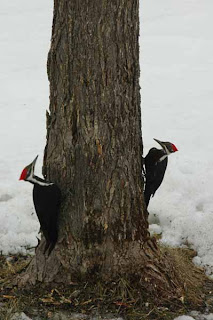 You should hear them screaming across the yard. You'd recognize the sound, as they apparently used to use pileated calls in old jungle movies. It scared the #$@#$ out of me the first time I was out there and heard it directly over my head as a pileated flew by.

I live in wildlife paradise! Too bad the roads are so atrocious, and I can't get a family doctor. We did $1250 worth of damage to our car's suspension and front brake caliper last week. We sadly both hit the same hidden pothole on the same day, and this was at the snail speed of 30 kmph. I would like to sue Jean Charest (Quebec premier) personally. The roads here remind me of the roads in, say, Cambodia. Or Sri Lanka. But I digress.
Posted by Knatolee at 10:14 am 3 comments:

My cats are tortured beings

Life is tough for the cats around here (Zoë and Julius). NOT. NOT! NOT!!

Zoë sleeps in the most unladylike positions. What a tart! She did manage to find the one patch of sun in my office: 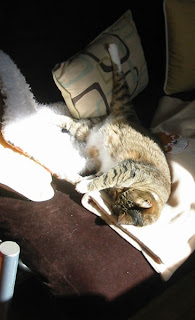 Julius was actually ASLEEP like this, in his kitty condo, when I took this photo: 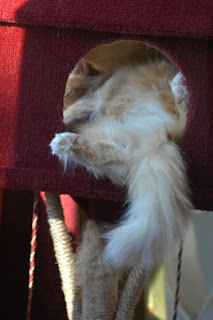 I wish I could be so relaxed!

Yep, life is tough for them. Free food, catnip, treats, more toys than they can handle, an outdoor kitty palace, an indoor kitty condo that is a blight on the landscape fo our bedroom (but hey, anything to keep the cats happy!)... I'm just waiting to be arrested by the SPCA.
Posted by Knatolee at 8:09 am No comments:

Is that a pink bikini or are you just happy to see me?

I haven't posted about my knitting for ages because I haven't been knitting for ages. After I had my hysterectomy last July (another reason I won't be having any kids! Good thing I had that done in BC, eh Monsieur Charest?), I found that in the evenings I only had energy to put my feet up on the couch and occasionally slobber as I watched TV or read. But I finally have 98% of my energy back, and suddenly I feel like knitting in the evenings again.

Can you guess what this is? 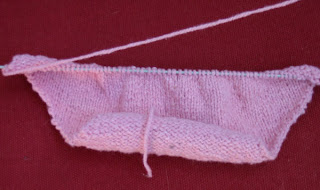 No, no, it's not a pink bikini...(with my finger touching a very naughty bit! Scandalous!) 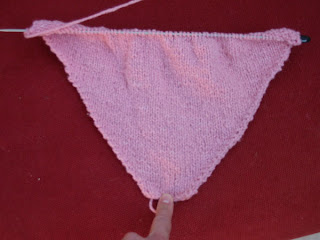 It's the beginings of... a CLANGER! Now, those of you who did not grow up in Britain in a certain era might not know what a Clanger is. My friend Sarah, who originally hails from across the pond, asked me many months ago to knit her a Clanger. My friend Dephal kindly donated some beautiful pink wool to the project, and now I am on my way.

Wikipedia has a useful article on Clangers that will explain things to you: The_Clangers

Here are some photos to help you wit your visualization: 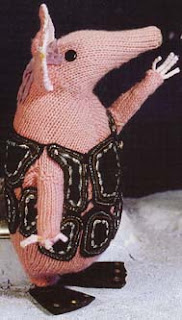 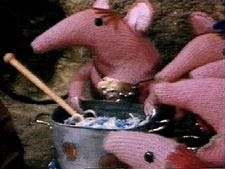 Should that not be enough, do visit this most excellent Clanger website. A treasure trove of information! And here is the knitting pattern I am using, which does not including a gauge, therefore I hope I am not knitting an elephant Clanger.

If this Clanger project works out, I may just knit one for Sarah's sister. I'll keep you posted!
Posted by Knatolee at 1:39 pm 3 comments:

Okay, here's the deal. We have finally realized that we are not going to be able to find the hobby farm we want to buy any time soon here in Quebec. So we have somewhat reluctantly decided to start looking on the Ontario side. There are some great hobby farms there, and we'll be paying significantly less income tax as a bonus.

One of the things that makes it easier to leave Quebec (which we both really love; we lived in Montreal for four years in the early 90s and had a blast) is the health care system. In our region, the Outaouais, it is actually IMPOSSIBLE to get a family doctor; throughout Quebec it is a problem. And now women in the Gatineau region are having to wait up to five months for a diagnostic mammogram. Which means sitting there, worrying that you might have cancer, for up to FIVE MONTHS! As for GPs, there are 67 empty doctor spot in this region, doctors who could be servicing up to 100,000 people.

But the thing that was really the last straw was the news that came out this week. First one of Quebec Premier Jean Charest's mignons, Charlotte L'Ecuyer, says that not everyone needs a family doctor, and in fact she herself doesn't have one. Bully for her! I guess she's never heard of preventative medicine. I guess she thinks it's great to go to the ER when you have the sniffles or need an RX refill. Soon after we moved here from BC, I needed to get some prescriptions refilled. Not able to find a doctor, I was told by the government agency looking after such things to go to the hospital ER to get my drugs. The ER!! What an appalling waste of my tax dollars, not to mention hospital resources. The rest of the country is trying to get people to STOP going to the ER for minor afflictions!

So Charest decides to damage control after Miz Charlotte's remark. After all, there is a provincial election later this month. He distances himself from her comments, and says that they are working to improve the family doctor situation in Quebec. In fact, they are going to prioritize access to GPs thusly: first access for families with children, the elderly, and those who are "vulnerable". Uh, so what am I, chopped liver? Because I don't have kids, I'm not elderly, and I'm not vulnerable, I don't deserve a family doctor? I don't think I am necessarily MORE important than families with kids, but neither am I LESS important.

Obviously this appalling lack of doctors (a lot of them leave to go to Ontario, where they are paid more than they are in Quebec) is not going to be fixed anytime soon, and even if they do start to fix it, who knows WHEN I will rate a doctor, being the childfree, unvulnerable, un-grey-haired worthless hunk of flesh that Charest believes me to be? I'd guess somewhere around 2025... but wait, I'll be a senior citizen then!

So, we're looking for farms in Ontario and I guess we'll have to visit Quebec to get our French cheese and culture. It's a shame, but what are you gonna do? I want a doctor, and I don't plan to have children in order to get myself one.