Peas please, and pass the disco

We had three minutes of sun yesterday so I was able to get out in the garden and pick some peas. Then the thunder came and I made a run for it and just missed getting drenched.
I am growing sugar snap peas and "Blue pod Capucijners", which according to my Cottage Gardener seed catalogue are "an ancient pea...developed by Capuchin monks in Holland." (I love Cottage Gardener heirloom seeds!) Needless to say, the pods are blue. Well, really they're purple. Whatever.

Here's a bowl of mixed peas: 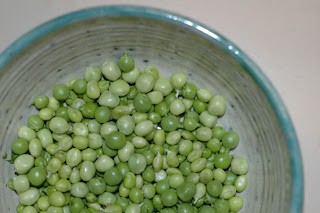 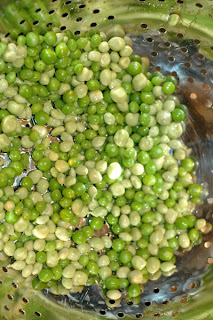 Now they are in our new freezer, which we are slowly filling. Currently it contains peas, raspberries, and two chickens from my friend Judy's farm. (No, I'm not telling my chicks what's in my freezer, nor am I telling them that I'm grilling chicken breasts for dinner tonight.)

Onto other news...
My friend and her hubby and their four delightful kids (they are! really!) visited for five days last month. Sophie reaaaally, reaaallllly wanted the licorice Robert was snacking on: 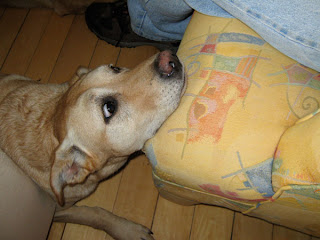 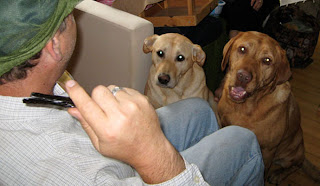 In fact, both dogs are apparently licorice fiends. (I hate licorice.) 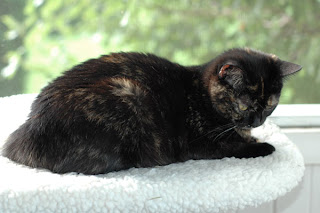 Naomi lounging on her kitty shelf. 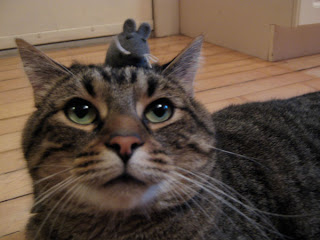 Alex the tripod-kitty being very tolerant of the 10-year-old boy putting a mouse on his head. Alex LOVES kids. Of course, we have none of our own (offspring, that is), but whenever any of my friends' kids come over, Alex is right there in the middle of the action. Makes me wonder if he lived with a family with children before he was caught in the leghold trap and taken to the SPCA.

Naomi likes kids too, but she likes everybody. Julius thinks children and most other visitors are absolutely foul.

And since it's a holiday Monday here in Ontari-ari-ari-o (but my hubby works in Quebec and took off St. Jean-Baptiste Day instead, and thus is not holidaying), CBC 1 has some whacky radio programming on. I just finished listening to an old broadcast of the venerable Lister Sinclair discussing disco music. I grew up in the 60s - 70s, God help me, just one of several reasons my childhood was hell. All the fumes from those polyester pantsuits would retard anyone's emotional development!

I sang along with gems like "Kung Fu Fighting", "Do the Hustle", and Boney M's stunning rendition of "Rasputin." No wonder I did a music degree playing classical clarinet... all that disco drove me to Mozart. Don't Rock the Boat, baby

No, no, okay, okay, I confess, I cannot lie, I admit it: I liked disco when I was a kid. I was in complete and utter love with that fuzzy-haired gnome Leo Sayer, and when my uni-browed Ukrainian boyfriend dumped me at 13, I dripped salty tears on vinyl as Leo crooned "When I Need You" over and over and over again. The Ukrainian, whom my mother's evil alcoholic then-boyfriend called "Super Uke", later reunited with me, but dumped me again when I was 16. I subsequently fell in love with an even greater idiot who coincidentally had the same first name as Mr. Uni-brow, and the soundtrack to that wretched romance was the Genesis album "Duke." Ciao, disco.

But in the disco era, I thought white pantsuits on men were totally hot, especially if the men had beards and hairy chests and gold chains and long hair. Eeyyyuw! (Well, I still love men with beards.)

I learned all about the Mad Monk after listening to Rasputin 4,639 times (I will still listen to a favourite song a hundred times in a row before moving onto another. Out of kindness to Gordon, I try to do that when I have my iPod plugged into my ears, not when we're together in the car.) Barry Gibb was my favourite Bee Gee and I wanted to bear his love child, but really Electric Light Orchestra was more my musical scene. When I wasn't listening to Beethoven, Tchaikovsky, and Wagner, that is. I especially loved Tchaikovsky's tragic life story.

That said, I have fond memories of doing The Hustle at Scarborough Music Camp in the late 70s. And ooh, let's do the Time Warp again!

"Everybody was kung fu fiiiiighting...." All you youngsters out there who grew up in the 90s don't know what you missed. And I have no idea how this post digressed from peas to disco.

Here's a little Boney M for ya... Ooooh! Those Russians! "But when his drinking and lusting and hunger for power became known to more and more people, the demands to do something about this outrageous man became louder and louder!"