No cute chick pics today but I have to take more because they are growing up fast, those wee birds!

Here is a photo shwoing about 2/3rds of what I somewhat lovingly refer to as the Vegetable Garden from Hell. It's about 5,000 SF and this photo doesn't do justice to its asinine size. Two people live in this house and I have something like 45 tomato plants.Yes, actually, I am insane. I'm planning on putting the veggie stand up at the end of my driveway again this summer. 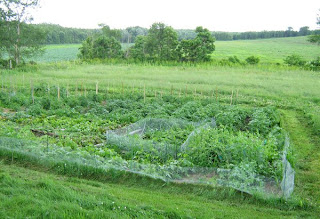 We've had too much rain and the weeds have been horrific. The weather SUCKS. I went in for another weed smackdown today and I think I have it under control. I have better things to do with my life than weed by hand! The tomato and potato plants are going nuts... oh heck, everything in there is going nuts. I need to get a garden helper or cut down on the size of this monstrosity.

Meanwhile, here is my sleeping beauty Sophie, with her horsie toy... 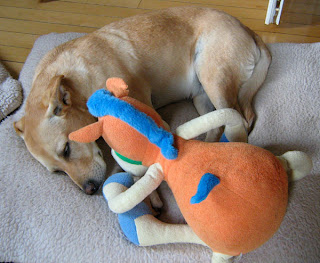 And dinner today was splendid. Here's a fuzzy shot of my Guinness and Gordon's fuzzy arm: 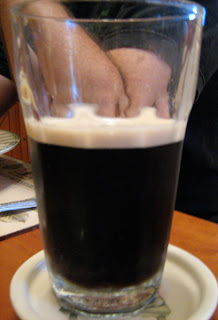 I don't drink a lot but when I do it's Guinness, or Kilkenny Cream Ale, or Boddingtons. I'm a terribly cheap date and one beer a week is about as far as I go! Nothing against drinking, but I've always been a lightweight.

And here is the pièce de résistance, the soup Gordon lovingly prepared for supper tonight: 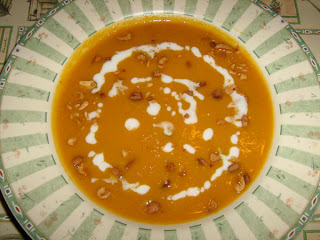 Curried Butternut and Peanut Soup, from Bonnie Stern's Friday Night Dinners. (Yes, I know it's Sunday.) The white stuff is coconut milk, the brown things are toasted peanuts. Oh my, oh my! I am so glad I taught that boy to cook.

On the chick front, all is well but on the bee front? I did my second hive inspection today and am 99.9% certain one hive is missing its queen. They have already got two queen cells on the go, meaning another queen is in the making (whoever hatches first will sting the other one to death in the cell.) The beekeeper who gave me my bees said they probaby assassinated the other queen for not being productive enough, and are making a new one. This is called supersedure. Tough world out there in the hives! As I read on Wikipedia: "When a new queen is available, the workers will kill the reigning queen by "balling" her, colloquially known as the "cuddle death"; clustering tightly around her until she dies from overheating." Death by cuddling... those wicked bees!

William the beekeeper is coming over tomorrow to take a look at my hives and hopefully reassure me that I haven't completely and utterly f*cked things up. And I get worse at lighting my smoker every week. I figure I am just overthinking it, since I light the fire in our wood/oil furnace every day in winter! Today I came back from the hives smelling like a forest fire...
Hope you had a good weekend and no one suffered from cuddle death.