I tell you, I am kicking myself daily for not cleaning my windows before it got too damn cold to do so! Taking photos through filthy windows? Not so great. And no, I am not going out into the storm today to take pictures. There's a heavy snowfall warning on and we are supposed to get a foot of snow and it's windy and nasty outside right now

The pics may not be great, but voila: the resident snow buntings! They have discovered my feeders and like to eat the spilled seed. I love these birds. These guys go to the high Arctic to nest and procreate; hard to believe something would consider this area their balmy winter retreat, eh? 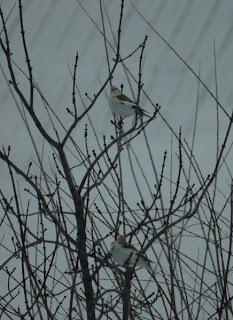 Then four of them settled down on the garage roof! 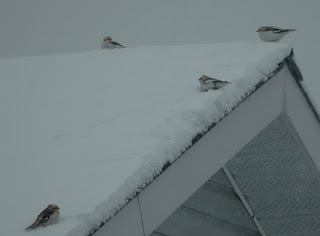 The pole thingy in the background is one of the lightning rods on our barn. 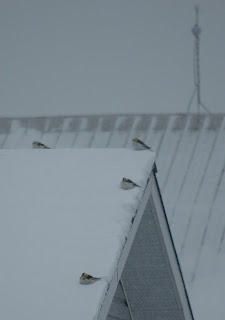 Nothing like having a good old clean-up in a snow storm! 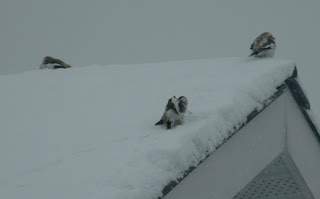 The snow buntings mingle around the heated bird bath. 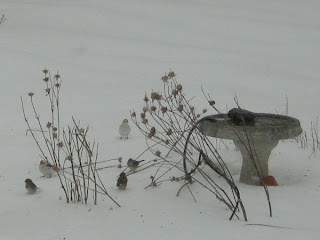 And remember the turkey from the other day who sits in the birdfeeder? We named her "Hillary", after the "American woman who wants it all", as my friend's Mom suggested. Well, Hillary has a new trick. She has decided it's too much effort to haul her carcass up into the birdfeeder, so now when she wants seed, she pulls on the platform until seed spills on the ground! 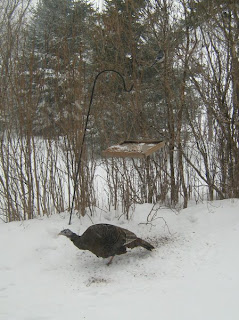 Note the copious amount of seed on snow around Hillary. My dogs are very pleased, as they love to eat birdseed (which I do NOT encourage!) Hillary is very kind to make it more accessible for them.

And after Hillary drained the feeder the other day, this mourning dove found a new use for it: 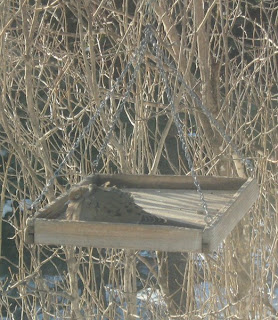 
PS: I'm pretty sure Hillary is a girl, but if I need to change her name to "Bill," someone please let me know! She's the pariah turkey, always her by herself. The other turkeys never let poor Hillary join in any turkey games.