The warblers vs. the cluster flies

The cluster flies were going nuts last week when the temps were warm. Don't know what cluster flies are? Lucky you! Visit here. There are many joys to country living, but this isn't one of them: bazillions of disgusting flies clinging to the side of your house outside, and the windows inside. Flies dying all over the windowsills, making hideous noises as they spin around on their backs. A thick layer of dead flies at every sill, which you have to vacuum up as often as possible. EEEEYUW! They are like stoned houseflies, sluggish and mellow but equally revolting.

I was therefore very pleased last week to see the yellow-rumped warblers (correct me if I'm wrong, HWB, are these females?) coming out in force during their migration to help eradicate these disgusting flies from the outside of our house. 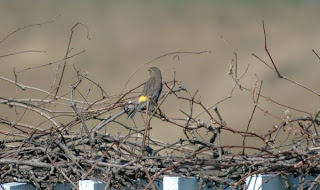 And where is she off to? 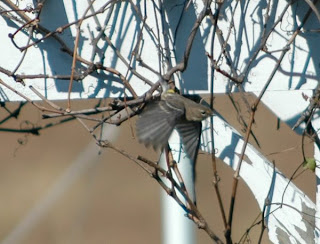 The screen of our front porch, which was swarming with flies... on the INSIDE. ...which caused the warblers a certain amount of frustration, since they were on the OUTSIDE. 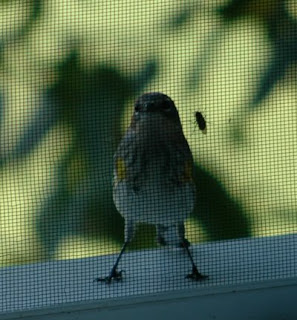 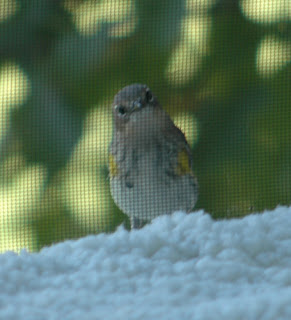 Not the greatest shot, but I was taking photos through screen... 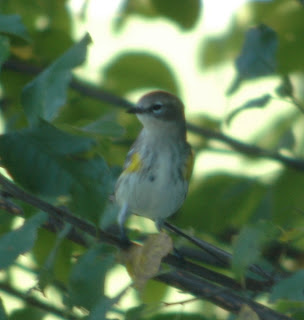 Can you see her hopping along the outside windowsill, between the cat shelves (hmm, guess I am going to have to get a third catshelf now!) 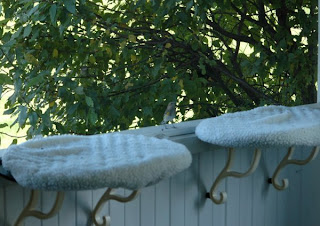 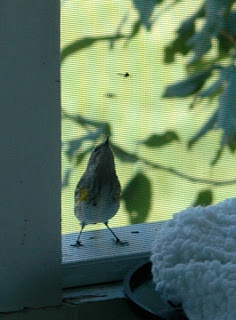 But no, she didn't have it. For several hours, they valiantly tried to catch the cluster flies infecting my front porch, with limited success (some flies were on the outside of the screen.) They eventually got frustrated but happily realized that our house siding was COVERED in flies, and so moved on to an easier meal.

And now I await the ladybug invasion, which is less revolting than the cluster fly one, and requires less vacuuming.

PS: I really hate it when a cluster fly drowns in my water glass during the night, and I don't notice it until AFTER I've had a swig in the morning (before I put on my glasses.) UGH!