Get out and vote!!! Make Nellie proud. 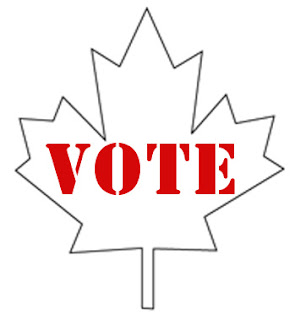 To my fellow Canadians who are thinking of NOT voting in today's federal election: please rethink that inclination! I know the current selection of candidates for Prime Minister is not particularly spectacular (except to a select few of you who are devoted to particular leaders.) I know we are likely going to end up with another minority government, and you may be thinking "What's the point of voting?" I know some people are just ticked off that we've had too many elections in too few years. I feel that way too. I am completely sick of elections and politicians. I want to hurl every time I hear a certain sweater-vested individual on the radio.

But I beg you to consider how sacred your right to vote is. I have visited countries where people have DIED trying to place a vote in a ballot box. Imagine wanting to vote so badly that you would place your life on the line for it. Well, I can't imagine anyone born in this country being that determined to put a ballot in a box; we're too damn spoiled.

And don't forget, if you're female, that it was not that long ago that women (like me, like you) were not ALLOWED to vote, period. The first province to allow women to cast a ballot was Manitoba, in 1916. That was just 92 years ago, my friends, which is not all that long ago in the history of the world. (My paternal grandmother was a 14-year-old in Ireland at that time.) Can you imagine not being allowed to vote just because you have a ovaries and a uterus? Well, that used to be the case in Canada, and we women owe our current rights to brave, determined women like Nellie McClung, who fought for us before we were even born. Don't disgrace these brilliant ladies by being too apathetic to get your butt to the polling station.

Here are a few articles for you to read and think about if you're someone who believes her/his vote doesn't count, so why bother? (You Americans should be thinking about all of this too, since your election is next!!)

Even if you aren't registered, YOU CAN VOTE

Voter Turnout: Apathy in the Ascendant

So get out there today, and VOTE. And I particular appeal to the youth and students amongst you, who are evidently the most apathetic voters of all. Rick Mercer had a great rant last week about why students should vote. If you want politicians to pay attention to you and your issues, you are going to have to start putting ballots in boxes, my friends. All you need to vote is an official piece of I.D. with your name and address on it. Even HOMELESS people can vote! Elections Canada wants to help you in any way possible! So just get out there and do it.

And while you are putting your "X" next to your candidate (who, I admit, may be the best of a bad lot, or even a protest vote, or a strategic choice), thank your lucky stars that no one tried to murder you as you lined up at the polling station. And promise yourself that you will vote in every election from now on! That way I won't have to smack you upside the head.

PS: If you don't vote, you have no right to complain about whatever government we end up with. I mean it! I don't want to hear it!

PPS: Still not convinced? I suggest a visit to Zimbabwe. Then get back to me.