Last year, the first snowfall of any consequence was on November 21, the day our dogs arrived. Here's a shot from the day after, with Gordon frolicking on his "snow day." (Btw, after November 21 we had snow on the ground until May.) 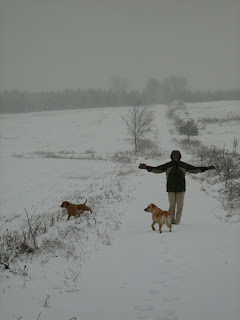 NOVEMBER. This was late NOVEMBER.
What is today's date? Yes, that's right. Today is OCTOBER 28. OCTOBER! But what is Environment Canada telling us? Environment Canada is telling us that starting tonight, we are going to be hammered by a winter storm. There is a winter storm warning on now, and we are supposed to get six frigging inches of snow, if not more, plus strong winds and a bunch of rain before the snow begins. It's already raining slop. Windy, cold, slop, crap crap crap.

The people at Environment Canada crack me up. This is how they started the latest warning:

"Although Halloween is still three days away... Some frightening weather is beginning to appear already."

Uh, yeah. I think I need to smack their heads together.

Now, for all you non-Canucks, you have to understand that complaining about the weather is our national sport (after hockey), one in which I indulge freely. We get tons of bad weather here. Tons. I have lived through many blizzards, thunderstorms, heat waves, -40C cold snaps, and one force 2 hurricane. I lived through six weeks of not seeing the sun in BC. Unlike you southerners, (and British Columbians) I don't do the chicken dance if I see half an inch of snow on the ground. ;)

And unlike you Americans, we don't have a Florida or a Hawaii to run off to when the snow is two feet deep. (Well, we do, we have YOUR Florida and Hawaii, but now that the Canadian dollar is back in the TOILET, journeys to the American south are not a cheap winter escape option for us.)

So I am officially COMPLAINING ABOUT THE WEATHER. I enjoy winter, I do! I cross-country ski, I snow-shoe, I make snow-angels, I get out there, then I come home and make a fire and drink hot chocolate. But for the love of all things HOLY, it is OCTOBER 28th! It's not even HALLOWE'EN. It is certainly not winter. The clocks haven't even gone back! How dare they tell me there's a "winter storm watch" on? I had to run out today and pick my last three cauliflowers, and some Swiss chard, cilantro, and the rest of the beets. (Screw the kale. The kale is on its own. Live free or die, Kale.)

I don't even know where my winter boots are!

So to all of you (this means you Eileen, bikini-clad in your summer weather in Lotusland, and you, Robin and Lizz, basking in the golden sunshine of the orange juice state, and you, Steph and Angela and the rest of you Georgia-types, snorfling down those PEACHES!), spare us poor sods in eastern Ontario a thought tonight as we get our first snow dump of the season. None of us are ready! Gordon and I certainly don't have snow tires on our cars yet (oooh, Gordon, what do you say about a snow day tomorrow?! I'll show you my marshmallows if you show me your hot chocolate.) Send a tiny, warming drop of sympathy our way, a little smudge of sunshine, a litre of home heating oil. Anything! It's just not right. Children are not meant to trick-or-treat in the snow. I had to do that more than once as a kid, and it was just plain wrong. Snowsuits cover up Hallowe'en costumes and totally ruin the effect. Tootsie rolls freeze in the goody bag before you can even make it home. It's hard to keep Hallowe'en pumpkin candles lit in gale-force winds. So GO AWAY snow.

Now excuse me. I have to go hunt for my boots. And the snow shovel.