I have a backlog of photos to post, and I'm sure many of you are missing your daily duckling fix. It's coming! But last weekend, we had this little visitor: 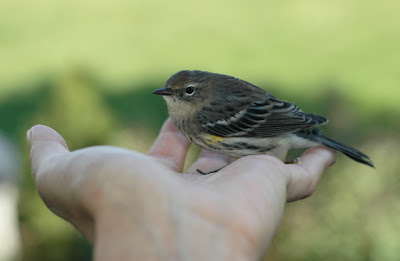 A Yellow-rumped warbler (yes, they have a yellow spot on the rump) flew into our screened porch and couldn't figure her way out again. I gently cupped her in my hands and took her outside, but she was a bit discombobulated and didn't fly away for a couple of minutes, which gave Gordon time to my camera so I could take a photo.  Beautiful!
We get masses of warblers visiting as they migrate through in fall and spring. We've had unseasonably warm weather this autumn, with an explosion of Asian Lady Beetles  and cluster flies. Lots of Yellow-rumped warblers have been flitting around our house on bug patrol. One day I found THREE of them stuck inside the porch, and I had to usher them all out. They were after the bugs on the screens.
Speaking of bugs, here's a pile of ladybugs (Asian Lady Beetles) clustered on sap oozing from a sick tree of ours. There's a wasp in there too, and this is also the tree the Yellow-bellied Sapsucker hangs out in all the time. 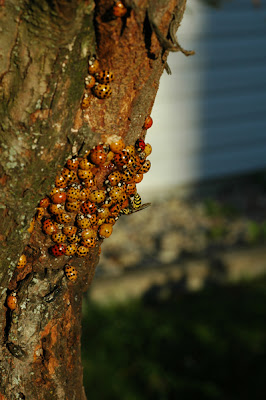 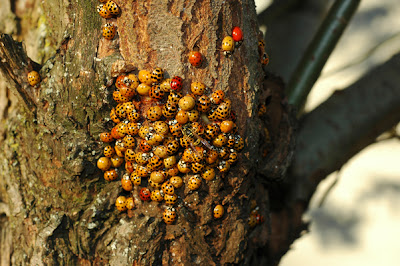 They have been congregating in the front porch, and also in the house. It's a bit much! 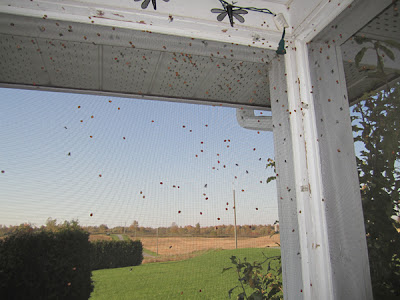 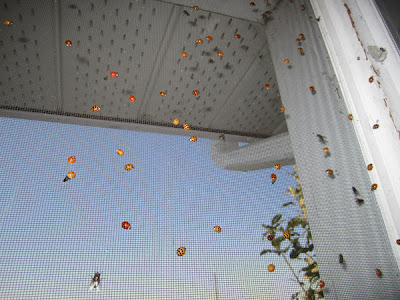 Still, you can see why the warblers fly in here when the door is open, looking for nummies!
Meanwhile, down in the duck run..
We let the chickens free-range last weekend and they thought the duck run was just great. The ducks ignore them, or occasionally give them a peck if they are in the way. Even the roosters respect the ducks! 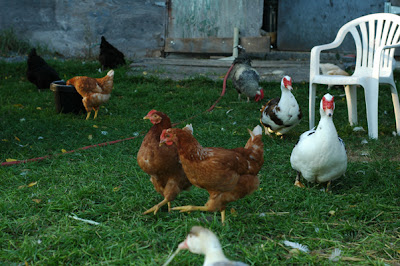 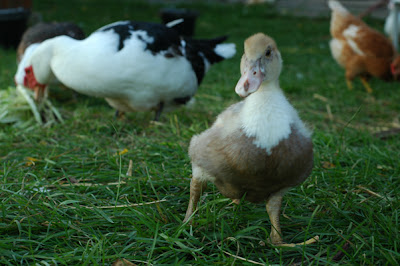 And here is Amy Winehouse! Her beak is healing well from her little accident, although I think she'll always have a slightly misshapen beak.  I love her colouring! Very brown underneath with a lovely white muff.
More duck pics and other excitement coming soon!
Have to go eat the big English breakfast fry-up Gordon just made for me. Unlike my Dad, he doesn't fry slices of bread in lard...
Posted by Knatolee at 10:14 am