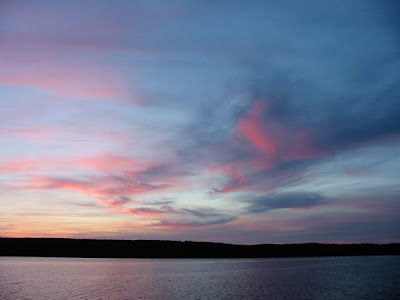 I don't know about you, but when each of my parents died, I got what I took as a sign. In my mother's case, it was a glorious sunrise. A few minutes after Mum passed, the nurse opened the curtains in her room to reveal an absolutely exquisite dawn. At the time, I knew in my heart it was my mother saying she was okay.

Last week, my neighbour told me to watch for a sign after Gordon's father died. I was a bit frustrated when nothing happened during the first few days. And if anyone were going to send a sign, I figured it would be George, who, despite being a nominal Christian, firmly believed in reincarnation! I think he was partly Buddhist at heart.

By the day of the cremation and service, I figured I wasn't going to get my sign. It was a chilly Tuesday when we drove to the chapel in downtown Toronto. When we arrived at the cemetery, it was icy and cold, and I got out of the car and went straight to the back door to help Mom out. And as I turned around, I saw it: a huge gravestone with the name "Campbell" inscribed across the top. We had inadvertently parked right next to a stone that bore my father-in-law's surname. It was my sign!

Now, I know full well this can all be put down to coincidence. Campbell is a pretty common surname in Canada. And I am a pretty "sensible" person, but I have to admit, I like to leave my heart open to possibility. For instance, I have never seen a ghost, but no one has ever proven to me that they don't exist, so who knows?

Two years after my mother died, I was missing her on her birthday. I happened to open a drawer in my dining room that day, and found a box of matches. Not very exciting, except that the matches had come from a Japanese restaurant we took Mum took for her birthday celebration a couple of years before she died! I chose to take that as another sign. My rational mind knows that can easily be ascribed to coincidence, but you know what? It gave me comfort! And who knows, maybe my Mum DID decide to send me a message via matchbox. :)

So when I got out of our car last Tuesday and saw the big Campbell tombstone squarely facing me, almost larger than life, I felt comforted. I felt like Gordon's Dad was telling us that he was where he was supposed to be, yet he was also with us in spirit on the day of his cremation and service. That's what I choose to believe, and it makes me feel happier.

What about you? Have you ever had signs after someone has died? I guess that wouldn't apply to the atheists amongst you, but who knows, maybe there's some last hurrah as the spirit goes out? I no longer belong to any religion, but my own belief is that the essence of us, our spirit, does go on in some form after our human body fails.

I am interested in what people think about this. Have you had a sign after a loved one has died?