A good apple pie will cure what ails you! 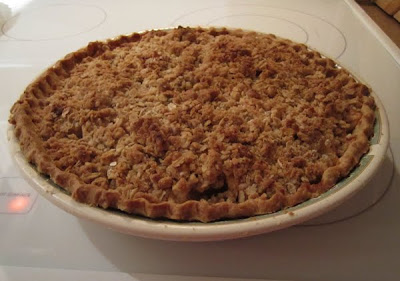 I decided to be extra-nice to Gordon this weekend and bake him an apple pie. I have used this recipe for years. I found it in the Montreal Gazette sometime around 1991, when I was living in sin with Gordon in that city. It has been our favourite pie recipe for many years, but it had been far too long since I had baked it for my sweetie-pie.

Think good thoughts for Gordon today. He has had a rough ten days and is heading back to work this morning on icy roads. There is still some pie left for him for when he gets home tonight!

• Pastry for single crust, nine-inch pie shell (I used the all-butter pastry from the Planet Organic cookbook, but use whatever one you like, or even a purchased pie shell!)

Filling:
6 cups peeled and sliced cooking apples (I like Cortland apples best for pie!)
2/3 cup packed brown sugar
2 tablespoons all purpose flour
1 teaspoon cinnamon
(I like to add some nutmeg too!)

1. Roll out dough on a lightly floured surface to an 11" circle. Fit into a nine-inch pie plate. Trim pastry and crimp the edges decoratively.

2. In a bowl, toss the apples with sugar, flour and cinnamon. Spoon apples into prepared pie shell, packing lightly.

4. Bake pie in oven preheated to 425F for 15 minutes. Reduce temperature to 350F and bake for 30 to 35 minutes or until apples are tender when tested with a skewer.

5. Place on rack to cool. Pie may be served either warm or cold with ice cream if desired. Serves six to eight. 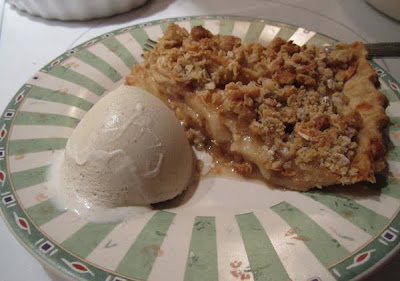