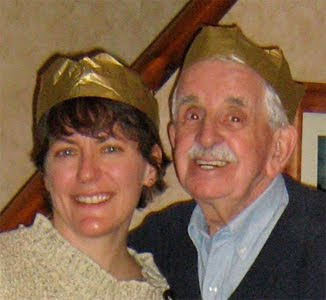 Me and my father-in-law George, Christmas 2007
I'm home after an absolutely crazy week in Toronto. We had a beautiful service for Gordon's Dad, complete with harpist, at the historic chapel of St. James the Less in Toronto. It is listed as a national historic site. The minister was Rev. Dr. Malcolm Sinclair, whom I have to say is the most eloquent, well-spoken religious official I have ever met in my entire life. And on top of that, he's a beautiful singer, and sang at the service. He even wore a kilt, and we'll forgive him for being a Sinclair and not a Campbell, because he did such a wonderful job. I can't believe how we lucked out finding him.

The harpist, Patricia Johnston, was amazing and the acoustics in that chapel were so well-suited to her exquisite playing. I just ordered all three of her CDs! :) 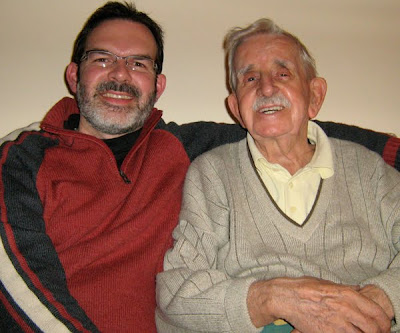 Gordon and his Dad, Christmas 2009

Dad lived a good life, and I am happy we were able to send him out with such a beautiful celebration of his 83 years on earth. Gordon and I both did the eulogies and I would like to post mine here later, although at 1500 or so words, it is quite long!

Dad became ill last Wednesday and was taken to hospital in an ambulance. They initially thought it was a kidney stone, as the pain was in his abdominal area. Mom left him overnight at the hospital, and when she got back Thursday morning, she was expecting to take him home. Instead, she discovered that he had been rushed to surgery. He managed to pull through, after five hours of arterial repair, but soon declined. I set a land-speed record for getting packed, getting the pets all looked after by our friends and neighbours, and driving Gordon to Toronto in 4-1/2 hours instead of my usual five or more. We got to the hospital at 11:30 pm Thursday, and we were there when Dad passed at around 1:18 am Friday (I looked at the clock.) So while he never regained consciousness after the surgery, I am very glad that I got Gordon there in time to say good-bye.

Go give your loved ones a hug and a kiss. You just never know what might happen!

And your true friends do amazing things for you when there's a sad event like this. Our friends Greg and Kevin made us the most extraordinary brunch on Sunday, pictures of which I will have to post later! And our dear friend Brian flew in from New York City to be there for us. We didn't know he was coming, so of course we both cried when we walked out into the chapel and saw him there. And my friend Beth attended as well, wearing a lovely plaid coat that was much admired by the Scots in the crowd! Thank you so much Greg and Brian, because I know you'll read this. You are two amazing examples of what a friend should be.


Here's the obituary we put in the paper...

CAMPBELL, George McKenzie - Soccer star, RAF Veteran, transport executive, loving husband of almost 60 years to Catherine, doting father and father-in-law to Gordon and Natalie, loyal brother to Alex, Duncan and the late Effie and Ian. Born in Glasgow, Scotland in 1927, he treasured his ties to the highlands of Tighnabruaich and Luing. He and Cathie arrived in Canada in 1956 on the immigrant ship Castel Felice. For many years he served as Director of Claims and Safety with CP Express and Transport. The soccer pitch was his first athletic love, the golf course his second, followed closely by watching just about any sport short of tractor pulls. His humour was renowned, as was his tenacity in fighting for the little guy, right up until his last day. Many thanks to Dr. Forrest, Dr. Shin and the entire ICU staff at North York General for their dedication. On December 7, 2010, a memorial service will be held at 2 p.m. at the Chapel of St. James-the-Less National Historic Site, 635 Parliament St., Toronto. Reception to follow. In lieu of flowers, please consider a donation to Right to Play (www.righttoplay.com) or the charity of your choice. www.torontofuneralservices.com 1-877-229-7077
Posted by Knatolee at 10:07 am