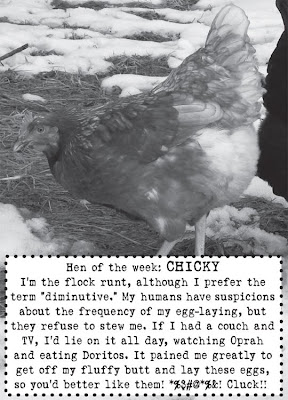 Chicky is the Hen of the Week for my egg carton cards. Before you start making jokes about her name, I should remind you that it was given to her by a smart, funny, adorable five-year-old girl named Hannah.

Chicky is the runt, waaaaaaay down at the bottom of the pecking order, but she has PLENTY of attitude. She also lost out on a worm this morning when Henrietta stole it from her beak. Actually, she only lost half the worm. Those suckers stretch only so far, then SNAP! and voilà: two worms instead of one!