Not for the squeamish...

Our poor, poor Julius! Last night he came home from the vet, after a two-night stay. He had three canine teeth pulled, and a drain implanted in his cheek, because he had abscesses under the problem teeth. I felt awful that it had gotten to this state, but he has been to the vet three times in the past two weeks, and it was only on the third visit that we figured out what was wrong. You couldn't tell it was a tooth issue just from examining his mouth! I took this photo on March 18th, just before whisking him off to the vet: 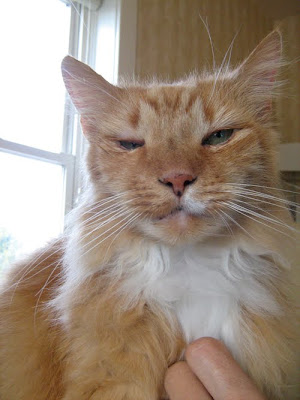 Working on the theory that it was an insect bite, the vet gave him antibiotics and anti-inflammatories, and told me to call back if things didn't improve quickly and dramatically. The swelling promptly disappeared, and we were relieved. But this past weekend, it started coming back, so I whipped him off to the vet again on Monday. On Tuesday they yanked the three teeth and inserted the drain. So while he normally is a very handsome fluffy orange 10-year-old cat.... 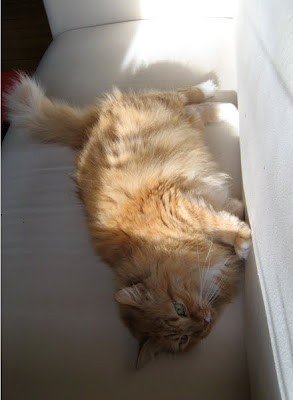 ****Here comes the photo not suitable for the squeamish**** 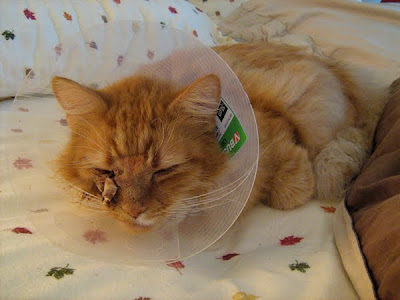 "Buster" collar and all! The poor cat. The drain comes out Monday. Last night Julius ate well, then spent most of the night snoozing on our bed. In fact, he's been there most of today, which is why I didn't make the bed this morning!

Thank you for all the good thoughts for our fluffy boy. His pain is considerably reduced now that the abscesses are drained and the problem teeth are gone. He's getting lots of tender loving care, but the other pets are totally freaked out by him. They keep looking at him like he's an alien, following him around, sniffing him... Sophie the Lab was obsessed with him when he first came home last night and was following him everywhere. Pets don't seem to compute Buster collars!