Relaxation for us both, I think. Last night, Naomi conked out on top of me while G and I were watching a movie. I sent him off to get the camera but she woke up before he returned. She fell asleep more or less sitting upright like a human (leaned against me) with her back legs splayed out in front, and front legs hanging limp. But by the time Gordon came with the camera, Naomi was having a bath: 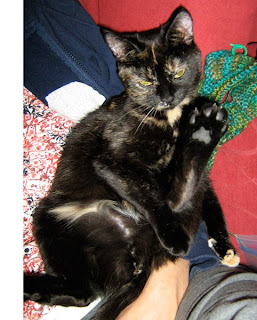 I had been knitting before she showed up, but stopped after her arrival, because the best toys in the word for a young cat are knitting needles and wool! I am making an ear-flap hat, knit on round needles. I decided to see what Naomi thought of it: 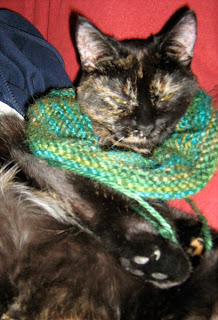 Not much, apparently!
Posted by Knatolee at 3:33 pm