Well, we had a lovely 16th-anniversary weekend in New York city! 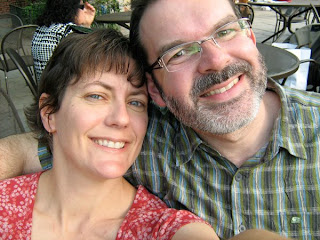 "Ahhh, 16 years and we haven't killed each other yet. Impressive, eh honey?"
"Yes dear."
Central Park was lovely! I figured you could fit our farm in that space approximately ten times. The weather was particularly glorious: 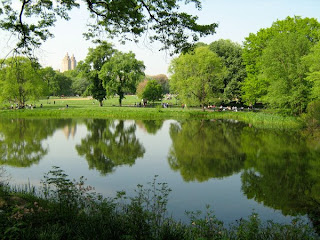 Normally we have appalling weather for our anniversary weekend getaways, but this year it was perfect. On Saturday it was 80F and sunny! 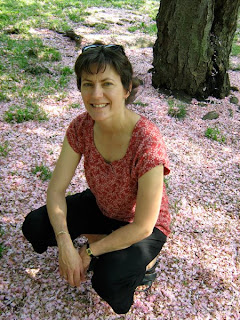 The trees and plants are several weeks ahead of where they are here. Our trees haven't even bloomed, whereas most of the flowering ones in NYC are spent. I rather liked this carpet of pink blossoms. 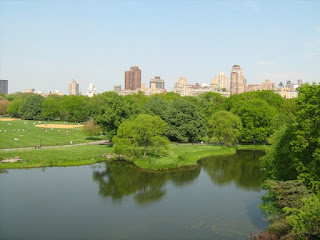 Nature within the city!
The saddest thing I saw in NYC was this mama duck and her lone duckling. They were paddling around the mini-sailboat pond. I have never seen a duck with only one baby. I shudder to think what happened to the others! Man, life must be tough in Central Park! 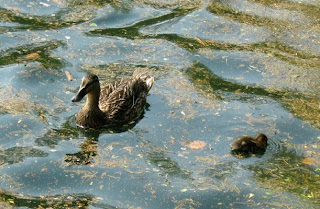 "I used to have siblings, until Donald Trump ate them." 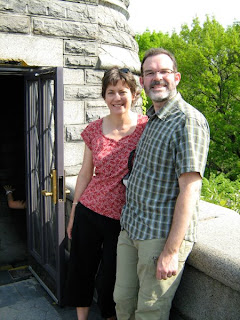 Some kind ladies took our photo atop the tower (the name of which I forget) in the park. 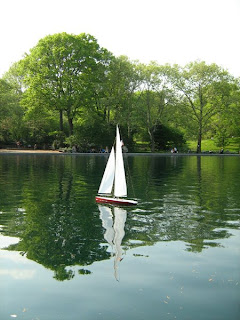 We ate coconut ice by the mini sailing pond, which was quite lovely. 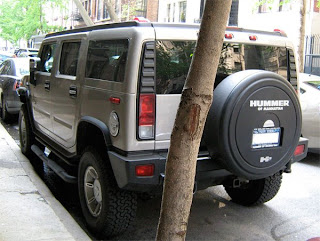 I can't imagine this thing is easy to park in the city. "Manhattan Hummer" kinda says it all for me.

And now over to Wall Street, where I fell into paradise... 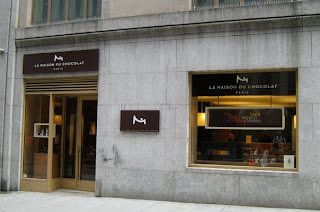 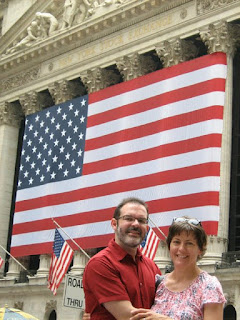 That is the biggest honkin' flag I have EVER seen in my life. Only in America! This is the Stock Exchange, for those not in the know.

Our friend Brian took us on the free Ikea ferry. It shuttles between downtown and the Ikea store, with great views. We brought baguette sandwiches with us to eat on the ferry as we watched the scenery and enjoyed the fresh breezes off the water. 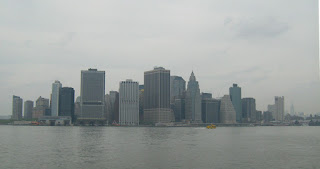 And then it was time for an impromptu photo shoot. Brian took lots of photos of us. It reminded us of our wedding day: all that smiling! 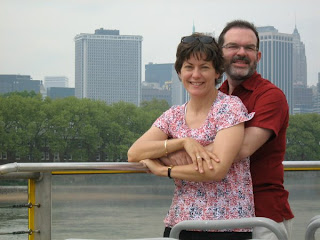 Then of course I had to ruin the romantic mood by trying to make rabbit ears behind Gordon's head. Which he evidently didn't appreciate. So touchy, that guy! 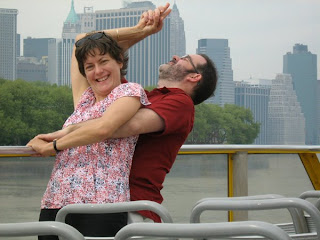 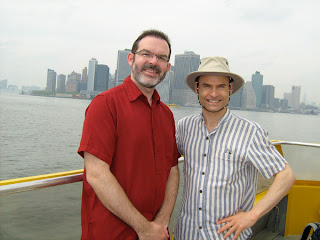 Back on the mainland, we walked some more. I saw this patient dog, waiting while his parents dined. They had thoughtfully provided him with water and a chewy treat. 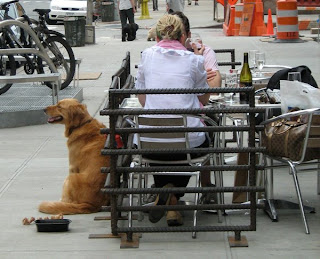 One of the things I particularly loved about NYC was the architecture. This is just a tiny sampling... 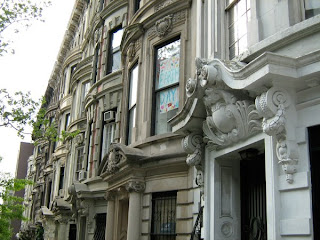 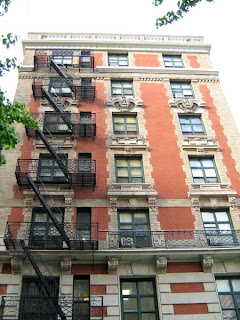 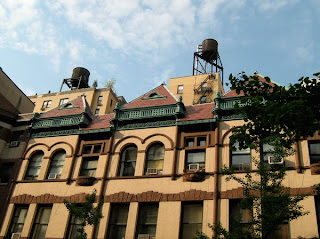 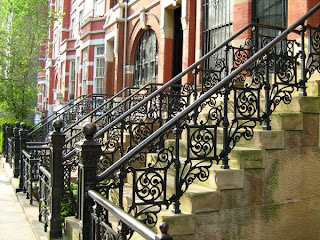 Saturday night, we went to Carnegie Hall to listen to a symphony concert. Staatskapelle Berlin performed songs from Mahler's Des Knaben Wunderhorn, followed by his Symphony #4. Pierre Boulez conducted and Dorothea Röschmann sang her little soprano heart out. The acoustics at the hall are, not surprisingly, amazing. What a great evening! 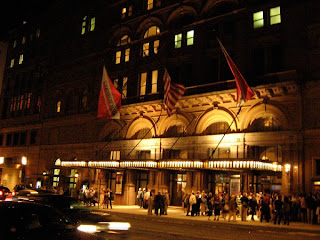 
After the concert, we got a wee bit silly. Brian was entranced by this racy Armani ad over the subway entrance. 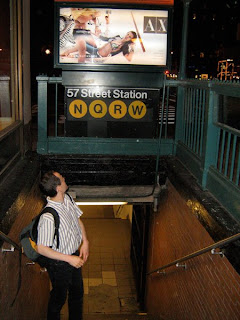 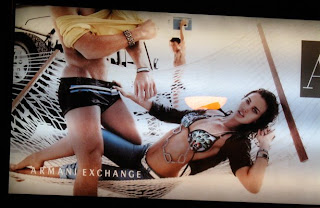 So I promptly attempted a re-enactment with my long-suffering husband. Ooh la la! We weren't quite dressed for it, though... 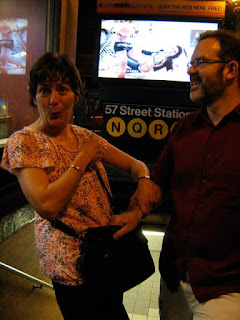 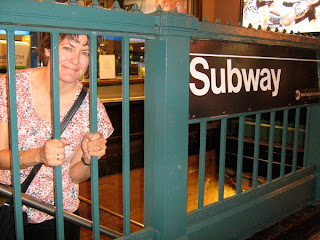 Behind bars, where I belong.

All weekend long, we walked until my feet were bleeding stumps, I mean, a lot. Sunday we passed some graffiti. Look at these two bad boys: 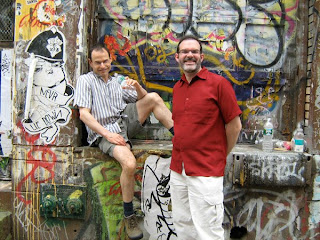 The hubster is looking a leeeee-tle tense!

And here is Nirvana: the Apple Store in SoHo, where I bought a fancy schmancy "skin" for my new iFeely. iTouch. iPod Touch. Whatever the hell it is! I named the iFeely "Jim" after my Dad, who would totally have loved that! Gordon gave me the iFeely for our anniversary, and had it engraved on the back. I was VERY surprised, and VERY happy! 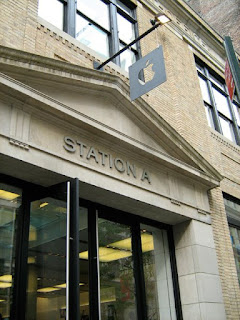 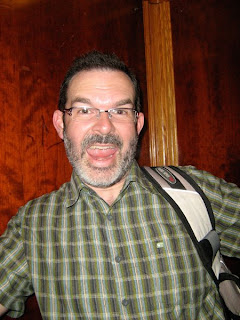