On Saturday, we went to the Value Village in Cornwall, which I have to say must be the nicest, best-organized, nicest-smelling Value Village in Canada! We've lived in four provinces, and I have frequented many Value Villages in my quest for wool skirts and scarves for my rug hooking, so I know what I'm talkin' about.

We dropped in mainly because I wanted to get a couple of stuffed toys for the dogs, but of course Gordon managed to find three books to buy (I am not complaining, since I have my own book addiction. One day our house will collapse from the weight of books.) The problem I had was that all the stuffed animals were too darn nice and I felt guilty buying them for my dogs to destroy. I managed to get over that and finally came home with... 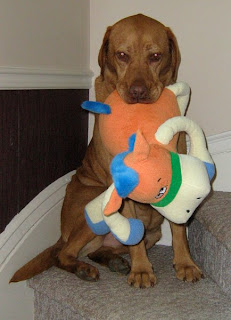 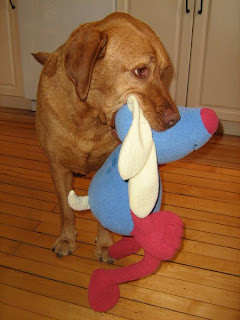 ...Puppy!
Sophie, being a bitch in more ways than one, kept trying to take possession of both toys, the biggest stuffed animals I've ever given the dogs. 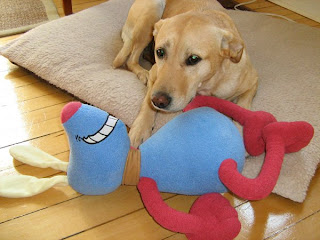 "It's MINE, Tristan. Step AWAY from the puppy!" 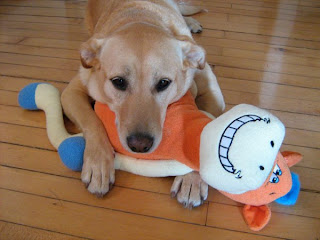 "This one is mine too, Tristan. You touch Horsey, you die." Horsey looks pretty nervous.

The dogs are NOT possessive about their toys when it comes to human beings. They don't say boo if a person wants to take away a toy (or their food bowl, for that matter.) But when it comes to Tristan's toys, Sophie specializes in the "snatch and grab." She rushes at Tristan like a snarling banshee, he drops his toy and whips his head away in fear, and she grabs the toy before it hits the ground, leaving one pathetic-looking Vizsladorable. (That's what we call our Lab-Vizsla cross, for those not in the know. No, it's not a breed! It's just our endearing name for the cute result of someone's backyard-breeding project. We didn't buy T, we took him in after his owner passed on.)

The doggy dufuses end up trading toys all day long. Tristan never challenges the BITCH (ahem, that's Sophie, not me... well, most of the time!), which is just as well as it prevents bloodshed.

But if I dangle a toy between the dogs, they both get in on the action... 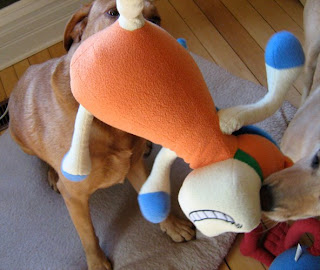 Sadly, Tristan IS a little rough on his toys. Perhaps he's venting the feelings he has for Sophie. If a toy has a squeaker, it usually takes Tristan 30 seconds to open up an incision and remove the squeaker. Occasionally he works on pulling out a bit of stuffing while he's at it.

The toys I bought on Saturday specifically did NOT have squeakers, but that didn't stop Tristan. Poor puppy is now... 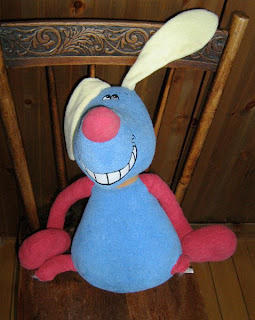 And yet he retains his enigmatic smile.

In other news, it's been rather busy around here. We've managed to assemble two beehives and Gordon has stained them white. I just have to put the frames together now so that they are ready for the girls to make honey and lay eggs on when they arrive (about three weeks from now.)

On Saturday we met for coffee (tea in my case) with an octagenarian beekeeper who is an absolute fountain of information. Next weekend we're off to his place to see his beeyard and pepper him with more questions.

Apart from that, I have been madly planting my billions of seeds in the vegetable garden. I also put in some raspberry and blackberry canes, and two black currant bushes. The strawberries I planted last year are all flowering wildly, so I am hopeful we'll get some berries before the dogs or birds find them. Time for some bird netting!

As for me, I'm off to the garden to slave away at seeding. Happy Monday!