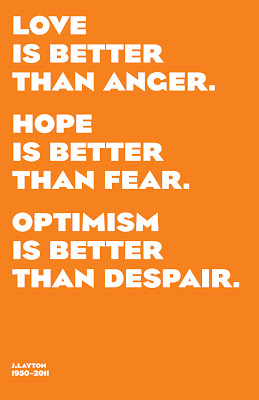 A poster created by art director Stuart Thursby, using some of Jack Layton's last words in a letter to Canadians.

You may have noticed that I don't spend a lot of time discussing politics on this blog. It's not because I'm not political, or I don't care; in fact I have very strong political beliefs. It's really just that this blog is about other things in my life, and I like to welcome everyone here, whatever their own beliefs. I have friends who vote in different places on the political spectrum, and I like to think we can all get along, even if we don't agree on who should be Prime Minister. Certainly my mother-in-law and I don't agree, but I love her anyway! :)
All that said, I can't let this day go by without commenting on one politician in particular: Jack Layton, leader of the NDP.  This year, for the first time ever, that party became the official opposition in our federal government. But as I was driving to Cornwall to drop off a print job today, I heard on the radio that Jack had died in the wee hours of this morning. He succumbed to cancer less than a month after announcing he would be temporarily stepping down to look after his health.
Most Canadians were shocked by Jack's appearance at that news conference in July. We all knew he'd been treated for prostate cancer last year, but apparently that had been going well. We also knew that all through this year's election campaign, he had been using a cane after undergoing surgery for a fractured hip (the reasons for that fracture were never really explained, but one has to wonder if it was related to the illness that took his life.) Despite this, he bounded through the campaign like the Energizer Bunny he'd always been.
But on July 25th, it was a different Jack that faced the TV cameras to tell Canadians that he was taking the summer to deal with a new cancer unrelated to his initial diagnosis. This was a frail, alarmingly thin, and hoarsely-voiced Jack. My own reaction was one of shock. When I saw this Jack, I saw a man fighting for his life, and I seriously doubted he would be back in September as he claimed. Not because I'm a doctor, but because I've gone the long haul with someone dying from cancer, and that look was familiar to me.  I feared he would not live through August, and sadly I was right. He passed away at home in Toronto this morning with his family by his side.
I am not usually deeply affected by the deaths of public figures. Yes, I'm sad when such people die, but it's not like I knew them personally. My mother died a week after Princess Diana did, and I think you can guess which death affected me infinitely more. I am, however, very moved by Jack's death (everyone called him Jack!) I feel that it is a loss to Canada and Canadians.
I have been thinking today about why I am so upset by this particular public figure's passing. Maybe it's because Jack worked so hard in the last election, and finally achieved something no other NDP leader had managed: a record 103 seats in Parliament, and the keys to Stornoway (the residence of the leader of the official opposition.)  All that, only to die just shy of four months after this historic achievement. It is tragic that Jack did not live long enough to enjoy the fruits of his labours. 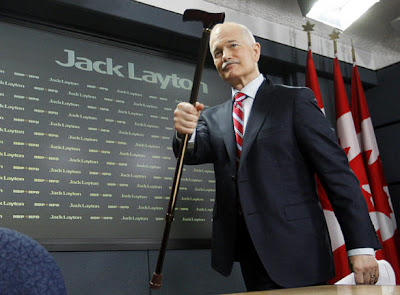 Jack and his trusty cane.  -Blair Gable/Reuters
I am sad too because the NDP and Liberal parties are now rudderless ships, and I think a democracy needs strong opposition parties to function well. Right now we have a majority government, and there's no one there to oppose them, at least, not the way Jack would have done. I'm not saying the NDP won't regroup and move forward, but at the moment, there is really no one fit to take on Prime Minister Harper when Parliament resumes next month. And that troubles me.
This year,  Jack ran a positive election campaign, without all the attack ads that are becoming popular in Canada these days. I loathe attack ads. I am upset that this American phenomenon is catching on here. I don't want to hear about the evils of the opponent; I don't want incessant negativity. I want to know what a candidate and his/her party are going to do to make life better for all Canadians. We need more politicians like Jack, optimistic and uplifting. I am sad we have lost  such positive political voice.
I am sad too because Jack died at the same age as my Dad: 61. It's too young, in a country where the average life expectancy is up around 81. I had been looking forward to seeing him take on the government in Parliament this fall. Finally, some lively debate! But it is not to be. We can only wonder what Jack would have gone on to accomplish had he lived 20 more years. If my Dad had lived 20 more years, he'd still be here today.
It says a lot about Jack that he was the most popular of the leaders, even though he did not become Prime Minister in the last election. Many people liked and trusted him, even people who disagreed with his politics. His popularity crossed party lines, an amazing thing.
And so I am very sad that Jack is gone. I wish we had more politicians like him, passionate and full of humour, always with a genuine smile. Today, many people were saying how they liked, respected and admired Jack, even though they could not vote for his leftist politics. The comment boards on news sites were full of remarks like that: "Great guy, class act, but I disagreed with his policies." Well, you might want to think about that a bit. How is it possible to separate the man from his beliefs? Doesn't it stand to reason that the beliefs that shape the politics also shape the man? Maybe some people need to think a little bit more about who they admire and why.
The poster at the start of this post, Jack's own words, says it all for me. It encompasses my deepest beliefs. In life,  I think you can act from a place of love, or you can act from a place of fear. I think you can live your life in hope and with optimism (realizing that there will always has been and always will be suffering on earth) or you can turn inward and live in despair and pessimism. You can focus on what you have, or you can focus on what you don't have. You can work on improving yourself, or you can work on tearing down others. It's up to you.
And that's why I liked Jack. He was humourous, respectful, kind and energetic, hard-working and always smiling. Sure, he had flaws, and nope, I didn't agree with all of his policies (I have been quite pissed off at him on occasion!). But I agreed with enough of them. I think his last letter to Canadians, written just two days before he died, exemplifies his love for Canada, and his commitment to public service.

And so I am sad today, sad about a guy I never met. Because I think that Jack made Canada a better place, and now he is gone. I like to hope that other politicians will learn from his example, but I'm not optimistic.

And on that note, here's a video that shows not only Jack's sense of humour, but his musical talent too:
Good bye, Jack. I'm sorry you won't be here this fall to be a thorn in Steven Harper's side.  Thank you for caring about all Canadians.
Posted by Knatolee at 8:49 pm