I have been experimenting with some more needle-felting. I want to come up with some more things for my Etsy shop.This thing started out as a chicken, then deviated far, far from plan.. 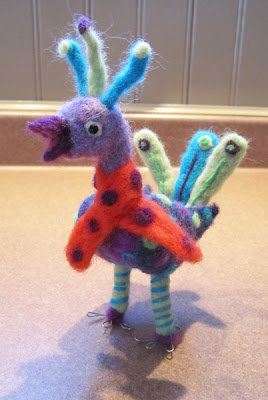 That ain't no chicken. But my friend Ginny came up with an excellent name and description for it:

"It's a SPOTTED Purple Cockaraptor, from Peru. Much rarer than the plain purple, and only found in the highest Andean peaks. It builds its nests lined with vacuna fleece, and incubates those eggs for 13 months. Its young hatch fully feathered, though its spots only develop at maturity." 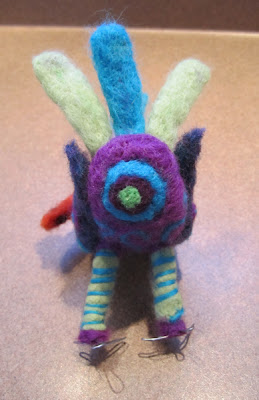 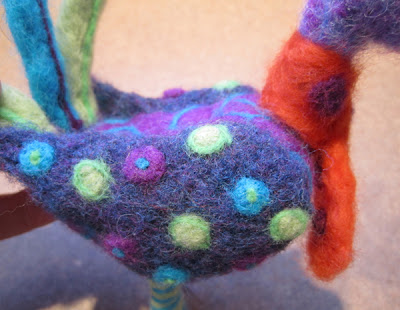 "And this one is a male, identifiable by the scarflike red "beard," which, during mating rituals, engorges and stands straight out from the chest and waves enticingly up and down, up and down, up and down. Female spotted purple cockaraptors (correctly known as henaraptors, but rarely so noted...) find this irresistible, and often can be seen scratching scores in the ground before picking their mates." 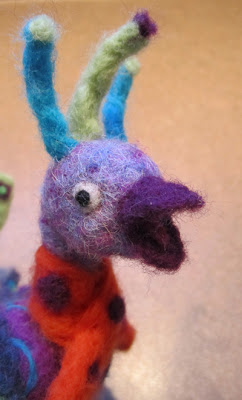 "This species is often misidentified as the Lesser Targetbottomed Lavendar Cockaraptor. The LTLC is half the size of the Spotted Purple Cockaraptor, lives at lower altitudes, has paler coloration, and seeks alpaca for its nest lining - all critical differences which should eliminate any confusion."


Ginny's description is so awesome, I have stolen it for future use! 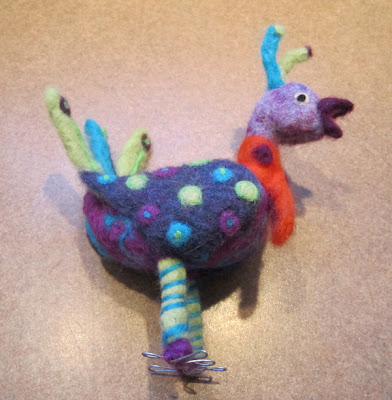 Sometimes the Spotted Purple Cockaraptor falls over drunk after eating too many fermented poo-berries!

I am being careful to keep this thing out of the reach of cats, especially young Miss Emily. Next needle-felting project? A Dappled Short-tailed Devil-Spawn Angel Wool-sucking Kitten!