A decade goes by fast!

I got my first digital camera at the end of 2001, but I continued to use my old Pentax K1000 SLR for some time after that. Camera cards were smaller then and held fewer pics, and the photos I took were at a lower-quality resolution. So my digital output was considerably smaller than it is these days. Still, I thought I'd check in iPhoto folders and see if I took a pic on this day ten years. The closest I could get was March 2002....

We lived in Nova Scotia then and I was out walking our friend's Aussie Cattle Dog, Graycee. Graycee is still going strong and is the smartest dog I have ever known.

And yes, my hair is naturally curly/wavy like that. It was extra curly in NS because we lived on the ocean and there was lots of moisture in the air. I had never straightened my hair in my entire life until my hairdresser tried out a new cut on me about a year and a half ago. I doubt I'll flat-iron my hair forever, but for now it's still a novelty and not much effort.

I can't believe ten years have passed since that photo was taken and I'm now pushing the half-century mark. What the hell!?!? 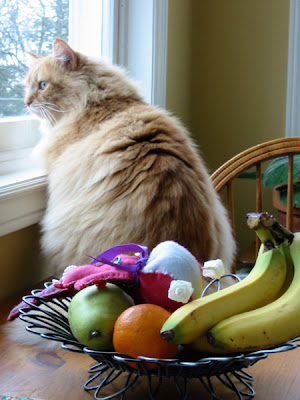 And here is Julius in March 2002. He was still an indoor/outdoor cat then, and was sporting the remnants of his magnificent winter coat. We had a birdfeeder outside our kitchen window and that's what he was watching.

I miss my yellow kitchen!