I love this one. It's so me: constantly distracted from work by what's going on outside. I figure that when we get the farm I'll be doing at least half my work outside. Better!

I meant to do my work today,
But a brown bird sang in the apple tree,
And a butterfly flitted across the field,
And all the leaves were calling me.

I meant to do my work today,

But three raccoons were screeching over who got to plonk his big butt down in the middle of the platform birdfeeder,

And a flock of wild turkeys flitted across the lawn, then started clawing it to pieces, looking for corn that the raccoons had missed,

And all the birds were calling me, telling me to get my ass out there and fill up the feeders the raccoons had emptied, because damn it, they were hungry!

Here's your nature pic, from the night of Monday the 18th. That's the moon, with Venus to the lower right. Saturn is in this pic too but you can't see it (no really, it's there. I swear!) It soon appeared in the upper left. My photos would have been better had I bothered to get out the tripod. Handheld camera plus slow shutter speed equals mostly blurry photos! We did haul out our 8" Dobsonian and oooohed and aaaaahed over Saturn, Venus and the moon! I will never get over the thrill of seeing planets through the telescope (yes, I know the moon isn't a planet but it's still pretty cool.) Saturn remains my favourite. 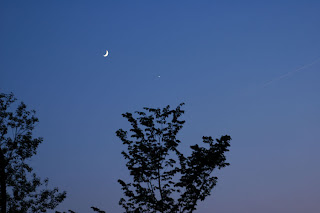