Welcome to my wild, wild world.... 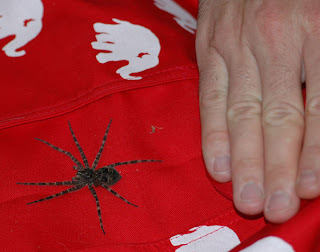 Hubby's hand is there for size comparison. The photo doesn't do it justice. I don't know what type of spider this is, other than that it's a very large version of the usual spiders I see around the house (fishing spider, maybe? Enlighten me!) I need a spider field guide.

Now I love spiders. They are fascinating, beneficial insects and I never kill them. I did, however, rehome Miss Pseudo-Tarantula to our back porch. I had visions of one of the cats playing with her in the house and getting bitten. I also didn't want the cats to murder such a fine specimen of spidery-ness!

"You kill what we fear and you fear what we don't understand." (Sort of non-sequitur: That's a line from my favourite Genesis album, Duke. My love of that band says something about how middle-aged I am! They are actually doing REMAKES of Genesis songs now. I feel ancient.)

Educate yourself about spiders and you won't go around squashing them, or God forbid, spraying them with Raid or other toxic substances that are just bad for the planet. I'm not asking you to cozy up to a Black Widow. Just don't mindlessly kill spiders!

And next we have the Masked Acrobat: 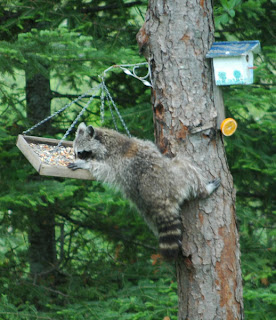 I had put the orange out for the Baltimore oriole couple frequenting our yard, but the yellow-bellied sapsucker devoured it instead! :)

We have two young holy terror raccoons in our yard. I am honestly not trying to encourage them. The smaller one is very bold (or stupid) and comes right up on our back porch and doesn't run away when I open the door! Even shooing it off has little effect. In fact, he usually looks like he wants to come inside for a cup of tea; no aggression, just a curious look on his face. We took our recycle bin off the back porch to remove temptation, and our garbage cans are locked in the garage. But the raccoons amuse me so much that I don't begrudge them their daily birdseed. I just make sure we do nothing to acclimatize them to humans (apart from feeding the birds, which I don't plan to stop doing.) That said, raccoons are doing REALLY well in Canada. They are one of the few animals that have adapted to city life and thrived.

Yesterday I did take issue with the fact that my nice Droll Yankee peanut feeder had completely disappeared. I knew exactly (raccoon) who the culprit (raccoon) was (raccoon.) Fortunately I finally found it in the middle of the yard. The Masked Hoodlum hadn't even figured out how to get the lid off! The other night the pair of them were squabbling outside our bedroom window over who was going to get to climb up the birdfeeder post first. The sound of it totally freaked out the cats.

And now, the moment you've waited for, more photos of Cape Breton Buddy, enjoying his post-pound life. I love this guy! 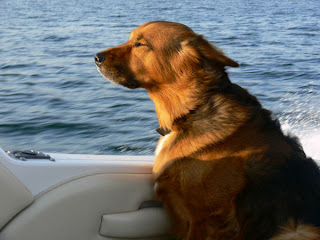 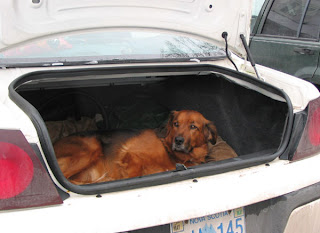 "Helloooo? Are we going or WHAT?" 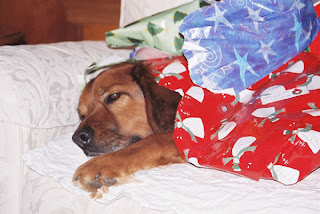 "Hey, I'm the best present of all. And I must be a special dog to be allowed to sleep on a white couch!"
Posted by Knatolee at 11:27 am