Well, I sort of lied on Sunday. I didn't post yesterday, so it wasn't about ducklings. Today, however, is about ducklings! Surprise, surprise. I didn't really want to write about this stuff  until I was sure everybody was okay. Over the past few weeks, we've had THREE near-death duckling experiences! These little cuties are worse than toddlers for getting into trouble, I swear.
First, we have Amy Winehouse duckling: hell-bent on self-destruction. 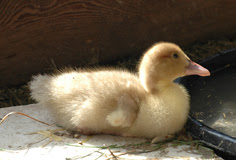 In her first week of life, she nearly snuffed it. We went out to the duck run to shut everyone in for the night, and discovered we were short one duckling. Much frantic searching, and still we could only find eleven. I gave up, figuring Mama ate her baby. We just couldn't figure out how a duckling could disappear in the Fort Knox duckling run. But before we went back up to the house, I did one last search, and found Amy hanging upside down from the chicken netting under the step into the duck house. It's hard to explain the situation, but it was the one weak spot in the whole enclosure where a particularly determined duckling could get into trouble, and Amy found it. I rescued her just in time, as she was feeling quite cold and I think she had hypothermia. I took her inside and warmed her up under a lamp. She soon perked up, started eating, and seemed fine, so back to the duck run she went. Gordon fixed the weak point in the run. All was well with Amy until yesterday...
(If you're squeamish, look away from the next photo!)
We went down the run and found Amy cuddled up with two of her siblings, bleeding from her beak with blood all over her feathers. What the HELL?!! I still don't know how this happened, but she had large crack running vertically down one side of her beak: 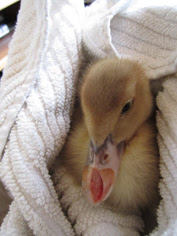 Poor litte angel! This is her after I cleaned her up.
We managed to get the farm vet on the phone right away, and he said that if she was eating and drinking, it was best just to clean her up with soap and water and let the beak heal itself. So we brought her in and I watched her for half an hour. I gave her a warm bath in the kitchen sink, dried her thoroughly, and kept an eye on her. She was eating and drinking enthusiastically, so we took her back to her family and looked around the run to try to figure out what happened. We have two theories. She might have gotten her beak stuck somewhere, and damaged it in a frenzy of trying to free herself (but we can't figure out where this might have happened.) The other theory is that she stuck her beak through the chicken wire and chain link fencing, and one of the drakes came along and tried to chomp it off. On Sunday, I removed the board I had running along the front of the run, because I thought the ducklinsg were big enough now not to come to any harm if they could see out the chainlink/chicken wire fence at ground level. APPARENTLY NOT! The board is back.
Amy seems fine this morning so fingers crossed the beak heals up and grows okay. The vet said that it was best just to leave it alone and that the more we fiddled with it, the more likely it was to get worse.
I am starting to think we need a baby monitor down there so I can keep a closer eye/ear on things!
And then we have Squishy... Squishy is fine, but there's a reason she has this new nickname. Early Friday morning, Gordon came into my office with this duckling in a box. Apparently, he had STEPPED on her while letting everyone out of the duckhouse Friday morning. Poor Gordon, he was devastated over this and it was of course a complete accident. Apparently Squishy rolled over and closed her eyes, and Gordon was sure she was dead. But by the time she was in my office, her eyes were open and she didn't look too bad.
I felt her all over for broken bones but everything seemed fine. No blood was oozing from any orifices, and she didn't seem to be in pain. However, she was having trouble standing up, which was worrisome. When she tried to stand, she seemed unable to support her front end, although her wings and legs and neck all seemed in working order. I decided to keep her in a box in the warm bathroom for 24 hours and see how things went.
Her appetite was voracious, and she was pushing herself around with her legs. By the end of Friday, she was managing a few steps upright. I gave her a stuffed toy to cuddle up with, and Friday evening, she snuggled in a towel against my chest while we watched TV.
By Saturday morning, she was managing more upright locomotion, and we decided she was well enough to go back to her family. She has improved steadily ever since and apart from a slightly wonky walk, she seems just fine now. Ducklings are so resilient! And Gordon is greatly relieved. The last thing he needed was a dead duckling on his conscience. He is VERY careful about where he puts his feet in the duckling run now.
So there you go, three near-death duckling experiences. I am waiting for another from this little firecracker. We have named her Danger Duck for the time being: 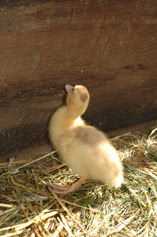 She is always running around on her own like a maniac, trying to catch flies and just acting like she's over-caffeinated. On Sunday, we banished the two drakes and Ronna-duck to the barn for a bit while we let the babies and Mama Eugenia out into the main run for the first time. They had a blast, but eventually Mama led them all back to their house. We let the adults back into the main run, but then Danger Duck decided to make a run from freedom. She zoomed out the open duckling run gate into the main run, and MacGregor decided he was going to check her out, which I did NOT want. After some effort, I managed to capture Danger Duck and put her back with her siblings and all was well.
Last night I came up with the first verse of a song about her, sung to the tune of the Spiderman song:
Danger Duck, Danger Duck, pretty soon you'll be out of luck!
Break a beak, crack a skull... life in the duck run is never dull.
Look out! Here comes the Danger DUCK!

You know, I think it's a good thing I didn't have any human children... these ducklings will be the death of me.