Fruitcake is evil and must be stopped...

...but because I love my husband, who is totally misguided and adores this stuff, I made a dark, rum-soaked fruitcake last Saturday. I hate fruitcake so much that I have a button with the word "fruitcake" in a red circle, with a red diagonal slash through the word. Like this: 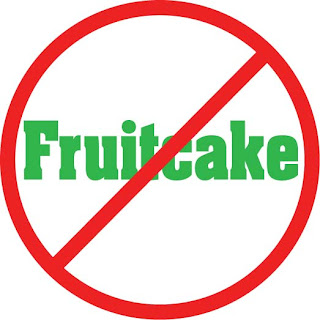 Now mince tarts or mincemeat pie, THOSE are delicacies well worth eating at this time of year, and I am in fact making and canning mincemeat (the meatless kind) today. Homemade shortbread? Fantastic! Dephal's peppermint bark? Truffle mice (see recipe at end)? To die for! But fruitcake is an abomination. A blight on the face of respectable society! 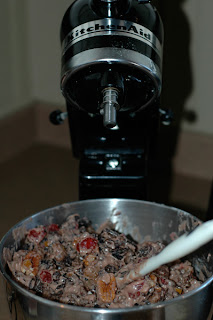 Here is the evil, vile batter, chock full of fruits and raisins and peel and pecans. And rum. I don't even like rum, but I think it's the best thing about fruitcake. 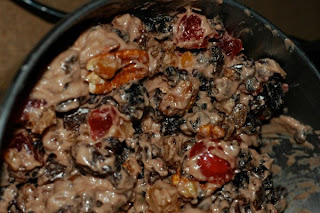 Eeeeeeeevil! Eeeeeeeeeevil! Look at those glistening candied cherries! Those revolting bits of candied pineapples! The noxious candied peel! And enough raisins to rot out a classroom-full of children's teeth! 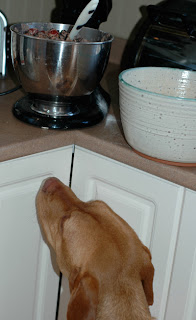 Tristan, who will eat anything (the dog eats cardboard toilet paper rolls and wild turkey poo, for God's sake), would just love to help rid the world of a bowl of fruitcake batter. Out of respect for Gordon's twisted love of fruitcake, I could not let this happen.

The cake took three hours or so to bake, and I was so eager to get it out of my sight that I forgot to photograph the finished product. It is now wrapped in rum-soaked cheesecloth, awaiting Christmas. I should have made it months ago so it could ripen properly, but Gordon claims not to mind devouring a young fruitcake. And so I will release the beast (the fruitcake, not Gordon) at Christmas.

Incidentally, it's snowing again, and some large storm is supposed to whack us Friday. I see snow in the forecast for Sunday, too. White Christmas, anyone? Remind me again why I live in Canada, so close to frigid Ottawa and icy Montréal?

Twelve things you didn't know you could do with a fruitcake

In bowl, combine chocolate and sour cream. Stir in the chocolate crumbs, mix well. Cover and refrigerate until firm, about 1 hour. Roll scant tablespoonfuls of chocolate mixture into small balls slightly pointed at one end. Roll lightly in icing sugar or chocolate wafer crumbs. Place on waxed paper. For each mouse, insert dragees for eyes, almond slivers for ears and small bits of licorice for the tails. Refrigerate until firm about 2 hours. (Truffles may be stored in an airtight container in the fridge for up to two weeks.)

Yield: two dozen
Posted by Knatolee at 8:16 am