There has been more than just cow excitement here lately... 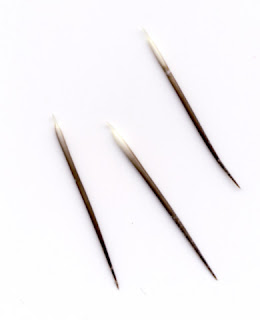 My souvenirs from Saturday evening.

On Saturday evening, Tristan met a juvenile porcupine in the field of soybeans right by our garage. The porcupine left a calling card, or rather, about 20 calling cards.

Gordon was mowing the lawn and I was playing with the dogs, who kept running in and out of the soybeans. The plants are so tall now that you can't even see the dogs when they are in there, and I do my best to keep them out, period, so that they aren't damaging the crop.

But this time, after I called them out, the two dogs went dashing back in. Sophie was sproinging around like a superball, something she does when hunting meadow voles, and Tristan was barking. "Hmm," I thought, "How interesting. Tristan almost never barks! What's up?"

I called them again, and shortly thereafter, Tristan burst out of the field, stopping to paw frantically at his face. With a sinking feeling, I ran over and as I feared, he'd been quilled. Little pointy needles were impaling his delicate, velvety skin, giving him a hedgehog-esque appearance. He had them just under his nose, (in the split!) and in his lower lips and lower front gums. Obviously he had tried to taste the porcupine and had gotten a nasty surprise.

I flagged Gordon down off the lawnmower, and while I calmed our frantic dog, G called the emergency vet. Thirty minutes later, we watched our dog slowly succumb to heavy sedation. The vet then went to work extracting quills, which took more force than I would have imagined. Luckily Tristan was in la-la land, as it all looked quite nasty and bloody. Some of the quills had completely penetrated the upper lip area and ended up inside his mouth.

The vet commented that it had likely been a young porkie, as the quills were quite short. He told us that Tristan's case wasn't bad at all; he had before seen up to 1,000 quills in a dog!

While we waited for Tristan to come out of his sedation, we had a nice chat with the vet and got some good restaurant recommendations. I also asked the vet about the weirdest things he had ever extracted from a dog (for our vet in Nova Scotia, it was a cactus that had been eaten by a clearly insane Basenji!) He said he once extracted a dart from the heart of a dog, during a postmortem (sadly, yes, the dart had killed the dog.) He also said that he once had a patient that had eaten a popcorn Christmas garland made with pins, and that FIFTY pins had passed through the dogs without harm, no surgery necessary!

Finally our groggy goofball got to his feet and we drove him home. I took the quills with me as souvenirs. I am quite proud that I had resisted the urge to photograph Tristan for the blog before taking him to the vet, choosing instead to comfort him in his hour of pain. But it was close; it took all my strength not to run for the camera.

It is to hope that in the future Tristan will avoid all things quilled, but I'm not holding my breath. Meanwhile, he acquired the nickname "Pincushion."
Posted by Knatolee at 9:38 am