So I came back from walking the dogs on Tuesday to find this note on the door: 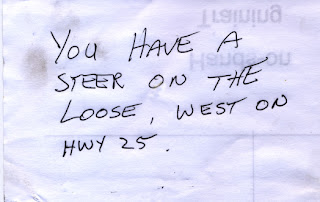 Um, steer? The closest thing I have to a steer is the organic hamburger in our freezer, left over from our BBQ party two weeks ago.

There was a phone number on the note, so I gave it a call. It was a fellow who runs an agricultural business down the road. Apparently some woman had run into his shop looking petrified, crying that there was a giant black BULL in the middle of the road. The fellow decided to try to figure out who owned the steer, and because our farm is called "Big Angus McDonald" farm, he thought perhaps the black angus cow in question might be ours. Alas, no. Or perhaps, fortunately, no.

My hubby called the local police to say there was a cow on the loose, but a squad car had already been sent out from our local OPP (Ontario Provincial Police) detachment.

Perhaps more alarming than the note was what was on the back side of it: 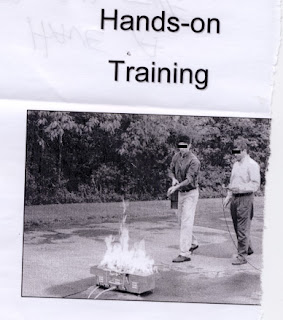 Uhhh... just what is on fire there?

I should mention, the escapee cow thing has been an ongoing concern for the past week or so. REcently I was walking the dogs down the path (known as the cow lane, actually, from the time that there were cows being kept on this farm) that runs through our property to the river at the back. All of a sudden I stumbled across this: 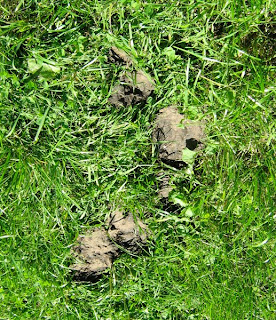 Yes, a cowpat drying in the sun. And at that very moment, there was a terribly loud MOOOOO erupted one of the cows next door. Evidently our dog Tristan has a phobia about cows, because all of a sudden he was nowhere to be seen. Finally I could pick him out on the hill next to our barn, where he had run in a panic. Nothing I did persuaded him to return, and in fact, I have been unable to walk him on the path since this happened. We are currently trying to lure him back with gentle therapy! He needs his walkies.

Anyway, we don't have cows, so clearly some cow had escaped and taken a fertilizing dump on our land. Hmmmm.

The next day, I let the dogs out and Sophie began barking maniacally. And there they were, two large black cows and a calf, grazing off in our soybean fields! I called my husband at work and the search for the cow owner began, but none of our neighbours seemed to know who owned the herd of black cows (and one llama) on the vacant pasture land next to us.

Then yesterday morning, Gordon saw FIVE cows in our fields. He decided to call Dave, the farmer renting our land, to let him know what was going on, and that we were trying to find the owner of these beasts. Not long after, a large, shiny pick-up truck pulled up our laneway. As it turns out, a nice guy named Aurele owns the herd, and he and his friend Rejean had arrived to figure out how the cows were escaping. Five minutes after Gordon called Dave and left a message, Dave, who knew who owned these soybean-munching bovines, called Aurele, and Aurele came zooming over.

So it is to hope that the cow mystery is solved, and that Tristan will soon be able to walk the fields again free of fear. And we'll see what other notes turn up on my front door in the future!
Posted by Knatolee at 9:11 am