This could become addictive 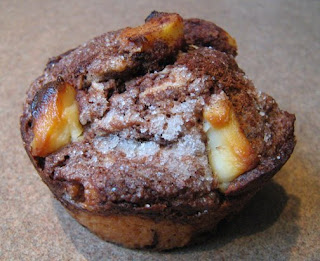 Okay, well, first off, I've found my own personal crack: the chocolate/cinnamon/cream cheese muffins Gordon made the other night, from 500 Muffin Recipes by Esther Brody. I can't stop eating them. Somebody help me. Please. 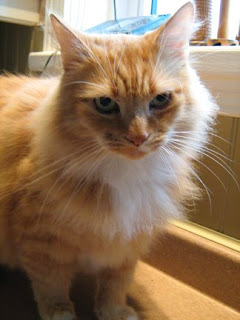 Julius is ticked because I took away the muffin. He loves the smell of chocolate and doesn't believe me when I tell him chocolate is very bad for kitties! Sorry buddy.
And I think I may be developing a new addiction: auctions. Having never been before, except to a Mennonite quilt auction back in 1996, I have now gone to three in as many weeks. Gordon is becoming even more of an addict than me. I believe he is already going through withdrawal, since it has been six days since his last auction. "Hi, my name is Gordon and I'm an auction-aholic. It has been six days since I lasted attempted to buy a broken palm sander for ten bucks. "

There are a LOT of auctions in the countryside, and you can get some amazing deals. There are a couple of great ones tomorrow that we can't go to (prior commitment), which is just as well since we lately blew a ridiculous wad on a Bush Hog zero-turn mower for the farm, with dump cart and seed spreader, and have no spare cash. Still, they are selling all sorts of goodies tomorrow: a 1969 VW Bug, the exact Honda 5500 generator we want for the farm, violins, a karaoke machine, a pontoon boat, a snowblower and my personal favourite: SCRAP MEAT. I cannot fathom it... I don't want to fathom it.

Another auction is selling, I kid you not, a "professional pig roasting machine" that "can cook two pigs at one time -- one on each side!" JUST imagine! Who wouldn't need one of those?

Or I could go to an auction tonight and pick up a dehorner and hoof trimmers, not to mention a hospital bed and some large rope pulleys.

Speaking of beds, two of the three auctions we attended featured those Craftmatic adjustable beds. And people gladly bought them, albeit for a fraction of the price advertised in those horrific daytime TV commercials.

At an auction two weeks ago, I watched in awe as my normally restrained husband bought a milk crate full of extension cords, a set of socket wrenches, a harness thingy that enables you to climb your tower aerial safely (I'm not even going to BEGIN to visualize this, Gordon scaling the aerial like a mountain frigging climber!), two plastic gas cans, and a few other things I daren't remember. All that for a mere $169.00, which includes the wicker chair I bought and intend to paint and put on the front porch with my other wicker furniture. I also got an awesome box of books for six bucks.

Think of what we could pick up tomorrow... a full skid of various size nuts and bolts... cattle handling equipment... peacocks... a flux welding Meg 105F1 (huh?)... a Royal Oak teapot... two compressors/nebulizers for asthma (oops, did the asthmatic kick off?)... a slow vehicle sign... a large assortment of 50-lb boxes of nails... a painting possibly done by Gainsborough... why, the possibilities are ENDLESS!

And I already have a favourite auctioneer: Hélène Faubert! Bilingual AND hilarious and she really keeps things rolling. Who could ask for more?

Well, I supposed I COULD ask for scrap meat. But I won't.
Posted by Knatolee at 5:39 pm