At last, decent fish and chips...

Fish and chips, DECENT fish and chips, are very important to me. And they are so damn hard to find in Canada, especially, it seems, if you're not near a major city. Sure, you can find some sort of fish and chips pretty well anywhere here; I can get complete and utter crap F & C just up the road in Alexandria (Ontario, not Greece, although I'm sure the one here is actually named after the Alexandria in Scotland. I think we live in the most Scottish part of Canada!) But I refuse to ingest complete and utter crap fish and chips! If I am going to clog my arteries, I am going to bloody well do it right.

Living out here in farm land, with major cities a good hour away (and if there are decent fish and chips in Ottawa or Montreal, I have yet to find them), I had little hope of succeeding in my Fish & Chip Quest. I mean, if you walk into a fish and chip shop and they don't even have malt vinegar on the table, you know you are in trouble. Usually these establishments offer horrific, previously-frozen, tasteless chips (that's "French Fries" for the Americans amongst you) and a slab of dubious fish crusted in a thick, grease-sodden bread-like skin. Urgh. That is not fish and chips. That is CRAP. CRAPCRAPCRAP!

But a few months back, I spied in nearby Cornwall (sadly, not anywhere near as gorgeous as Cornwall, England, but the St. Lawrence river is pretty) a little hole-in-the-wall restaurant tucked away near the useless shopping mall. A sign out front boasted something about real English fish and chips. I noticed they also had steak and kidney pie and various other typically English things on the menu. I was highly dubious but figured hey, let's try it sometime.

And yesterday, we did. The restaurant is smallish and unassuming, with the deep-fat fryers in plain view. The walls are covered with British bric-a-brac: framed tea towels, Guinness posters, the front page of a newspaper announcing the death of George VI. The quirky decor heartened me. I have never had good fish and chips in a chi-chi poo-poo well-decorated establishment.

I was further pleased to see that the menu offered not just one fish variety, but several: cod, haddock, halibut and Alaskan whitefish. Gordon and I sat down at a comfy corner table and each ordered halibut and chips. I have a thing for halibut, and the best halibut fish and chips I ever had were in Alaska, of all place. But they do fish halibut there, so it was understandable.

The server, who turned out to be the owner (and son of the original owners, all from Leeds; they came to Canada 25 years ago), brought Gordon a great coffee and me a very decent pot of tea. Drinkable tea is something else I find almost impossible to get in Canadian restaurants outside Atlantic Canada. Note to restauranteurs: you do not serve good tea by placing in front of your guest a pot of lukewarm water with a bag ON THE SIDE!! My father is rolling in his grave! But I digress. Back to lunch.

The fish and chips arrived promptly and they were... GREAT! The chips were amazingly not crap. I could still see bits of potato skin here and there, like a human being had peeled them instead of potato-killing machine. The halibut was delectable, with a delicious thin batter that had not absorbed every lost splotch of grease in the vat. It was light and crispy and allowed the tasty fish flavour to shine through.

And the coleslaw! Finally, the creamy yummy coleslaw of my childhood fish and chip experiences. You absolutely must have coleslaw with your fish and chips. It does a smashing job of cutting the grease, and is a suitable substitute for mushy peas, which most Canadians (and my American friend Phyllis) regard with the utmost suspicion. And to its credit, this wonderful Cornwall establishment does indeed offer mushy peas on its menu. Maybe next time. Or maybe never.

So my heart sings once again, even as my arteries cry out, "No! No!! NOOOOOO!!" For I have found a great fish and chip place: "Ye Old English Fish 'n Chip Shop". We will be back. Soon. 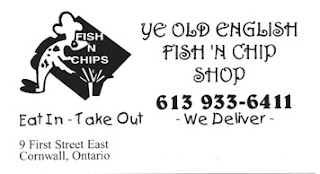 And on a related note, my Uncle Kevin in England, who is not only my godfather but my favourite family member, shares my love of fish and chips. When we were in Bourton-on-the-water in the Cotswolds, we had taken a packed lunch and thus were not able to have a full F & C meal, but we did stop for some glorious, hot fresh chips. "Hot" is very important. Very.

Here we are, showing the photographer Phyllis D. (aforementioned American friend) why life is really worth living. By the way, Kevin doesn't have cataracts, nor does he have such poor taste in eyewear. I don't like posting people's photos here without permission (with the exception of American Phyllis, whom I enjoy offending, and also that guy from Wisconsin with the infamous butt crack), so I crudely Photoshopped on a pair of sunglasses. Uncle Kevin is away in NZ right now, otherwise I would just ask him if I could put his pic up. I'm sure the sunglasses completely obscure his identity: 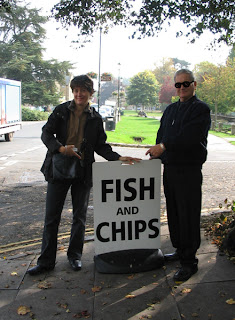 And further proof that I have the coolest Uncle in the universe (again, the eyewear below was not of his choosing): Uncle Kevin had a very good job in the insurance industry and took a reasonably early retirement. But last year, he found a part-time job to keep himself amused: he drives a fish-and-chip van! (Good grief, you can find ANYTHING on Wikipedia. And who knew some vans serve SPAM FRITTERS?! That is just wrong.) He drives the van and takes the money while the owners do the cooking. The day he drove Phyllis and me to the train station, he was suited up for his Fish and Chip tour of duty, although he refused to wear his really cute matching hat for the photo. Party pooper: 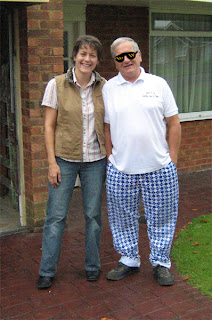 His grandchildren think he has the most magnificent job in the universe! So do I.