I got this recipe from Dephal: 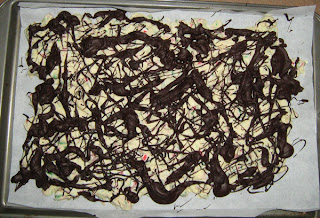 Peppermint (candy cane) bark! I didn't use enough white chocolate, and I didn't spread it quite thinly enough, but it is pretty tasty. I think Dephal's young daughter does a better job on this bark than me. :)

The frustrating thing was that on Thursday night, I could not find any normal candy canes in the stores! Usually you are choking on the damn things at this time of year, but all I could find were hideous flavoured ones. Who wants an "Orange crush" or grape soda candy cane!? BLECH!!!! I was about ready to steal handfuls of freebies from a restaurant counter, but then...

...I found these candy cane "trees", which at least had real peppermint oil in them, instead of fake peppermint flavour: 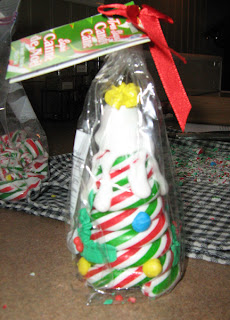 I knew that not only was I going to have to smash them up, but I was going to have to get those STUPID icing decorations off as well. No one wants bits of yellow and blue in her peppermint bark! Very off-putting indeed.

For the task of smashing, I chose my Mum's rolling pin. I inherited it (along with an English Setter and various other things) when she died in 1997. I can't remember a time when she didn't have it: 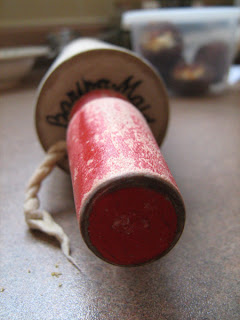 The funny thing is, it's apparently vintage! I did a web search and found a few for sale, but sadly they are not worth thousands of dollars.

I think my Mum must have put the string on it so she could hang it on a hook. Even though it is occasionally annoying, I refuse to remove it.

It did an admirable job of smashing the stupid candy cane trees, although the whole process did leave some tiny dents in my rolling pin. OOOOPS! 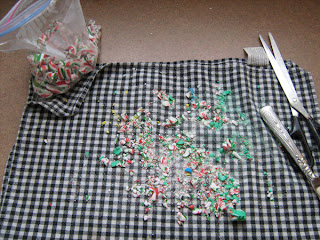 So the peppermint bark was a success, easy, and fun. A good way to let off some steam, smashing candy.

Next I made mincemeat tarts: 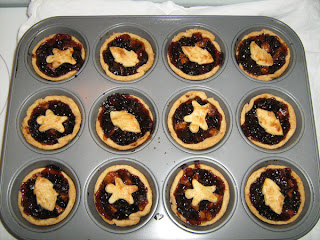 Do Americans eat mincemeat? My English parents made mince tarts or pie every Christmas. Even after my parents split up, my Dad baked his own, so I'd get two sets of mincemeat goodies each year! When I was 12, my Mum and I actually made and bottled mincemeat, which I would like to do again some day. It was so good. I don't think we put suet in it; I'm not really a big suet fan.

For this batch, I bought a jar of Crosse and Blackwell Mincemeat with Rum & Brandy. Not homemade, but a family favourite. I then added a bit more rum
Posted by Knatolee at 8:00 am