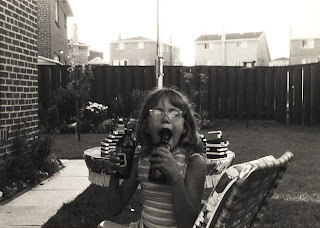 Guess who! Why yes, it's me, the amazing BEER CHILD, c. 1971, or possibly 1972. Nothing like throwing back a few Carling Black Label in stubbies while you're working on a tough Lego project! (I adored Lego.) And isn't 1970s treeless brick-box suburban Toronto (Agincourt) ENCHANTING? (she says with immense sarcasm!) Do you wonder why I've been wanting to live in the country since I was a kid?

Now, before you go thinking that my parents were total reprobates who let their kid guzzle booze, let me just say that it was my PARENTS doing the guzzling (hey, hot Canadian summer = beer!) and the bottles I'm holding in the photo were empty. Mostly. And besides, I have NEVER needed to get drunk to act crazy. Anyone who knows me well knows that. Although Ishould mentioned that my mother loved to tell me that when I was a baby, I once cried for sixteen hours straight, and when my mother had given up and run screaming from the room, my paternal grandfather gave me a little whisky in my bottle, which put me immediately to sleep. Did I mention this was the 70s? Oh yeah, my parents chain-smoked around me all the time, too, so I can't see much harm in a wee dram of whisky.

Truth be told, I have always been a pathetically lightweight drinker, one 1990 evening involving six shooters aside (thanks, Gordon!) For some reason, I could hold my shooters without an ensuing hangover. My two adventures in tequila (thanks, Gordon!), while great fun at the time, left me with one hangover from hell that ended my exceedingly brief drinking career (which encompassed a few incidents in the early 90s.) I still can't smell tequila without wanting to toss my cookies.

ANYWAY! I ascribe my lack o' interest in alcohol (the odd Guinness or Kilkenny cream ale aside) to the fact that alcohol never held any mystique for me. I never even LIKED beer until I was in my 30s. My parents let me taste beer and all that when I was a kid, and I thought it was revolting! I also thought that certain of my relatives who got habitually drunk acted like total idiots when they did so (disclaimer: some people are fun drunks, and I have no real issues with anyone indulging in occasional drunkeness!), so I decided that I was not particularly interested in tossing 'em back and thus performing great acts of stupidity on the public stage.

Oh yeah, if you're wondering why my skin looks so dark in that photo, it's because kids were encouraged to tan in the 70s (healthy glow!) and also because I tan very easily. I have been told that there is Indian (as in "Asia") blood in my veins, resulting from a certain familial romantic incident back in the days when the sun never set on the British empire. On the other hand, my mother loved to tell me we were direct descendants of Anne Boleyn, so it's hard to know what to believe. I do use more sunscreen these days.

Must go wash some floors...