And then there were three... 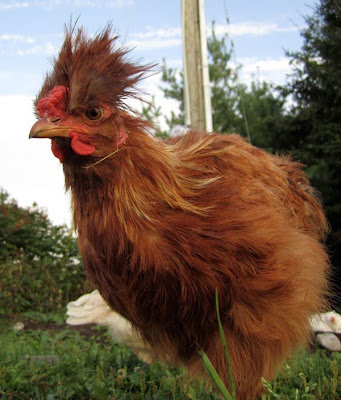 ...is a man! He crowed at me four times this morning.

Time for another name change! We switched "Lady Gaga" to "Lord Gaga" (when we discovered that hen was a rooster) but I'm thinking I'd like something completely different for Mr. Diller here. I could go with just Phill but somehow it doesn't suit him, plus I have a friend named Phill who is less than impressed at the thought of having a Silkie rooster named after him.

I've also been calling him "Kitten", which doesn't suit him either. That started up because he's part Silkie, and the guy who sold us our seven freak-show chickens said that Silkies are great with kids because they are gentle and don't mind handling. "They're like kittens!" he said.

Three roosters! The hens aren't going to know what to do with themselves when the young'uns move into the coop...