My friend lent me a chicken tractor and the little ones love it. The roof is a little leaky, so I've got a tarp over it as it's supposed to rain today (and yes, our lawn is sorely overdue for mowing. Gordon claims he will be attending to that tomorrow morning!) The kids are only outside in daytime. At night they sleep in a big box in the garage.

Here they are enjoying a little rest! 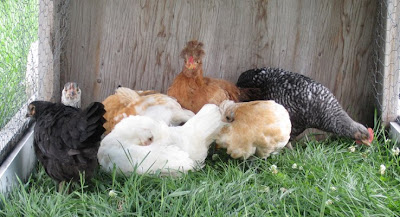 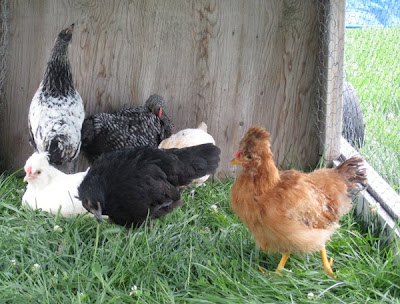 We named the brown one on the right "Phyllis Diller" but I have strong suspicions that Phyllis is actually "Phill." Do any chicken people out there have an opinion? It's okay if he is a cockerel! 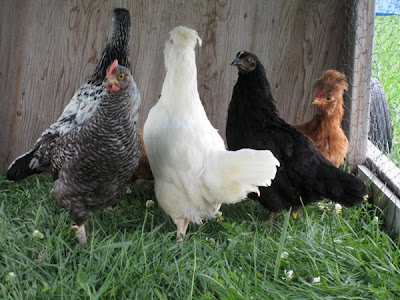 Errol Flynn is the confirmed cockerel on the left. That's Tina Turner (the white one) next to him. The black one lacks a name. I'm calling the black/grey/white one in the rear The Pigeonator, but Gordon wants another name. We may have to arm wrestle over that. Didn't one of my commenters come up with the name? The little brown one (hidden in this shot) is Buttercup II, and the other mop-head (also hidden) will lay blue eggs and is Georgiana, Duchess of Devonshire, but I think I already mentioned all that in a previous post!

So what do you think? Is Phyllis really PHILL?!