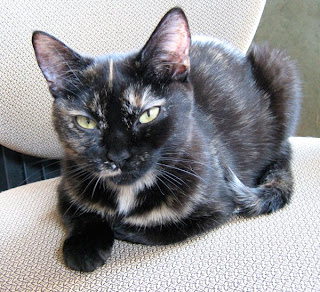 She weighs a shade over five pounds. She's the prettiest cat I have ever had, with the nicest temperament of any cat I've ever known. She's a ray of sunshine every single day. 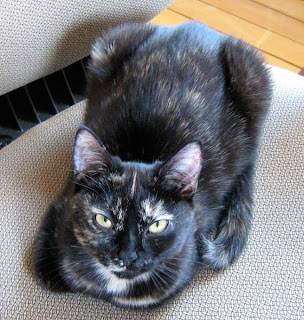 Here she is in the classic "cat brick" pose. 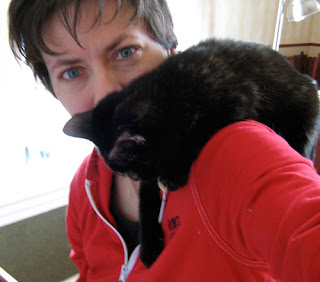 She looooves to hang on your shoulder. Good thing she doesn't weigh much! She purrs in my ear the whole time.

(Oh my God, every time I see that damn wallpaper book-border in my photos, I want to scream. We are hoping to get going with the redecorating for real this spring. Wallpaper MUST DIE. I. hate. it!!!!)


Off to take the large, imperfect dogs for a walk. Yesterday they decided to go swimming in the creek, even though it was below freezing and snowing outside. Then they refused to come when I called them (rare) because GOSH DARN IT! there are so many good things to smell after a thaw and HEY! is that a muskrat in the creek? I bet we could catch it and kill it and WOAH! coyote poop, let's ROLL in it and WOW! Do I catch a whiff of skunk on the air? and HELL YEAH! ...meadow voles under the snow!! Let's try to dig them out until Sophie's nose is raw.

Tristan still smells from his most recent skunking. I think he refreshes himself by rolling where the skunk sprayed in the barn.
Posted by Knatolee at 1:10 pm