Yep, new arrivals on their way!

...but first, let me satisfy you cat-fans out there!
Annuk was helping Gordon read the news on his iPhone last night... 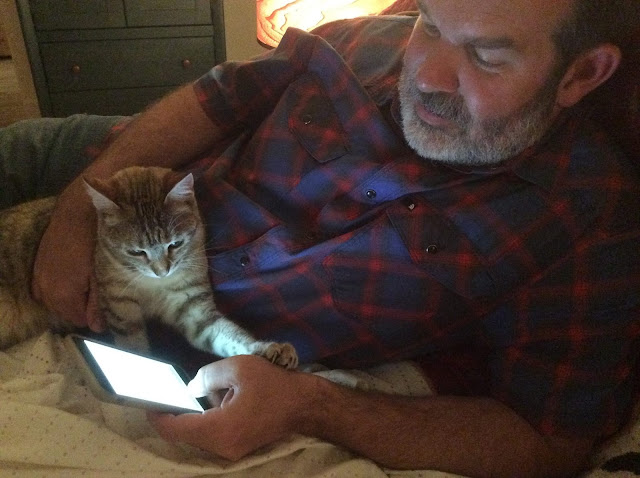 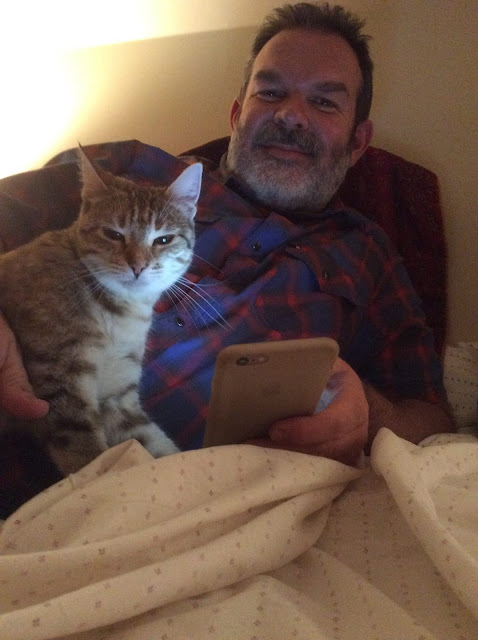 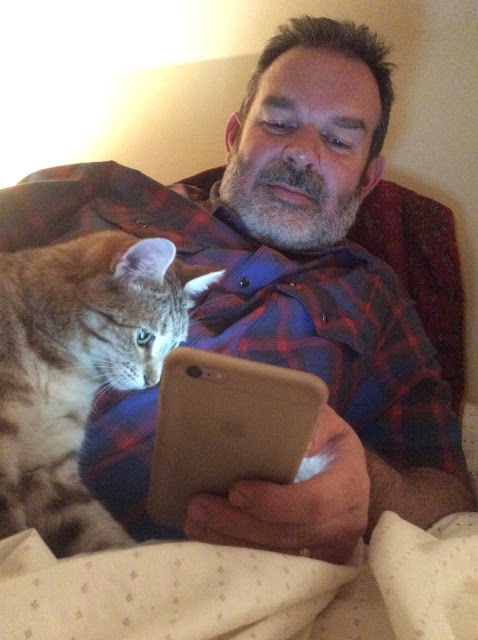 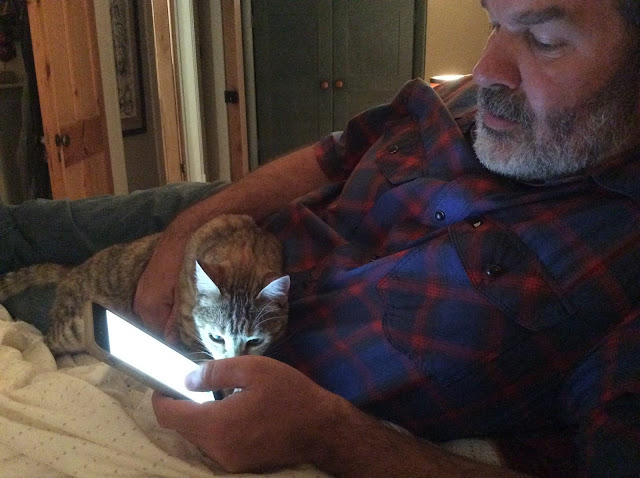 She is such a tiny, wild thing. You may recall she is one of four siblings I brought home from Syros, Greece in April 2015. I managed to adopt out two of those cats, but Archie and Annuk have stayed. Annuk took a while to get cuddly! She runs around meowing like a maniac sometimes, the most pitiful "I haven't eaten for weeks!" kind of sound. She's incredibly lithe and fast, and I love her markings. I'm really glad she stayed.

Meanwhile, our horses should be moving home by the end of this month. 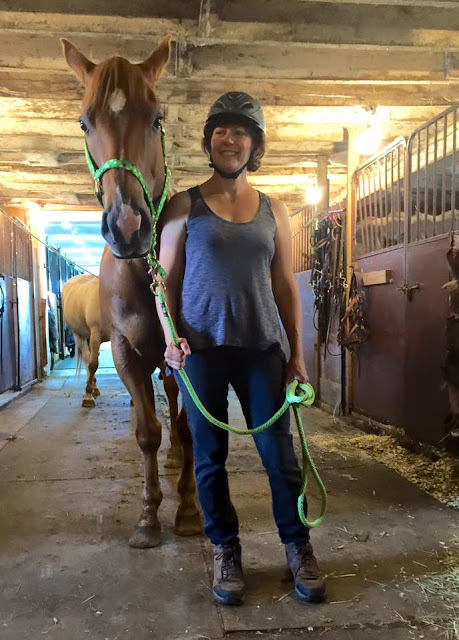 This is me and my boyfriend Roo. :) 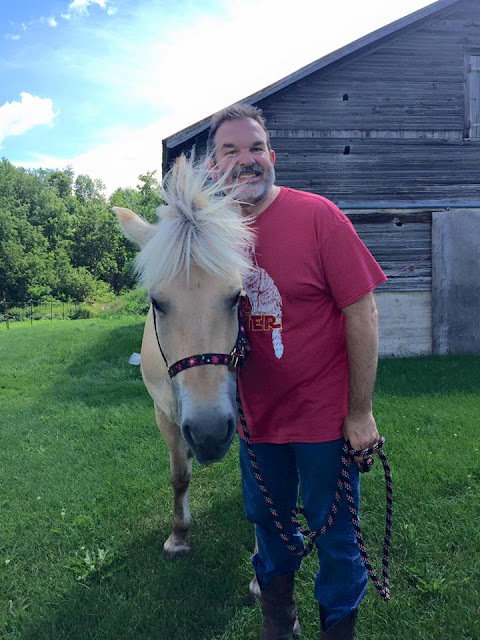 And Gordon and the "other woman" Sandy. We've both been getting much better at cantering in our lessons, and last night was a first. After we finished our lesson in the covered  sand ring, our instructor let us go out and ride down to the end of the road and back on our own! This was a huge thing as there was a time when I thought I'd never have the confidence to ride without a guide or instructor. But it all went just fine last night. I have really developed a good seat for riding and have progressed quite a bit this year, as has Gordon. It's pretty exciting. I even accidentally did a tiny jump with Roo a couple of weeks ago... we were supposed to be trotting over some raised polls but instead he did a jump. And I was just fine, not even a scream.

Last night he tripped while I was cantering and I didn't even blink. I remember a time when I wondered how I would ever know how to put on a saddle and bridle by myself!  We are really looking forward to having the horses at home. We will be borrowing a friend's trailer to take them to lessons every week. Our new sand ring here is nearly finished and will be a ton of fun to ride in.

And we are getting some new additions this weekend, including this two Runner-duck crosses: 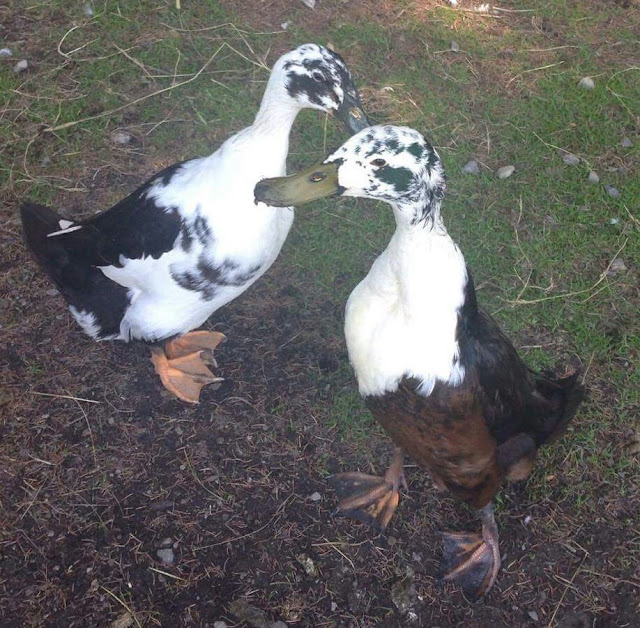 And on Sunday, we are taking in a pig named Patrick and a 6-week old goat kid, both from the animal shelter in Sherbrooke, Quebec. We were nearly going to take in two goat kids, but one of them sadly died yesterday. The pair of kids were dumped at the shelter when one was a day old, and the other a week old. The little one still had his umbilical cord, and they were both in very poor shape. The wonderful vet at the shelter took them home and fostered them, and managed to restore them to good health, but for some reason the little one passed away yesterday. Given all the challenges he had to overcome, it's not entirely surprising. Among other things, the foster goat mama wouldn't let him nurse, but did allow the older kid to do so.

So what I really wish is that I could find another goat kid in need of adoption to keep this new little one company, because he is too small right now to put out with the big goats. I'm working out what to do.

And the pig is a sweet little 1-year-old pot-belly. He was taken home by one of the shelter's volunteers and has been there for a year. She approached me last year about adopting but we were about to take in Henry at the time and I couldn't manage it. Patrick has been shunned by her other three pigs, so she asked me again if I would take him, since she is also bringing us the little goat kid. So we said yes! We're hoping he'll fit in better here with a bigger herd and more space. I'm kind of hoping Henry will befriend him but we'll see.  Pictures to follow!


And here's Alex looking very proud of himself for scoring a spot on the forbidden guest bed... 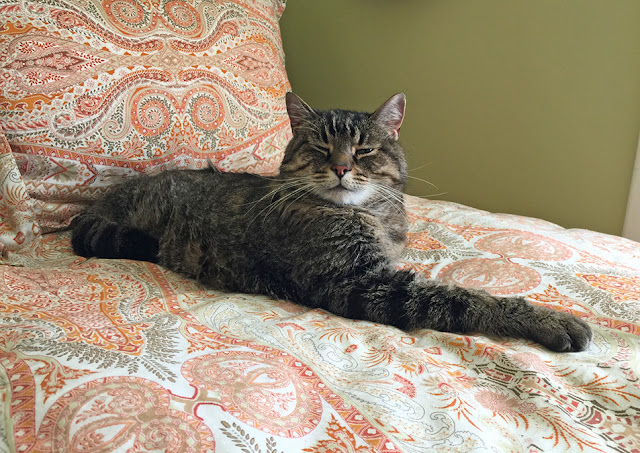 And here is out lovely donkey Saul... 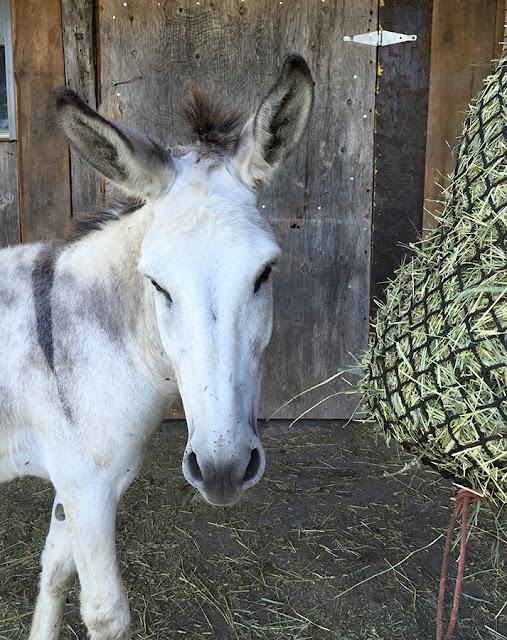 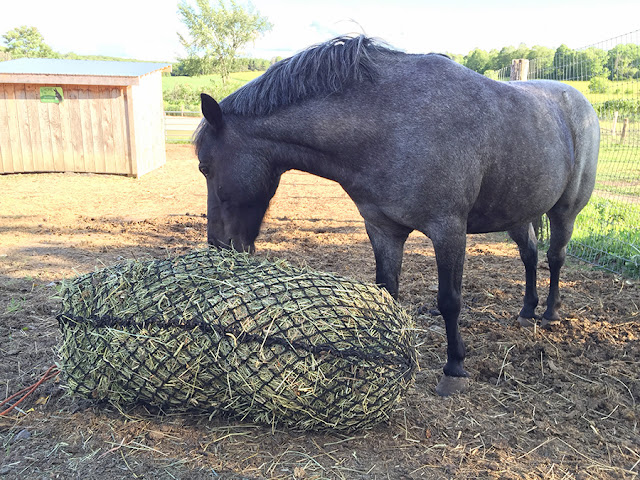 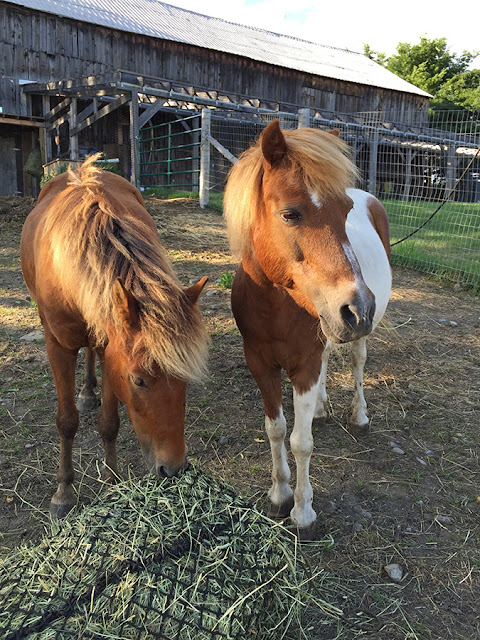 Jimmy has really fit in spectacularly well. I'm surprised at how easy his integration was. He really is a lovely little pony. He came with a cart and saddle and supposedly is broke to ride and drive. Once the sand ring is finished, we'll hook him up to the cart and see how he does. He is still packing some extra weight (as is Finney, oops!) so he could do with regular exercise.

And here's a hollyhock from our garden... 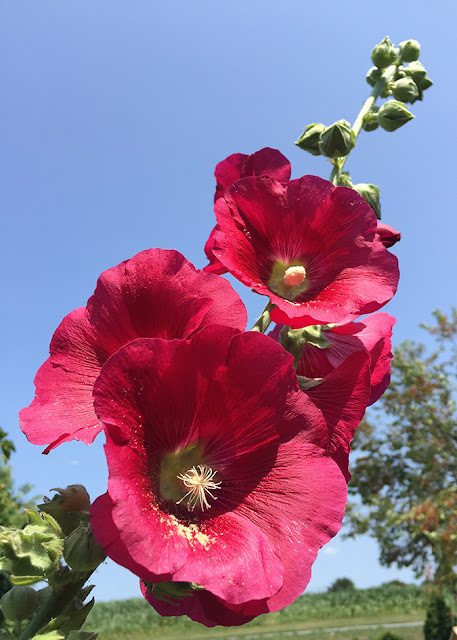 That's all for now. Enjoy your Thursday!

PS If you want to learn a bit about Pip and Mootie, two cats we adopted in October 2014, check out this old post from my friend Deb's blog. I never guessed at the time that before long, these two cats would join our family!