T is for TROUBLE

I have a begging cat.

Okay, okay, I admit it. I created this situation myself by giving in to the cuteness that is Emily. She is now obsessed with whatever I eat for breakfast! I don't feed our dogs from the table or give them a lot of treats, but I do share the crust from my toast every morning. I don't recall how this started! I have toast with cashew or peanut butter with tea when I first get up. A little later, I have fruit and yogurt and granola, or cereal or oatmeal or whatever. I always eat breakfast in two shifts. I'm one of those people who like to graze all day.

The dogs know that I have toast as soon as I get up, but they are often outside performing their ablutions when I start eating. As soon as they are let back in, the frantically race to whatever room I'm in and sit quietly next to me, rigid with anticipation, waiting for me to give them each a bit of crust. They are quite polite about it so I don't mind. Occasionally Gordon will whisk away my plate and dump the crusts without me noticing. You can see the bitter disappointment in the dogs' eyes when this happens!

Emily is less polite. Emily is out of control. And Emily would like you to know that she MUCH prefers cashew butter to peanut butter! Now, every morning I have two dogs drooling next to me and a cat directly looming in front of me, either on my desk or on my chest if I'm having tea and toast in bed (thank you, Gordon darling!) But Emily doesn't sit quietly like the dogs. She sticks her nose in my toast. She reaches out and tries to bat it off the plate. She tries to grab it out of my hand. She occasionally steps on the plate. She is obsessed. I push her away until she backs off, but then of course her cuteness gets to me. Those sad little eyes! I offer her a little dab of cashew butter on my finger. Licklicklicklicketylickylick!
Who knew cats were into cashew butter?

And at the end, I save her  a tiny piece of crust, because she also loves BREAD.  I only give her a wee piece, because I don't think bread is a particularly healthy cat treat!

Nowadays she's showing up for my second breakfast shift as well. She's decided that it's just awesome to lick out the bowl after I've finished my yogurt or cereal. 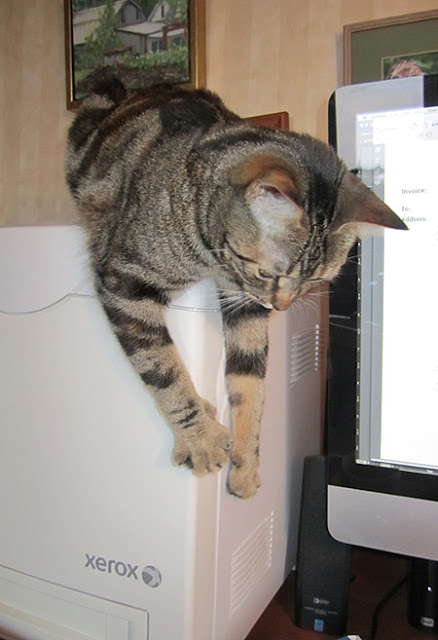 "I spy with my little eye SOMETHING THAT'S DELICIOUS!!" 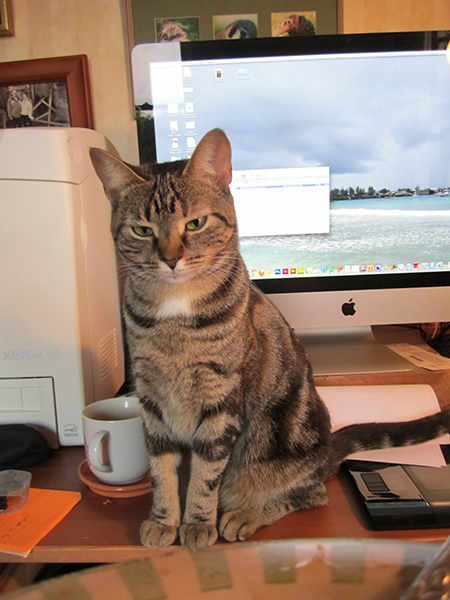 "You need to give me that bowl RIGHT NOW!" 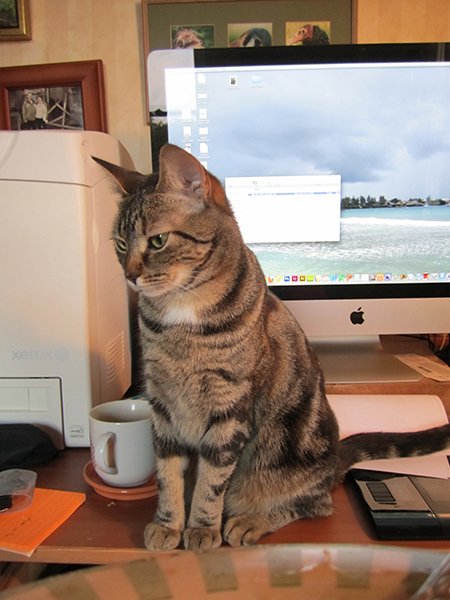 "I give you 30 seconds. After that, I'm gonna flip that bowl right out of your hands!"