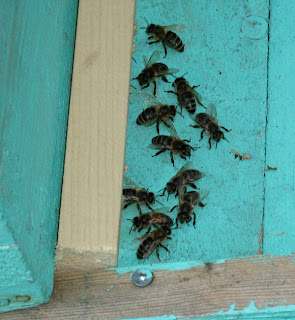 Some of my beautiful girls at the entrance to one of the hives.

Yes, I am now a beekeeper. I hope I do not become a bee murderer, by screwing up and doing something stupid. But so far, so good.

The girls arrived in their nuc boxes Tuesday night. The "beeyard" is a bit under a kilometre from our house, in a sheltered nook at the entrance to our woodlot, near a pond (they need a water source nearby.) We can't drive our puny cars back there, but we can take a 4WD vehicle. Come honey harvest time, we'll be borrowing a friend's pick-up truck, since I will not be carrying a 90-lb box across a kilometre of fields.

Initially I figured I would put the nuc boxes in my garden wagon and take it across the fields, but I soon discovered that the shock absorbers, or lack thereof, on the garden wagon left much to be desired, and the bees were sounding awfully pissed off. Nothing like shaking up a box of bees to make life interesting!

So in the pitch dark, Gordon and put on our headlamps and walked across the fields (trying to walk between rows of soybeans so as not to crush the crops) each hugging a ten-pound box of annoyed, buzzing bees to our chests. Needless to say, we were extremely careful not to trip and fall.

Last Wednesday, in a stinking humid heatwave, I installed my honeybees in their two hives. It was going swimmingly until I realized, after painstakingly transferring four frames of bees (from the little nuc box my mini-colony arrived in) into the bottom deep (bottom box of hive) that the deep was upsidedown. This is what happens when you assemble beehives in the pitch dark by the light of headlamps at midnight.

It was then that I really started to sweat (although it was almost 90F that day and I was sweating anyway!) But I managed to take all the frames back out, flip the box, reinstall the frames, and then transfer the other colony to their hive. Nobody stung me, although they were getting a little annoyed at one point (because I was so slow and incompetent) and a couple of bees bounced themselves angrily off my (covered) head. But I got the girls in there, hopefully without killing a queen, and now I have two "Frankenstein" hives: 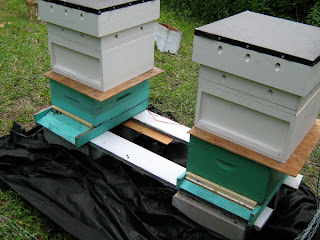 They are Frankenstein hives because Gordon ordered me some really cool D. E. hives without realizing that the frames of bees I was getting were built to fit a traditional Langstroth hive. So we got some Langstroth hive boxes off my octagenarian beekeeping buddy. (They are the green ones on the bottom.) With instructions from The Beeworks, who sold us the D. E. hives, we rigged up a transfer system. In three weeks, I'll remove the bottom deep, and put in another D. E. deep and the nice D. E. hive stand we have, hopefully without killing any bees or doing anything utterly stoopid.

The black fabric is landscape cloth to keep the weeds down. I need to put some mulch on top of it. I'm getting to it. I have much to do. My 5,000 sf vegetable garden needs my attention as well. ANd the chicks are arriving July 8th. Never a dull moment at the farm.

For now I am feeding my girls sugar syrup, to give them the extra boost they need to make honeycomb and build up the colony. Today I'm off to fill up the feeders, but I won't be doing my first hive inspection (pray for me!) until this Wednesday, which happens to be Canada Day. I'm hoping it won't be pouring rain as is currently predicted.

I still haven't recovered from this week, but I had a perfectly idyllic morning on Thursday. I went down by myself to check the hives, and ended up sitting on an upended bucket for half an hour, transfixed by my bee girls (and a few bee boys, aka drones.) It was perfectly wonderful sitting there in the early morning light, listening to the buzz of my bees and the singing of the birds, with a background chorus from the several varieties of frog that inhabit our pond. Ahhhh!

And on a final note, I have to say... this outfit is NOT flattering to the female figure. But it sure beats being stung.
Posted by Knatolee at 11:34 am