Many moons ago (over two decades) I was in a relationship with a mean, moody person who treated me like crap and tried to crush my spirit completely. He failed at his task. Two good things came out of it all (apart from the incredibly good decision to dump the bastard before he succeeded in the spirit-crushing): I figured out that I deserved a lot better in a partner (and found it in my Gordon), and I discovered the wonders of honeybees. The mean, moody person's father was actually quite nice, and he kept bees. From the time he first opened up a hive and showed me what was going on in there, I was hooked. And now, a couple of decades later, one of my long-held dreams is coming true and I am going to keep bees myself.

I long ago lost my fear of bees. I do treat them with respect, of course, but I know enough about honeybees and their behaviour not to have a knee-jerk panic reaction whenever one flits by me. They are, on the whole, gentle creatures who just want to go about their business. (Bumblebees and mason bees are similarly calm; hornets and wasps are a whole kettle of venom!) It helps that I don't have any deadly bee allergies.

Likewise, I do not climb on a chair and scream when I see a mouse, nor do I flee in terror from snakes. I love just about everything in nature, with the exception of leeches, cockroaches, mosquitoes and blackflies (she says as she scratches several bleeding blackfly bites. #*&@$^#@ bastards.) Though I grudgingly give roaches credit for their nuclear survival prospects!

Back in 2002-2003, when we lived in Nova Scotia, I volunteer-taught a class on honeybees. The Museum of Natural History in Halifax has a working beehive, and once a week, my co-teacher and I would educate truly adorable schoolkids (kindergarten to grade three) about the miraculous honeybee. Here I am with the museum's three honeybee "dolls": the queen, the drone, and the worker bee: 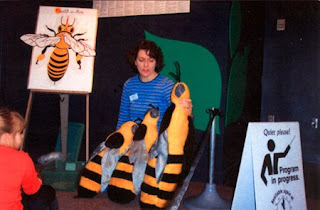 Sizewise, the queen is the biggest bee, the drone comes next (but he has the biggest eyes, all the better to find the queen with!), then the worker bee. A drone's sole task in life is to leave the hive, find the queen bee on her virginal flight and vigorously mate with her. Alas the, er, male bee genitalia remains implanted in the queen and the drone falls from the sky, quite dead (but oh, how happy he was before the end!) The queen returns to the hive, inseminated for life, never to leave again, ready to lay bazillions of eggs until the day she dies or is murdered by her workers or a rival queen. The ever-tidy worker bees carefully remove the veritable bouquet of prongy drone bits from the queen and groom her back to respectability. Yes, my friends, Miz Queen Bee is a floozy who mates many times over on her virgin flight, taking home a phallic souvenir from each of her unfortunate suitors.

No, I am not making this up, and no, we didn't mention these particular graphic details to the schoolkids.

At the end of summer, at least in northern climes, if there are any drones lazing about the hive they are summarily booted out by the workers bees and left to die before winter comes. I had previously thought that the drones were just sort of heaved out of the hive with a pat on the fuzzy backside, but I've been reading Susan Brackney's great little book, Plan Bee. Turns out it's more like the worker bees (all girls) tear the drones to bits and toss the pieces out the door, in an act of cold-blooded murder. Drone-icide!

When we used to teach the kids about drones, all the mothers would cheer when we told them about the lazy males being booted from the hive each fall.

Now, finally, I'm going to have my own hives and all I hope is that (a) I don't kill my "girls" through stupidity and (b) I don't ever develop a deadly allergy to bee venom! Gordon did most of the work putting my two new beehives together, but I did get involved to some extent. Here's what I need to work on assembling beehives: 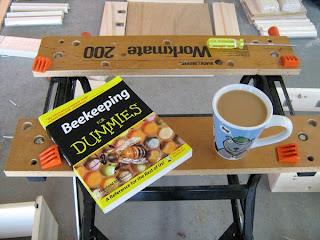 A Workmate bench, Beekeeping for Dummies and a good cup of Marks & Spencer Fair Trade Extra-strong tea. I'm good to go. For at least 20 minutes.
We took all the hive parts out of the boxes, and laid them out in two semi-neat rows: 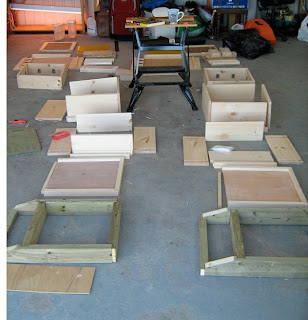 My oh my, there were certainly a whole LOT of pieces. At this point, I think I feigned a headache and fled the garage... 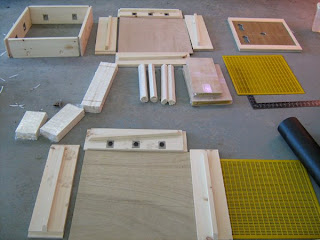 Ooo! And here is my shiny new smoker, which will not be shiny new for very long at all! 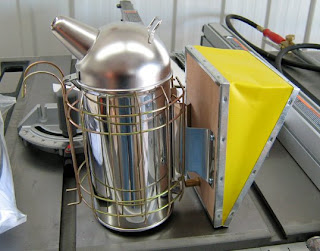 So I took some ibuprofen for the headache and actually managed a bit of hammering and assembling: 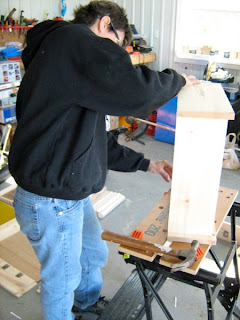 Gordon doesn't really trust me with a hammer, but my Dad taught me to use tools back when Gordon was still in diapers. I was an only child, so my Dad happily taught me all the things he would have taught a son.
Here I'm putting together the pressure-treated wood that forms the stand the hive sits on. Gordon makes me wear safety glasses when I hammer, which is very smart. As a kid, I just whacked away without eye protection. Ooops. But then, when I was little kid, they didn't have seatbelts in cars... 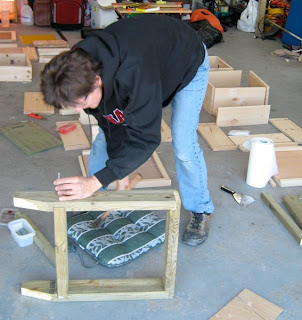 Sadly, I still have to assemble the 40 (FORTY!) frames that go inside the two hives. I am having small, quiet aneurysms over this, since my bees might be arriving within a week. Yeah, so instead of hammering, I'm writing a blog post.

These frames (pic below) are what the bees use to build honeycomb on. There is a foundation piece that goes in each frame that isn't pictured here. Later, some of that honeycomb will be filled with honey, and some of that will be stolen by me and eventually put into jars for honey-loving humans. But I will leave the girls enough so that they don't starve to death over the winter. 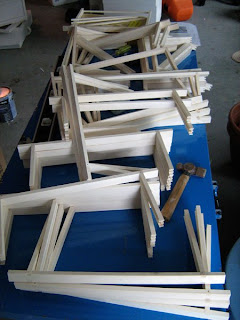 I am living in frame hell.
Bees also produce beeswax, propolis (sticky stuff made from tree sap) and royal jelly. They bring nectar and pollen back to the hive. The nectar becomes, ta daaa, honey. I could go on and on and no doubt will in the future, but I think my readers are sufficiently overloaded with bee info for today.

And here we have a hive, nicely stained white by Gordon. The bits are all assembled but it's not all stacked together properly. Gordon got me two D. E. Hives (as opposed to the traditional Langstroth hives) from The Beeworks. He did a bunch of research for me and they sound like superior hives, but we didn't take into account the fact that my "nucs" (my two queens and their attendants and a few frames of honeycomb, for two hives) will be arriving on Langstroth frames. Which are a different size from the D. E. frames. Ooops! Such amateurs! 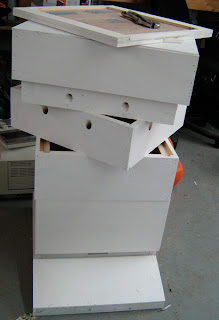 Never fear, there is a technique for transferring the bees from the Langstroth to the D. E. type. My octagenarian beekeeper friend gave me a couple of Langstroth hives. This year I will use parts of them to transfer the bees, then next year I'll add the hives to my beeyard, presuming my "girls" are successful this year and I'm ready to branch out by then. I think four hives is a very manageable goal. 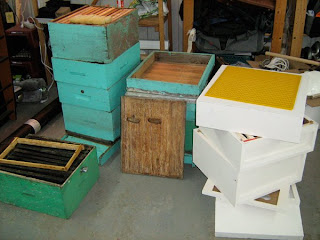 And here's the spot we have picked out for the bees. It is very sheltered and close to our pond, so there is a water source for the honeybees. It's about a kilometre back from our house, but you can drive a pick-up truck back there. Not that we have a pick-up truck, but that Bush Hog mower of Gordon's has a trailer, and that'll do for now. When it comes time to harvest honey, I suspect we'll be borrowing someone's pick-up and paying him off with honey. Supers (the "box" sections of the hives) get VERY heavy when they are loaded with the gold stuff.

We have dreams of planting ten acres of buckwheat for the bees one day, but we kinda need a tractor first. 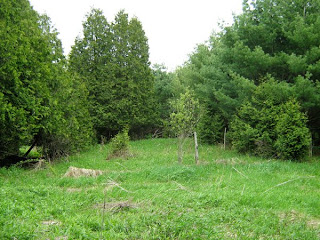 That's enough bee-babble for today. I have been killing myself for the past two weeks planting my 5,000 SF veggie garden: 42 tomato plants... what drug was I on when I thought that was a good idea? It would have been more if I hadn't given away eight plants and accidentally snapped three others in half! I've also been building hives, planting my herb garden, cleaning up the 16 perennial beds, and trying to get some meaningful work done. Yeah, we bought a farm with 16 perennial beds. What kind of madness is that? Who landscapes a FARM? I mean, I love gardening but wow, I am not worthy!! Nonetheless, I am up for the maintenance challenge. Even if it kills me. Maybe I'll make enough money from honey to pay someone to edge my @#$%#@&^$% perennial beds and pull weeds.

Meanwhile, Gordon is plugging away on the chicken coop and I will post pics of that tomorrow. Nighty-night!

PS: Did I mention the children's book I illustrated? Gee, I think I forgot to put that all over my blog. Surely you need to buy yourself fourteen copies! No, in fact I DON'T have any shame! ;) 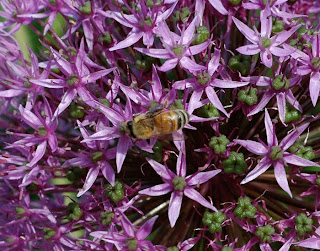