Men who weed-whack and the women who love them...

Sixteen years ago, I married a great guy. Kind, gentle, funny, patient, smart, brings me tea in bed every morning, rubs girly-lotions into my feet at night, loves animals even though he was brought up without pets and fell for a woman who would have eleventeen-hundred cats and dogs and chickens and squirrels without a husband to keep her in check, is helping me assemble 40 beehive frames... 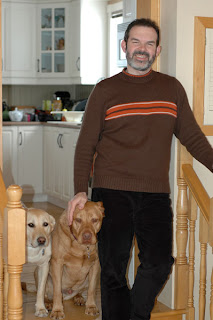 And is a great dog-daddy!

(Of course, he didn't get all that grey in his beard until he'd spent a few years married to me, but thatt's okay, because he's four years younger than me and the older Gordon looks, the better I look by comparison! I am aging him faster than he is aging me.)
G is very tolerant. He let me put a skirt on him and take his picture, back when we lived in Nova Scotia and blogs were still a figment of someone's imagination. It's possible that by posting this photo, I have signed my own death warrant, but then no one has ever called me "restrained"... 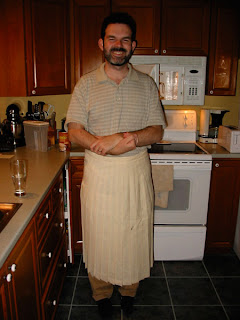 (I collect used wool skirts to cut up and use in my rug-hooking projects. This was one of them. I'm not into cream pleats!)

That said, the Lad is Scottish and he did get married in a kilt...

(He looks a little tense. But at this point, the deed was done and there was no turning back.)

So as you can see, I have a whole lotta love for Mr. Beardo. But I am being sorely tried these days. Last year, the Lad got himself a brand new, gas-powered weed-whipper (or whacker, depending what part of the world you hail from!) The thing is so fearsome that they actually supplied a chest protector with it. Since its arrival, my flowers have quivered in fear. Last Friday, I found the amputated daylily. I thought it was just this one flower that had fallen under the rotating string of death.

I am also now the proud owner of a decapitated crocosima, and this...this... this TRAVESTY: 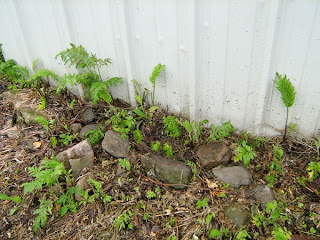 ...which used to be a little flower bed full of THIS: 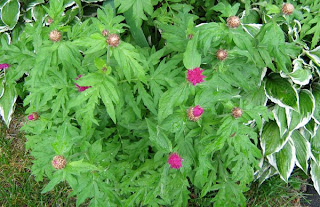 Pretty. Pretty flowers! Prettyprettypretty! Absolutely no freaking resemblance to grass, beyond the sharing of the colour green.
They USED TO add a nice little shot of colour outside the pump house attached to our barn. Now, it looks like a herd of starving, sharp-toothed goats rampaged in the yard while I had my back turned... 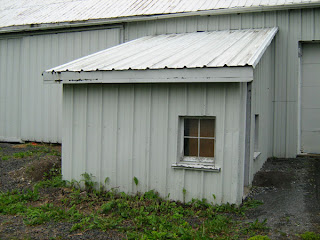 (Note complete and utter absence of perennials.)
But one good thing has come out of this weed-whackin' atrocity. I have discovered The Sisterhood of Chicks Whose Menfolk Can't Control Themselves When They Have a Power Tool in their Hands. TSOCWMCCTWTHAPTITH for short.

The TSOCWMCCTWTHAPTITH (wait, that's redundant. That reads as The The Sisterhood...whatever!) has taken me in, held me in the warmth of their petal-splattered arms, and shared so many tragic, tragic stories of men who can't tell a blade of grass from any other green thing in the universe. (Watch out, frogs! Time to invest in some amphibian chain-mail.) Here is a mere sampling of their desperate cries:

"I feel your pain... My poor butterfly bush has gotten much the same treatment."

" First year after I planted some lilies my son mowed over them."

"I lost a low bush cranberry bush to an overly enthusiastic husband once upon a time. It was a bush for heaven's sake!!"

"Richard took out all of my Siberian iris!"

And on, and on, and on, until I wanted to cry tears of nectar for all the poor dead plants. For the love of all that is green and holy, how on earth could you mistake a LOW BUSH CRANBERRY for GRASS? WTF?!!!!

So sisters, it is time for us to unite. Time for us to ply our menfolk with cheap beer and tater chips and yes, even pizza, and while they are nodding off on the couch in front of the football game, (which won't work for Gordon, since he doesn't watch sports... in his case, it would be nodding off in front of the Wii, were such a thing possible, which it isn't, because a Wii is so stimulating that it can give you seizures) we must stomp out to the garage en masse, spirit away the weed whippers, and hire a LAWN CARE PROFESSIONAL! Preferably a female one. And then our poor little flowers (and low bush cranberries) can breathe a sigh of plantly relief and go on to live full, lush, colourful lives without the threat of weekly mutilation. 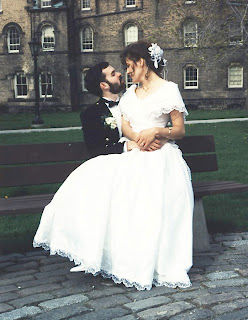 And yes, dearheart, I love you even more than the day we wed, especially since you don't have a blog and can't tell the world about MY foibles!