Cats and a cuppa

So the other day I took a photo of the hens and tea for a little Twitter thing Damien St John of BBC Leicester was promoting -- send in a photo of your cuppa. I decided to send in a photo of Alex and Emily with a cuppa too, and got some rather hilarious shots in the process.

I started paying attention to BBC Leicester because my cousin Geoff is founder and director of Dave's Leicester Comedy Festival, and I listened to Damien St John interviewing Geoff on his radio show. I got to see Geoff the summer before last when he visited Montréal, for the first time since 1977 when we were both kids. We hit it off and I really wish I could see him more often. His Dad is my godfather and my favourite uncle. But I digress. Here are the kitty pics... 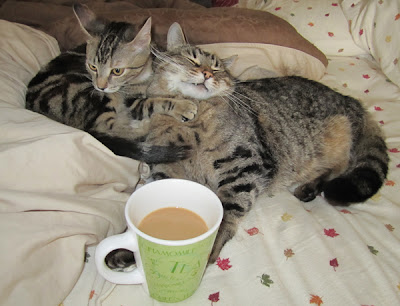 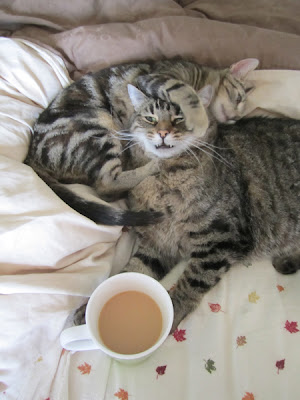 Then I moved the tea before it could spill and destroy our mattress! 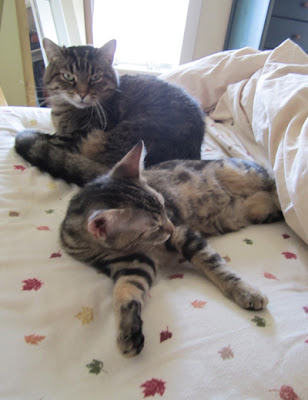 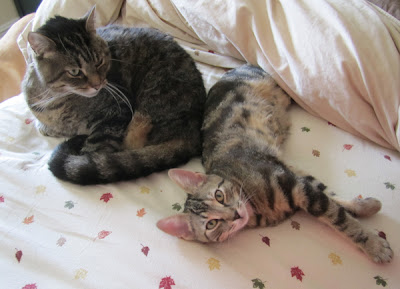 As you can see, these two get along fine, although Emily can be a real pest. She's the same with Naomi, jumping on her head and bugging her. All the cats have been very tolerant with this youngster! She is 4-1/2 months old now and acting like the crazed adolescent she is. :)