According to my honeybees, it's spring!

I would just like to say that the normal high for this day is supposed to be 4C/39F. Instead it is 25C/77F right now! Tomorrow it's supposed to hit 27C/80F and thunderstorms are forecast. I have to say, the weather is just crazy and it worries me. It shouldn't be this hot here at this time of the year. I wonder what effect it's having on the wildlife.

My honeybees were going crazy today.. 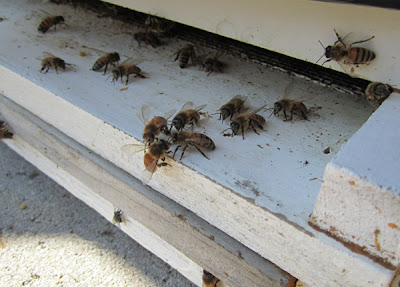 Those four near the front are communicating with each other about something. Perhaps they're discussing a pollen source, because... 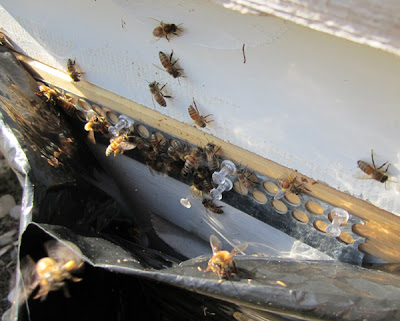 ...they were coming in and out of the hives absolutely loaded with pollen (the yellow blobs on the hind legs of some of the bees.) Bees carry pollen back to the hive in "pollen baskets" on their hind legs. At this time of year, they might be collecting pollen from pussywillows, or possibly maples, other willows or even pine and spruce. There's not a whole lot out there for them yet.

Here's a video of the fun:


Yes, I stood right next to the hive and took all that footage without being bothered. Came back half an hour later without my camera and got stung just under my temple while I was standing quietly behind a hive! Honeybitch! ;)

I'm fine! I barely react to honeybee stings apart from a little redness and pain right after it happens. If you are stung by a bee, the most important thing is to get that stinger out as soon as possible!! I scrape them out with my fingernail. The stinger usually has a venom sac attached to it and will continue pumping venom for a surprising amount of time after the bee has detached herself from it (subsequently dying, having left her innards behind on you!) So if you get stung by a bee (or wasp or hornet), your first priority should be getting the stinger out. Just use your fingernail or a credit card and scrape along the surface of your skin until the sucker is out.

I then put ice on the sting for half an hour. There are many ways to treat a sting, but I find ice works very well. If you swell up (but not in an allergic way!) you can take antihistamines. I have some homeopathic "apis gel" my friend gave me that I always use, because it feels soothing. A paste of baking soda and water is also supposed to help, but I do fine with an ice cube.

I think I've mentioned before that honeybees are usually quite gentle when out foraging. They can be gentle at their hive too, but you never know. Sometimes they're defensive. They were ignoring me today until that rogue bee decided to fly behind the hive and nail me!

And in other farm news... 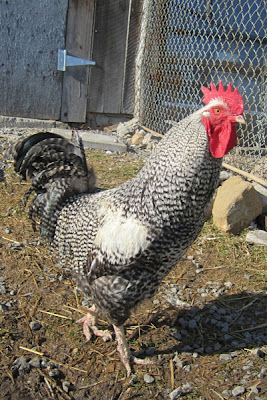 I let the chickens out to mingle with the ducks in their run. Errol Flynn is looking fine! 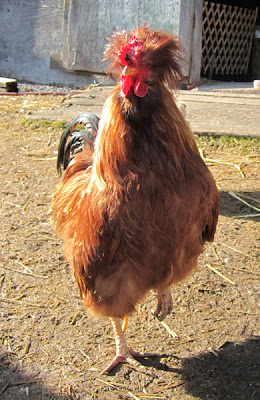 As is Beaker, the sexpot Silkie-cross rooster. 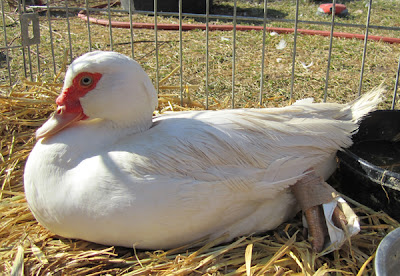 We've been putting Eugenia's cage outside so she can get some fresh air. She is holding her splinted leg out behind her. It seems to be doing okay. She had been standing on her good leg and attempting to put some weight on the splinted one, but not much progress there yet. Barring any disasters developing, I will check what's going on under the splint after three weeks. Jane from the Maple Syrup Mob has given me some very good advice for Mama duck. Thanks Jane! 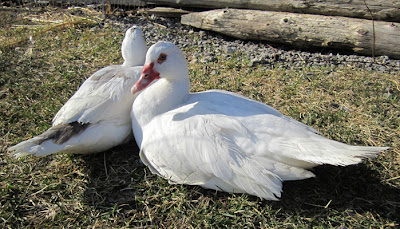 Two of Eugenia's girls sunbathing. I haven't named these two yet. 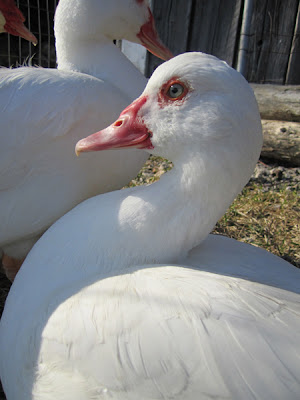 This little girl is particularly sweet and enjoys me petting her. She even seems to like me stroking the top of her noggin.

I'm slowly recovering from my walking pneumonia but it's really worn me out. I'm not used to being short of breath and feeling weak.  But I managed to talk through that whole bee video today without coughing! And I went for a slow walk with Gordon today, which is progress. I am feeling very out of shape and it's driving me nuts. I haven't been to a yoga class in a month and I miss it. I'll see if I can get to one this week.