I've been so busy posting about Mexico (and lying around sick in bed with the bubonic plague, I mean, walking pneumonia -- by the way, I'm not walking much!) that I've put off writing about the duck near-disaster on Monday. Eugenia, aka Mama Duck,  had 12 adorable ducklings last summer and is a very wonderful protective mother. But on Monday, she nearly got dragged away by a fox in broad daylight. Gordon managed to scare the fox off her and save her, but the fox had grabbed her by the left leg, and broke it just above the lowest joint. He also left a small puncture wound which I cleaned out with hydrogen peroxide and slathered with antibiotic cream.

We spent 36 hours trying to get a vet around here to look at her, with no success. It was frustrating, as we have a vet 45 minutes from here that has given us chicken advice in the past. But this week he was busy with some cow emergency and didn't get back to us. I think I am going to have to find a bird vet in Ottawa for future incidents. At any rate, I decided to take matters into my own hands and attempt to set the leg myself. I found this site extremely helpful. I ended up making a splint out of plastic from a yogurt container, plus vet wrap, surgical tape, and a little foam padding. I just hope she's not crippled for life after this... 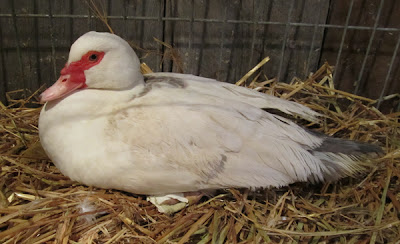 I gently taped her webbed foot flat and open to the bottom of the splint device. The break is just above her "ankle." Ducks' legs are very delicate.

So far Eugenia seems to be doing well. Her son Hannibal often sits next to the cage keeping her company. She's eating, drinking and grooming and doesn't seem to be in any obvious pain. She stands on her good leg and can move her bad leg from the hip down to the break. She hates me as much as she did last summer when she had her ducklings and wanted to kill me every time I went near them! But she was very good when I disinfected and wrapped her leg. She was on her back on Gordon's lap the whole time I worked on it, and it was like she understood  I was trying to help her. I have been checking her foot every day to make sure it's warm and I didn't wrap it too tightly.  She is moving around more every day. Right now we have her in a large dog cage in the duck coop, but this weekend, we want to make her a bigger enclosure in there. I mainly don't want any boy-ducks mounting her while she's recovering!

If anyone has any advice on helping her heal, I'm all ears. I have read varying opinions on how long to keep the splint on, anywhere from two to three weeks to six weeks. Also I am not sure if I should check under the wrap at any point. And are there any over-the-counter painkillers you can give a Muscovy duck?

We do have a fenced run for our duckies, but on Monday Mama flew over the fence with Ronna-duck and one of the youngsters. I was in our upstairs bathroom, getting ready to go out and round them up, when by chance I looked out the window just in time to see a fox streaking up from the field behind the barn. I screamed at Gordon that a fox was outside going for the ducks. He managed to get down there fast enough to scare away the fox, who was on Eugenia's back. Ronna had flown up to the front of our garage, and the young girl-duck was on top of the enclosed chicken run! All very upsetting.

We could clip the ducks' wings to prevent them flying out, or we could net over the whole duck run, which would be a difficult prospect as it's so large. It's tough, because we have to balance their quality of life with safety from predators. (They are pets, not future suppers!) Since Mama has been confined, the other ducks haven't shown much interest in leaving the run. We've been checking on them several times a day when they've been out and are planing on putting up the electric netted fence as a further barrier outside the run (we have to take it down in winter because of the snow.)

So cross your fingers for Eugenia's healing and if you have any advice, fire away.

Here are some happier duck photos from today. Spring came early this year and it has been unseasonably warm. This weekend we are supposed to reach over 20C (pushing 70F.) 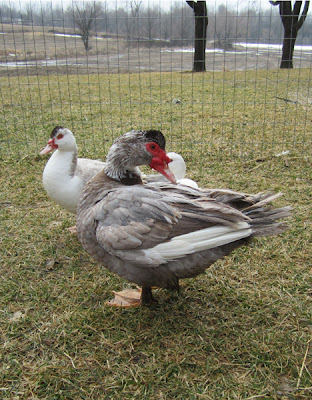 Here's Amy Winehouse, who has turned out to be a boy, with his as-yet-to-be-named sister. I'm thinking of calling Amy "Jamie"... 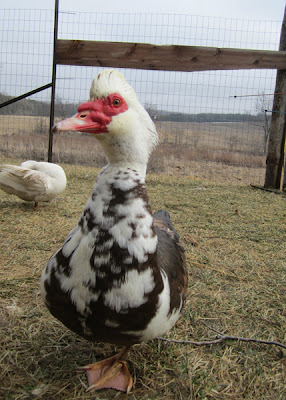 And Hannibal, who is very affectionate with me. Of course, he has also mounted my arm on occasion. He likes having his beak stroked (not a euphemism!!!) 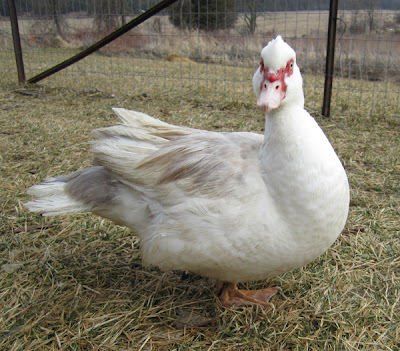 Ronna, who managed to escape the fox attack by flying up to the garage. 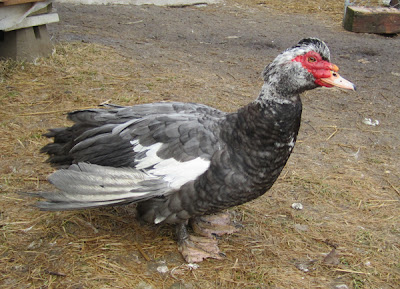 Warren of the flipped wing. He's the Upper Canada Village duck that has been overwintering with us. Personally I hope he doesn't have to go back. 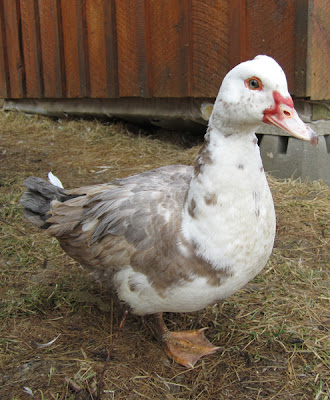 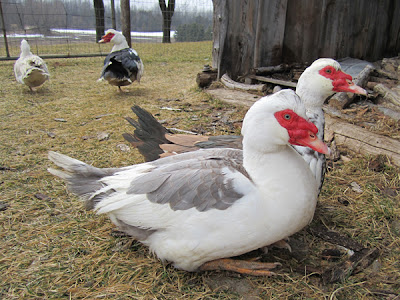 Moishe and Hannibal, with Ronna and Charlie Sheen in the background! 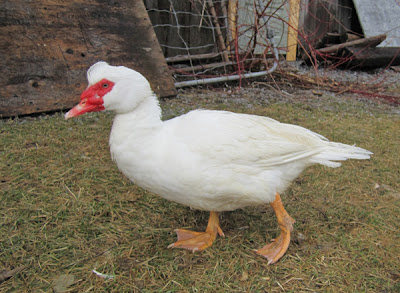 This guy needs a better name than "Purply", which I took to calling him after I had to spray Blu-Kote on his nibbled tailfeathers this winter. 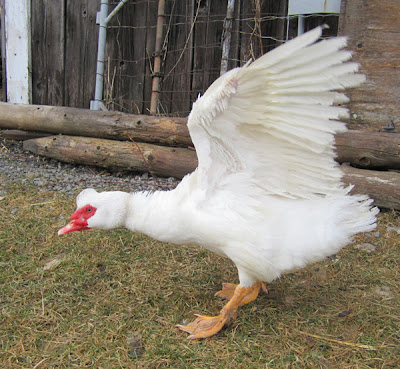 Having a good shake-out!

I'll keep you posted on Eugenia.