My friend Phyllis, aka Spidergurl, aka author extraordinaire, recently adopted a lovely English Setter she has named Dodger (after the character in Oliver Twist.) Dodger, age four, was given up for adoption by a moronic freaking idiot, I mean, by his former owner, because the moronic freaking idiot's, I mean, former owner's new boyfriend doesn't like dogs. Don't get me started.

Dodger doesn't know how lucky he is; Phyllis is one amazing dogmother. She has adopted many dogs before this, including an ancient poodle left homeless after Hurricane Katrina. She nursed him back to health and gave him a marellous retirement. This year Phyllis lost her heart dog Fred, another well-loved senior canine citizen. Recently she decided she was ready to give a home to another needy dog, to join her terrier-mix Ginger (aka "Whinger") and fluffy grey cat Dickens. And so Dodger arrived. 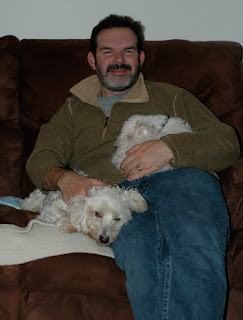 Gordon loves up Fred (l) and Clint (r), while visiting America’s Dairyland (and Phyllis) in October 2006. 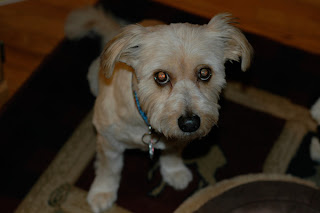 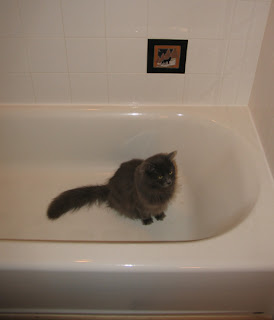 The most amusing part of this is how Phyllis keeps insisting that Dodger is a small dog. Phyllis has had a string of small dogs, ones that actually fit neatly in a lap. Dodger, however, is an ENGLISH SETTER. Now, I have lived with five different English Setters in my life, all belonging to my Mum, the first of which was Gina (who joined the family when I was three) the last of which was Tara, whom I inherited upon my Mum's death in 1997. However small they are, even field English Setters are NOT SMALL DOGS, damn it. Now, Dodger is admittedly a petite boy, but he is NOT SMALL. However, Phyllis refuses to believe this. Therefore, I am posting this photo of Dodger with Phyllis to prove once and for all that Phyllis is completely and utterly wrong. Dodger is a BIG BOY, as evidenced below: 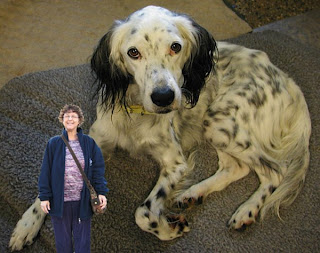